The vase is covered to the exterior with an unctuous glaze of a deep crushed-strawberry tone with turquoise and pale blue streaks thinning to a mushroom tone at the rim. The base is covered in a mottled café-au-lait glaze.

Note: Only a small number of flambé-glazed vessels in this form are known. Compare the present lot with two slightly larger flambé-glazed meipingalso Qianlong reign mark and of the period: one in the Shanghai Museum but formerly in the Zande Lou collection illustrated in Qing Imperial Monochromes: The Zande Lou Collection, The Chinese University of Hong Kong, 2005, no. 49; one included in the exhibition Ethereal Elegance. Porcelain Vases of the Imperial Qing. The Huaihaitang Collection, Art Museum, The Chinese University of Hong Kong, Hong Kong, 2007, cat. no. 69; and one illustrated in The Prime Cultural Relics Collected by Shenyang Imperial Palace Museum, the Chinaware, vol. 2, 2007, pl. 8. 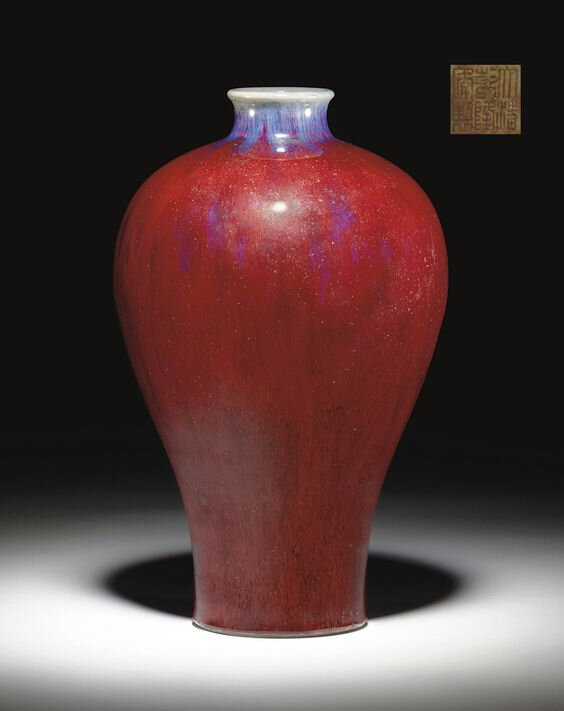 The broad-shouldered, tapering body covered overall with a deep red and flambé glaze streaked in bright milky blue on the waisted neck and shading to a pale milky blue on the lipped rim and interior of the neck.

Provenance: Presented to Mr. Gardner in 1909, and thence by descent in the family to the present owner.

Note: A Qianlong-marked flambé-glazed meiping with slightly broader shoulders and a more splayed foot, formerly in the Zande Lou collection and now in the Shanghai Museum, is illustrated in Qing Imperial Monochromes: The Zande Lou Collection, The Chinese University of Hong Kong, 2005, no. 49. Both the illustrated example and the current lot have an uneven brown glaze on the foot covering the incised six-character reign mark, and it is interesting to note that the two vases are of closely related height (34.2 cm. and 34.9 cm. high) with both having a mouth diameter of 7 cm.