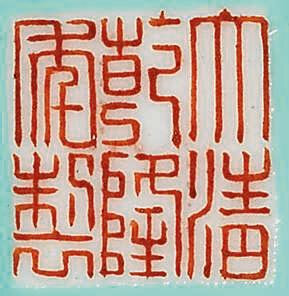 The body is of slightly compressed spherical shape, surmounted by a fluted domed neck and drum-shaped top, brightly enamelled with the Eight Buddhist Emblems, bajixiang, alternating with stylised lotus blooms on a lemon-yellow ground. The colourful decoration to the neck imitates a Tibetan banner, below the top with florets enclosed by flower scrolls. The interior and base are enamelled in turquoise.

Note: This rare form of altar vase, known as benbaping in Chinese, was made to contain Sacred Plants for rituals associated with Lamaist Buddhism, and is related to ewers used to contain Sacred Water for ritual washing. The ewers share with the vases the same globular body and drum-like upper section, but with the addition of a spout emanating from a dragons's mouth. An example of this type of ewer is illustrated by R. Kerr in Chinese Ceramics - Porcelain of the Qing Dynasty 1644-1911, Victoria and Albert Museum Far Eastern Series, London, 1986, p. 115, no. 101. The form of the current vase is even more closely related to the gold Bum-pa urn which contained the ivory plaques used to confirm the identity of boys who were the reincarnated Grand Lamas (see Treasures from Snow Mountains - Gems of Tibetan Cultural Relics, Shanghai Museum, 2001, p. 50, no. 4).

The colourful banding seen on the neck of the current vase and the green ground example in the Shanghai Museum has been painted to resemble the multi-coloured silk banners, often hung in cylindrical form, in Buddhist temples. Examples can be seen in the Hall of Long Life of the Potala illustrated in The Potala, Encyclopedia of China Publishing House, Beijing, 1995, p. 52, no. 11.