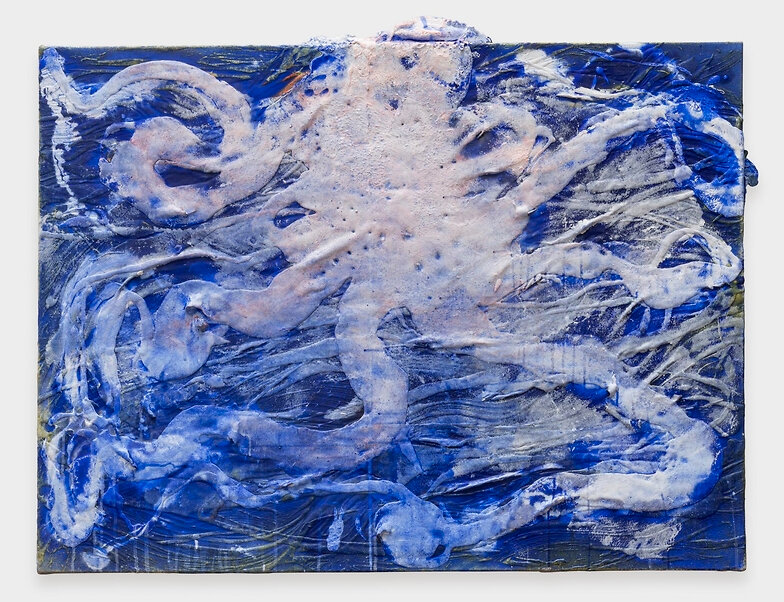 SALZBURG.- Galerie Thaddaeus Ropac is presenting the exhibition On the sea, with new works by Miquel Barceló.

As one of the most important representatives of Spanish contemporary art, Barceló is known for his pastose, relief-like mixed media and expressive ceramics, which also show influences from Catalan tradition and from his travels to West Africa. The artist’s native Mallorca, and in particular the view from the terrace of his home in Farrutx, inspired this new series of seascapes, in which the sky dominates the composition.

The pastose application of paint renders the moist sea air, giving the pictures an atmospheric quality. Barceló paints water and air in shades of white and blue. Elements merge to create a world marked by transience. The changing forms of the sea and clouds are captured with a soft touch which blurs any defined outline. The shapes are nebulous, as though the sky could stand for the sea, and conversely. Paradoxically, Barceló renders liquidity with a dry surface.

Most titles evoke a transitory moment, and at times a nostalgic mood: Ce matin tôt (Early this morning), Fin juin début septembre (End of June early September), Fin août il y a longtemps (End of August a long time ago), La baie trop calme (Too still the bay), which recalls the Impressionists' attention to the fleeting effects of light, atmosphere and motion. Barceló's home-made pigments give substance to his paintings, and the tactile quality of matter is central to his work. As French philosopher Jean-Luc Nancy writes: “The raw material is so basic and primitive that it never remains in one state or in its original stasis. It has always already begun to assume a form, informing and deforming itself, transforming itself in keeping with its own permanent inaccuracy. […] It is a question of affect, of affectivity or affectibility – of a material whose entire essence is to be affectible.” (Jean-Luc Nancy, 2001)

Barceló grew up in an environment of cliffs and caves next to the sea, which has become the key affective element in his landscapes. The underwater world also populates his imagination. Sea creatures seem to float on dark blue backgrounds, occupying the entire pictorial space. Sometimes their limbs even go beyond the edge, conveying a sense of vitality and motion that cannot be contained. He has dived and caught octopus, squid and fish since childhood, and has often compared the act of painting to diving: “For me, diving is very close to painting. To float in space, you are parallel; in the sea it happens down there. And sometimes we are underwater for more than two minutes; we are still. If you move in that space, you lose oxygen.” (Miquel Barceló, 2013) Born in 1957 in Felanitx on the island of Mallorca, Miquel Barceló lives and works in Paris and Mallorca. In 1983, he made his first trip to Africa, living in the city of Gao in Mali. From this point onwards, he travelled and divided his time between Paris and Mallorca with prolonged and solitary periods in Mali, which strongly influenced his artistic career.

Barceló gained international recognition after his participation in the São Paulo Biennial in 1981 and in documenta 7 in Kassel in 1982. In 2009 he represented Spain at the 53rd Venice Biennale. His work has been exhibited at Centre Pompidou, Paris (1996), Museo Reina Sofia, Madrid (1999), Musée du Louvre, where he showed over 300 drawings illustrating Dante’s Divine Comedy (2004), Museo Rufino Tamayo, Mexico (2005), Museo d’Arte Moderna, Lugano (2006), Irish Museum of Modern Art, Dublin, and CAC Centro de Arte Contemporáneo, Málaga (2008), Bank Austria Kunstforum, Vienna (2012), Bibliothèque Nationale de France and Musée Picasso, Paris (2016). Barceló’s public commissions include large-scale sculptural installations in the Chapel of Saint Peter in the Cathedral of Palma de Mallorca (2001-2006) and the Human Rights and Alliance of Civilizations Chamber at the United Nations Headquarters in Geneva (2008). His work is included in many distinguished public and private collections worldwide.

The exhibition is accompanied by a fully illustrated catalogue with a text by Mario Vargas Llosa, one of Latin America's most significant novelists and a Nobel Prize winner.