NEW YORK, NY.- Sotheby’s spring auctions of 20th Century Design concluded yesterday in New York with an impressive total of $25.1 million – surpassing the series’ high estimate of $21.6 million. Nearly 400 lots were offered over the course of two days, with an outstanding 87.2% of lots sold overall.

The series began Wednesday with a sale dedicated to the largest single offering of Thomas Molesworth furniture in more than 20 years. Strong demand for these rare designs drove three-quarters of all lots to sell above their high estimates. That evening, Sotheby’s held an auction of art and design from the celebrated homes of Delphine and Reed Krakoff, with an $8.7 million result that was propelled by intense competition for the iconic work of Les Lalannes. And Thursday’s various-owner auction of Important Design was led by an extraordinary ensemble of Jean Royère furniture, which set a new world auction record for any work by the famed French designer when his “Étoile" Sideboard sold for $1.8 million.

Jodi Pollack, Co-Worldwide Head of Sotheby’s 20th Century Design Department, commented: “We are thrilled with the exceptional results of our sales this week in New York. The diverse pool of international bidders that participated across all three auctions is a testament to the superlative quality of the works themselves, and the continued strength and momentum we are seeing across all markets – from Prewar to Postwar Design, and from American to European material. Collections showing the unique vision of their former owners continue to lead the market, from idiosyncratic works by Molesworth to a modernist ensemble by Royère. Our outstanding performance this week reinforces the global strength and demand in the Design markets, and the unrivaled expertise of Sotheby’s global 20th Century Design team.”

Below is a look at the important pieces and collections that drove this week’s sales in New York:

IMPORTANT DESIGN
Auction Total $13.7 Million
Following the highest-ever total for a various-owner Design sale in December, Sotheby’s achieved their second-highest total this May. An extraordinary six-lot ensemble of Jean Royère furniture from the famed Dumont Commission led Thursday’s sale of Important Design, achieving an outstanding overall total of $4.2 million – multiples of the group’s $1.7 million high estimate. Commissioned in 1958, the ensemble was topped by an exquisite “Étoile" Sideboard, which shattered its high estimate of $300,000 when it achieved $1.8 million – a new world auction record for any work by the renowned French designer. In addition to the “Étoile” designs, the same 1958 commission featured examples of Royère’s "Ours Polaire" seating, led by a Pair of "Ours Polaire" Armchairs that realized $795,000 (estimate $350/500,000). 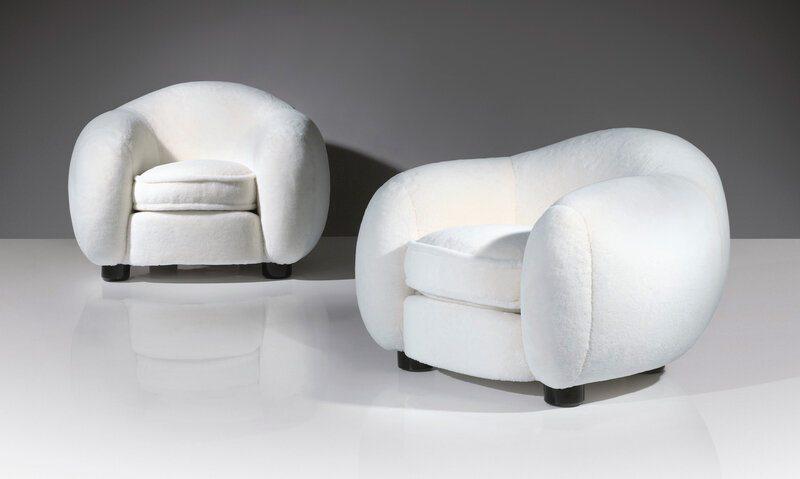 François-Xavier Lalanne’s “Sauterelle” Bar achieved the second-highest price from yesterday’s auction, sold to a telephone bidder for $1.6 million (estimate $800,000/1.2 million). Executed in 1970, the exquisite Surrealist object is at one moment a whimsical, larger-than-life sculpture of a grasshopper, and the next, its body opens to function as a bar. Sauterelle is one of only two examples of this rare design; the other was presented as a gift by President Georges Pompidou to Queen Elizabeth II and the Duke of Edinburgh in 1972, where it remains in their collection today. Thursday’s sale opened with a strong selection of Tiffany Studios works, led by an important “Elaborate Peony” Table Lamp that sold for $735,000 (estimate $400/600,000). The lamp has remained in the collection of a distinguished Brazilian family since the early 20th century, and exemplifies Tiffany’s unparalleled ability as a colorist. 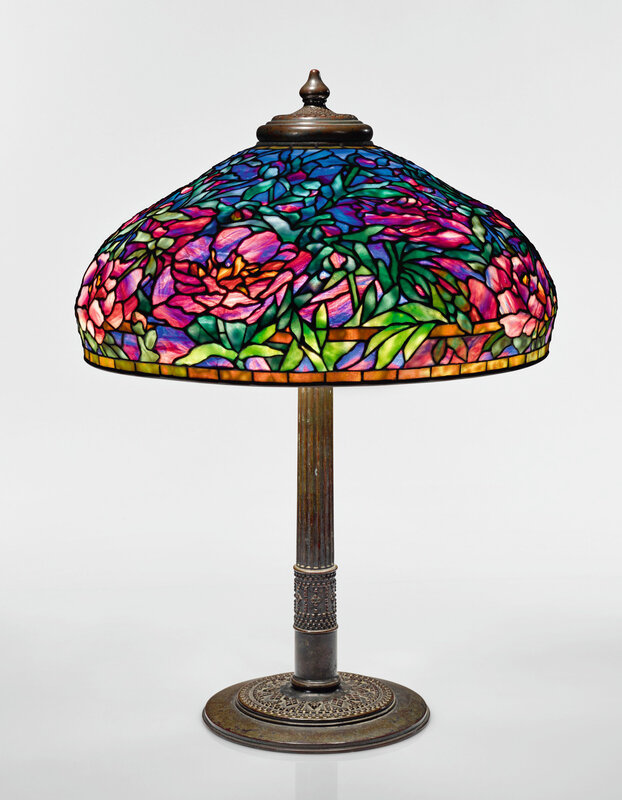 A COLLECTION THAT WE DREAMT OF: ART AND DESIGN FROM THE HOMES OF DELPHINE AND REED KRAKOFF
Auction Total $8.7 Million
Top prices in Wednesday’s evening sale dedicated to art and design from the celebrated homes of Delphine & Reed Krakoff were dominated by exquisite works by Les Lalanne. The offering of iconic “Moutons de Laine” by François-Xavier Lalanne – comprising five wool ottomans, one white sheep and one black sheep – together totaled $2.3 million, nearly doubling their combined high estimate. The group was distinguished by a rare black sheep, which set a new auction record for a single “Mouton de Laine” when it sold for $735,000 (estimate $400/600,000). Highlights of Claude Lalanne’s work included a “Crocodile” Armchair that achieved $735,000 (estimate $500/700,000), and a Unique "Aux Branchettes" Chandelier that fetched $399,000 (estimate $150/250,000). 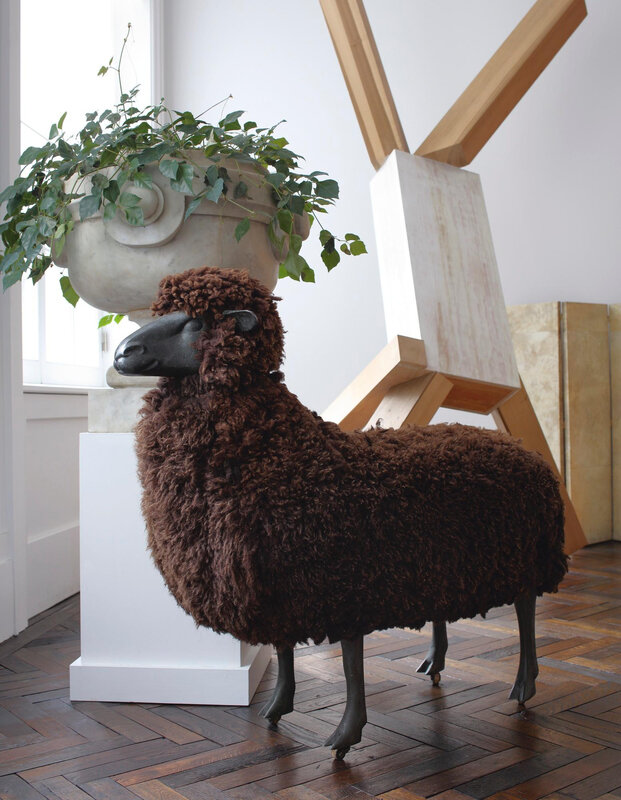 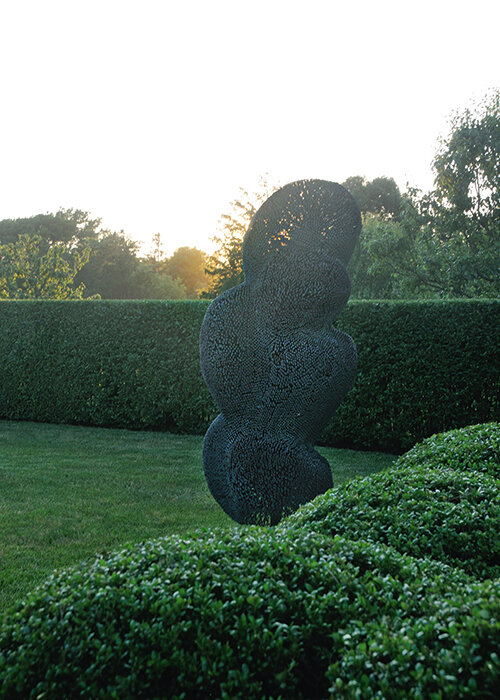 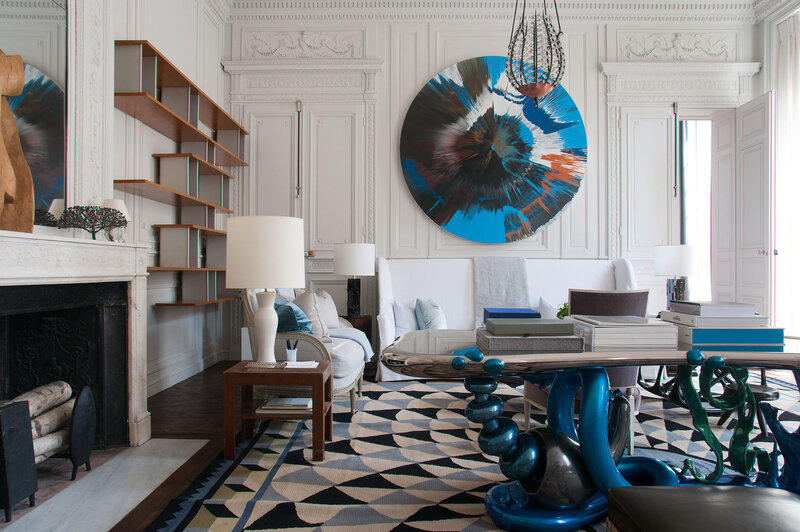 Collected by the creative visionaries over the course of nearly two decades, the 140+ pieces on offer lived in one or more of the Krakoffs’ impeccably-designed residences: their New York City townhouse, the famed Lasata estate in East Hampton, the sprawling Clark House in New Canaan, Connecticut, and their historic 18th-century home in Paris. The collection presented by Sotheby’s this May exhibited an encyclopedic range of works by leading artists and designers, spanning centuries of genres and styles – from 18th- and 19th -century American and French furniture to Pre-War, Post-War and Contemporary Design, Contemporary Art, and beyond.

THOMAS MOLESWORTH: DESIGNING THE AMERICAN WEST | THE RUTH AND JAKE BLOOM COLLECTION
Auction Total $2.7 Million
The Wednesday sale dedicated to 65 pieces of Thomas Molesworth furniture from the Collection of Ruth and Jake Bloom represented the largest auction offering of these highly-coveted designs in more than 20 years, and established new top 10 auction prices for works created by the designer. Prolonged bidding battles on the phone and in the room drove an impressive three-quarters of all lots on offer to achieve prices above their high estimates – led by an exceptionally-rare Octagonal Games Table that sold for $225,000 (estimate $50/70,000), and Four Early Panel Back Armchairs from O.T.O. Ranch, Montana that achieved $150,000 (estimate $40/60,000). One of Molesworth’s earliest commissions, the “O.T.O” Ranch once hosted notable guests such as Theodore Roosevelt and Marcellus Hartley Dodge (son-in-law of William Rockefeller), and is where some of his quintessential designs first gained traction among the country’s elite. 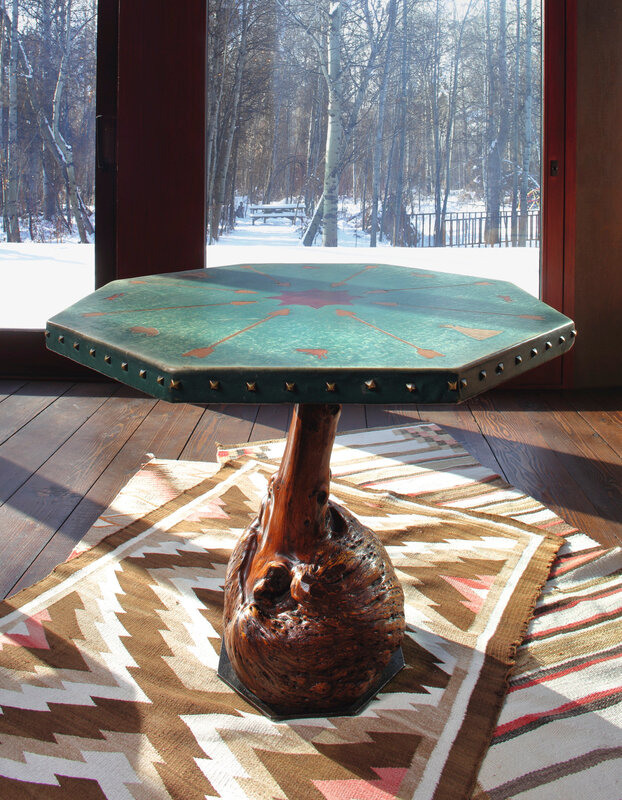 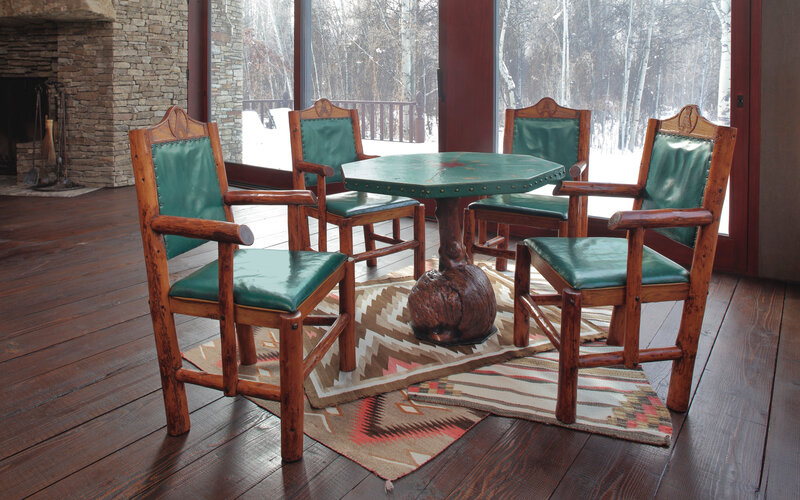 STRONG BIDDING DRIVES THOMAS MOLESWORTH SALE TO DOUBLE ITS HIGH ESTIMATE
Lauded for establishing a truly western interior design aesthetic in the early 1930s, Molesworth’s genius was rooted in his remarkable ability to create an idiosyncratic style that was romantic and unique, yet cosmopolitan and familiar. With thoughtful curation and a commitment to Molesworth’s signature western vernacular, the Blooms seamlessly interlaced his distinct pieces – characterized by knotty wood burls, vibrantly-colored leathers and woven Chimayo cushions – with captivating examples of Contemporary art in their serene Sun Valley-home. The result was a refreshingly-daring juxtaposition of these two genres and a timeless representation of the western American aesthetic.