Boldly and thickly carved utilising the natural curve of the horn as a naturalistic furled lotus leaf vividly curling outwards at the irregularly-shaped rim to form a deep vessel, decorated in low relief with subtle veining around the exterior, raised on a short separate base, the material of rich honey tone.

Provenance: Sotheby's London, 13 November 1972, lot 19
Spink & Son Ltd., London
A distinguished European private collection, on loan to the Oriental Museum, Durham, from the mid-1970s to circa 2011.

Note: The present lot is rare for its impressive size and thickly carved walls, displaying an outstanding craftsmanship in the undulating and smoothly curved edges creating a naturalistic shape of a lotus leaf, conveying a sense of vitality.

Compare a rhinoceros horn cup also thickly carved in the form of a lotus leaf with an additional decoration of dragons and waves, 17th century, and another, but smaller cup carved as a lotus surrounded by aquatic plants and fauna, 17th century, illustrated by T.Fok, Connoisseurship of Rhinoceros Horn Carving in China, Hong Kong, 1999, pls.47 and 86 (which was later sold at Sotheby's Hong Kong, 8 October 2013, lot 3248); and see also another related lotus-shaped rhinoceros horn cup, in the Chester Beatty Library, Dublin, illustrated by J.Chapman, The Art of Rhinoceros Horn Carving in China, London, 1999, p.166, pl.207. 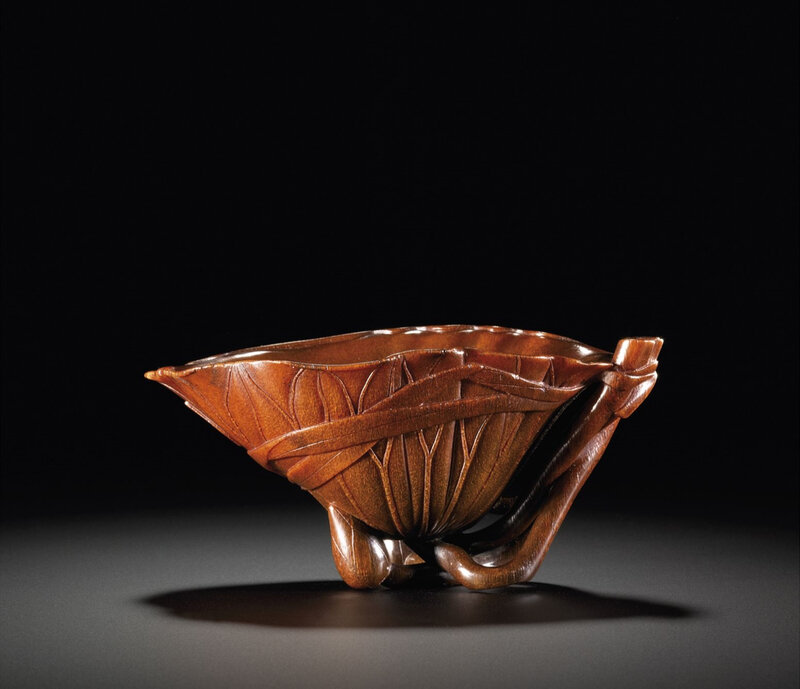 the well-polished horn of chestnut tone, carved in low relief around the exterior of the shallow wide-mouth cup with the fine veins of a furled lotus leaf, enveloped by two thin reeds, the openwork handle on one side with three intertwining stalks tied together by the tips of the reeds and extending to the base, resting on two small lotus bud feet, the interior left plain save for the subtle wavy contours imitating a leaf's natural shape, wooden stand.

Note: his cup is a superb example of what is possibly one of the most popular decorative themes in the rhinoceros horn carver's repertoire – the lotus leaf and flower. While it displays characteristic elements seen on cups of this design, such as the veining on the exterior of the leaf, the lotus stems and buds, this vessel stands out for the unusual fashioning of its foot which is in the form of three entwining stalks.  The carver has created an openwork design by binding the stalks together with the millet grass. While stalks are frequently made into a ring-base for the vessel, this carver has created an original design. Nature was also on the forefront of the carver's mind when rendering the veins of the leaf which he has outlined in low relief rather than simply incising them.

The millet grass that binds the lotus leaf and the stems is important for a number of reasons; it gives the design a sense of strength; and the combination of the lotus leaf and millet grass together form the visual pun hehe (harmony) that expresses the wish for 'living in harmony year after year'. The lotus itself is the symbol of purity and uncontaminated beauty, and is associated with the pure and virtuous character of the gentry and scholar-literati.

Edward Chow in his notes describes the cup as keai ji zhi ('beautiful and adorable') and praises the skills of the carver for producing a delicate piece which he found unusual for its time. He also mentions that the cup is 'in the style of Cheng and Hong (you Cheng Hong zuo feng)'. Cheng Hong represents the period between the Chenghua and Hongzhi reigns of the Ming dynasty, suggesting a strong Ming period influence on the decoration.

Although no other similar example appears to be recorded, a cup from the Murray bequest and now in the Victoria and Albert Museum, London, illustrated in Craig Clunas, Chinese Carving, London, 1996, fig. 31, uses two intertwining stems to form the base that extend upwards to become the handle of the vessel. Another related cup is published in Dr. Ip Yee, 'Notes on a collection of Chinese rhinoceros horn carvings', International Asian Antiques Fair, Hong Kong, 1982, p. 35, pl. 28; and a third, in the form of a large lotus leaf carved with the lotus stalks and millet grass tied together by a ribbon, from the collection of Thomas Fok, is included in Thomas Fok, Connoisseurship of Rhinoceros Horn Carving in China, Hong Kong, 1999, pl. 97.