A fine and very rare blue and white double-gourd vase, Qianlong six-character seal mark in underglaze blue and of the period

A fine and very rare blue and white double-gourd vase, Qianlong six-character seal mark in underglaze blue and of the period 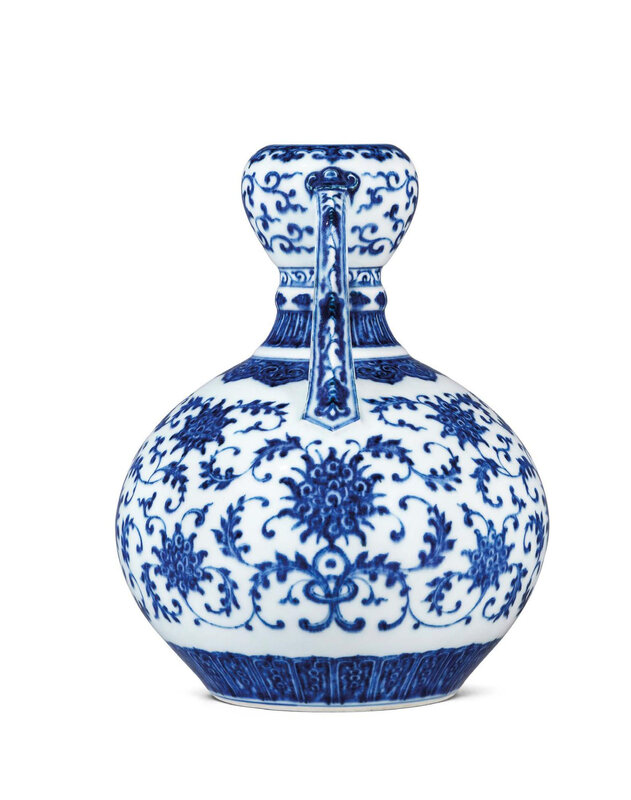 The vase is well painted around the globular body with a lotus scroll between ruyi-heads encircling the shoulder and lotus lappets around the foot, the collared neck with further formal borders, all below the bulbous mouth decorated with further scrolling lotus within a trefoil border, flanked by a pair of strap-shaped handles with ruyi-head terminals, box.

Exhibited: Ming and Ch’ing Porcelain from the Collection of the T. Y. Chao Family Foundation, Hong Kong Museum of Art, 1978, illustrated in the Catalogue no. 88.

Note: The present vase is the only known Qianlong example of this large size. The only other Qianlong-marked double-gourd vase of this pattern is a slightly smaller (18.8 cm.) example, sold at Sotheby’s Hong Kong, 3 May 1994, lot 174. This particularly elegant form also appears in famille roseduring the Qianlong reign, see, for example, the pair of ‘butterfly’ vases sold at Christie’s London, 9 May 2017, lot 99 (fig. 1). Cf. my post: A magnificent pair of famille rose 'butterfly' double-gourd vases, Qianlong six-character seal marks and of the period

The form first appeared during the Yongzheng reign, when they were made in considerably greater numbers and in several different decorative types, and can be divided into two size groups, one just exceeding 26 cm. in height, the other around approximately 23 cm. in height. For blue and white Yongzheng examples, see a vase (26.5 cm.) painted with fruiting and flowering branches on the lower body in the National Palace Museum, Taipei, illustrated in Harmony and Integrity: The Yongzheng Emperor and His Times, Taipei, 2009, p. 207, no. II-33; and another painted with a composite floral scroll on the lower body (22.9 cm.) from The British Rail Pension Fund, sold at Sotheby’s Hong Kong, 16 May 1989, lot 38. Compare, also, to two Yongzheng copper-red and underglaze-blue decorated examples decorated with lotus scrolls, one (27 cm.) in the Tianjin Municipal Museum, illustrated in Porcelains from the Tianjin Municipal Museum, Hong Kong, 1993, no. 146, the other (23.5 cm.) in Nanjing Museum, illustrated in The Official Kiln Porcelain of the Chinese Qing Porcelain, Shanghai, 2003, p. 128; and several celadon-glazed examples, which appears to have been the most popular type, including a moulded example in the Palace Museum, Beijing, illustrated in The Complete Collection of Treasures of the Palace Museum: Monochrome Porcelain, Hong Kong, 1999, pp. 142-143, no. 130 , and five other plain examples in the National Palace Museum, Taipei, as listed on the museum’s online archive; and a further robin’s egg-glazed example in the Chang Foundation, illustrated by J. Spencer, Selected Chinese Ceramics from Han to Qing Dynasties, Taipei, 1990, pp. 302-303, no. 132.

Commentaires sur A fine and very rare blue and white double-gourd vase, Qianlong six-character seal mark in underglaze blue and of the period