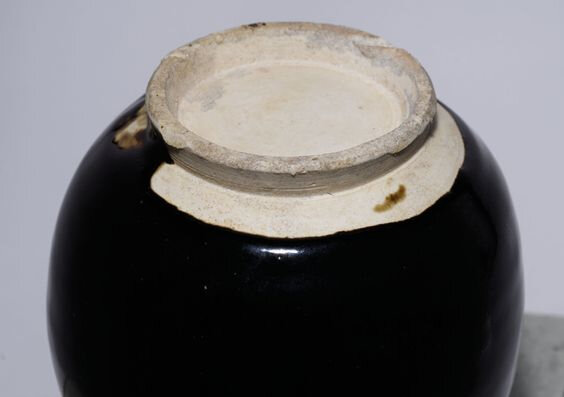 The vase is finely potted with a pear-shaped body rising to a long neck and flared mouth, covered with a thick, opaque black glaze embellished with gilt decoration. The glaze stops short above the foot, exposing the greyish-white body, box.

In 2009, a comprehensive excavation took place at the Ding kilns in Quyang, Hebei province, carried out by the Hebei Cultural Relics Institute and School of Archaeology and Museology at Peking University. Archaeologists concluded that the production of Ding wares can be divided into six phases, the earliest dating back to mid-Tang period, with production centered around the Jianciling kilns; the last phase during the Yuan dynasty, around the Yancun area.

Sherds of a black-glazed vase of very similar form to the present lot were excavated from Section C of the Jianciling area, dating to the fourth phase, around the late Northern Song dynasty (fig. 1). While this excavated vase was not complete, it is evident that its mouth, neck and body bear resemblances to the present lot, allowing us to date the latter to the late Northern Song dynasty.

Brown and black-glazed Ding wares were made as early as the mid-Tang period, but they often lack fineness, and have coarse and thick bodies. Towards the mid-Northern Song dynasty, we see a remarkable improvement in the quality of Ding wares in general. Notably the period witnessed an increase in number of very fine brown and black-glazed wares, as well as a greater variety of forms such as bowls, cups, cup stands, truncated meiping, covers and alms bowls (fig. 2). These wares are characterised by a very fine, white and thin body, as well as an iridescent, lustrous and fluid glaze. These fine brown and black-glazed wares only took up about 0.1-0.2% of all the findings in the excavated areas at the Ding kilns, suggesting they were intended to be high-end products made in limited quantities. Their extent of production was also relatively small, centering around the Jianciling kiln area. 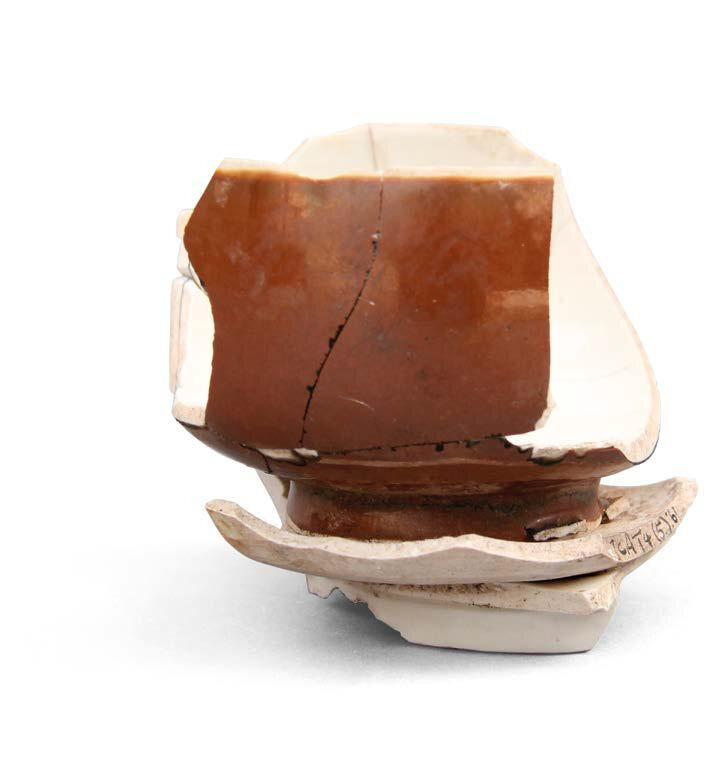 During the late Northern Song dynasty, the production of brown-glazed Ding wares had gradually come to cessation, while that of black-glazed wares had increased considerably, but of diminishing quality. The clay body is noticeably heavier, while the glaze is thicker and not as lustrous as before, often barely touching the foot (fig. 3). The proportion of black wares found among contemporaneous Ding wares had climbed up slightly to 2-3%, reflecting black wares had gained popularity during the late Northern Song period, but were still much rarer than other Ding types. Towards the Jin dynasty, the production of monochrome brown and black Ding wares had been halted, replaced by a large number of wares with roughly mixed brown and black glazes, very light bodies and often times moulded decorations. During the Yuan dynasty, the making of fine Ding wares came to an end all together, with only coarse black wares remaining in production. Through studying the characteristics of black Ding wares during the various stages of production, we can determine the present lot is typical of those made during the late Northern Song period, which were exclusively made at limited quantities. Another important point to note is that during the Northern Song period, a very small number of wares were applied with gilt decorations. This decorative scheme rarely appears on northern wares, and is almost exclusive to Ding wares. Among extant pieces, there are relatively more brown-glazed Ding wares decorated with gilt motifs, but very few black Ding pieces as such. A few examples include a black Ding bowl with gilt lotus decorations, in the MOA Museum of Art, Japan, illustrated in So ji [Song ceramics], Tobu Museum of Art, Tokyo; The Museum of Oriental Ceramics, Osaka; Hagi Uragami Museum, Hagi, 1999, catalogue no. 37; another black Ding bowl with gilt peony motifs, in The Museum of Oriental Ceramics, Osaka, ibid., no. 38, both designated as ‘Important Cultural Property’ in Japan. A black Ding bowl with gilt decorations was excavated from the site of the Goryeo imperial palace, currently in the National Museum of Korea, illustrated in Chinese Ceramics at the National Museum of Korea, Seoul, 2007, p. 448. Hence one can conclude that Ding wares with gilt motifs are extremely rare, and black Ding examples are even more so.
(From the Chinese essay by Qin Dashu)

The result of Oxford Authentication thermoluminescence test no. PH073/736 (7 February 2007) is consistent with the dating of this lot.