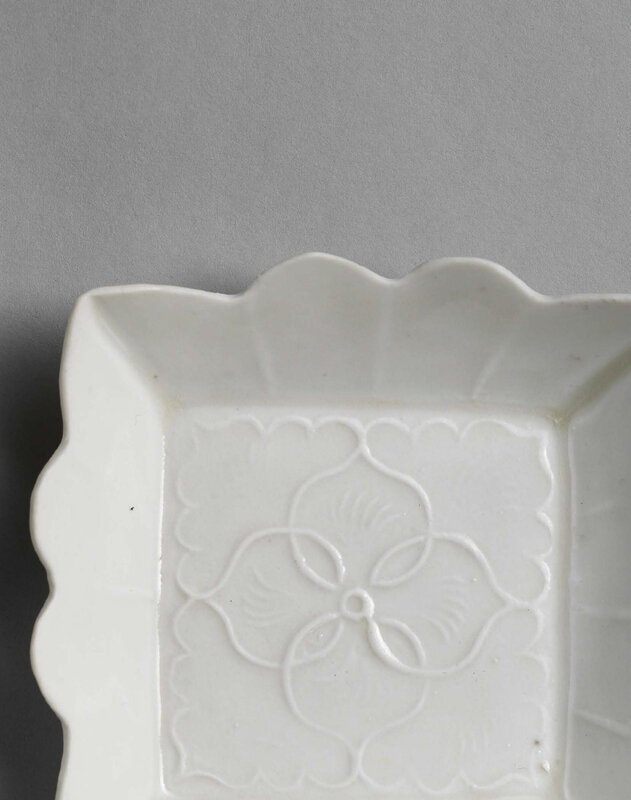 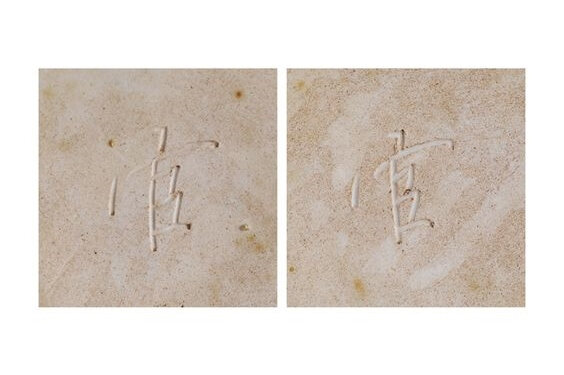 The flared sides that rise from the flat base to the foliate rim are decorated to the interior cavetto with a raised line of slip separating each petal above the quatrefoil motifs in the bottom of the interior. Each dish is covered overall with a clear glaze except for the unglazed base incised with a guan (official) mark.

Note: Combining rare form, delicate decoration, and most importantly guan (official) marks, this pair of square dishes represents the finest Ding wares produced in the 10th century and appears to be unique. During the late Tang to Five Dynasties period, Ding replaced Xing ware as the producer of the finest white ceramics. It was during this period that Ding wares began receiving the long-lasting patronage from the imperial court. According to the ceramic scholar Quan Kuishan, the character guan on Ding wares refers to the Taiguanshu under the Guanglusi, which was the Ministry of Imperial Household responsible for dietary and beverage supplies at court, see Quan Kuishan, ‘Tang Wudai shiqi dingyao chutan’, Palace Museum Journal, 2008, no. 4, p. 50. Lu Minghua from the Shanghai Museum found in the Quyang xianzhi (Gazette of Quyang County) a record of Feng Ao, one of the donors of a stele erected in the 4th year of Xiande era of the Later Zhou dynasty (AD 957). Among Feng Ao’s various titles, there is one requiring him to supervise the taxations of ceramics. Lu Minghua argued that given the rank of Feng Ao, he was probably also responsible for supervising ceramic production for the court, see Lu Minghua, ‘Identification of Characters “?” (ying) on the Xing Ware and “??” (yiding) on the Ding Ware’, The Bulletin of the Shanghai Museum, vol. 4, 1987, p. 261. As such, it is possible that the guan-marked Ding wares were commissioned by the Taiguanshu and produced under the supervision of court officials. fig. 1. One of a pair of Ding foliate-rim square dishes decorated with peony motif in the Collection of the Hebei Institute of Cultural Relics. 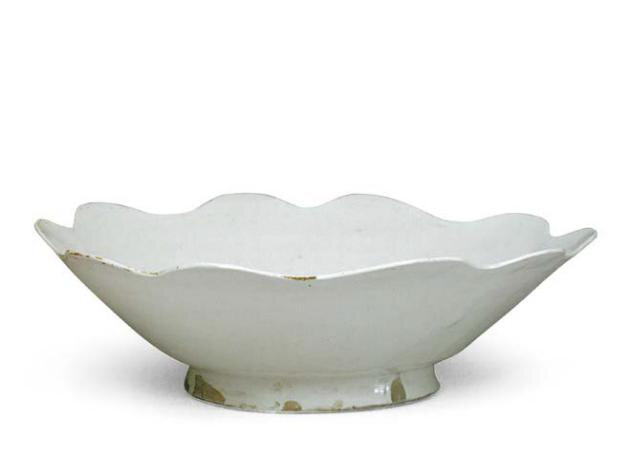 fig. 2 A guan-marked foliate bowl in the Collection of the National Palace Museum, Taipei