An important and extremely rare imperial yellow jade hanging vase and cover, heting you, Qianlong incised mark and of the period

An important and extremely rare imperial yellow jade hanging vase and cover, heting you, Qianlong incised mark and of the period The vase is in the shape of an archaic bronze you, superbly carved on each side with a ram’s head in high relief, the shoulders flanked by a pair of loop handles enclosing an overarching rope twist handle. The base is carved with the reign mark in seal script. The interior base is incised with two pictorial characters he and ting. The oval cover is surmounted by a bud finial, the underside incised with three characters in seal scriptyong bao yong ‘To be eternally treasured’. The material is of an attractive chestnut yellow tone with areas of pale russet, box.

This exquisite vase is of the most attractive, rich yellow tone, known as gan huang (literally ‘sweet’ yellow). As early as 1388, it is recorded in the Gegu yaolun, ‘The Essential Criteria of Antiquities’, that ‘the most valuable yellow jade should be stones with the colour of the chestnut kernel, known also as gan huang. The smoky yellow is the next in quality’, (see Sir Percival David, Chinese Connoisseurship, London, 1971, p. 120). It is interesting to note that a matching record from the Qing palace archives can be found, which identifies the present vase as gan huang. According to the Comprehensive Records of the Zaobanchu Workshops, on the twenty-fifth day of seventh lunar month of Qianlong twenty-first year (1756) (fig. 1):

‘The eunuch Hu Shijie presented a gan huang yellow jade hanging you. It is decreed: Have Zhu Cai carve the characters “he ting” onto the interior base, and “Qianlong nian zhi” reign mark on the base, as well as “yong bao yong”on the underside of the cover.’ The above description matches every aspect of the current yellow jade vase, including the shape, colour and inscriptions. He ting refers to the name of a Zhou dynasty bronze you known as the he you, bearing two clan emblems very similar to the he ting inscriptions on the current vase, illustrated in Xiqing Gujian, ‘Inspection of Antiques from Zhou Dynasty’ (fig. 2). This bronze he you, previously in the Qing Court Collection, is now in the National Palace Museum and re-dated as late Shang dynasty, illustrated in Shang Ritural Bronzes in the National Palace Museum Collection, Taipei, 1998, p. 353. 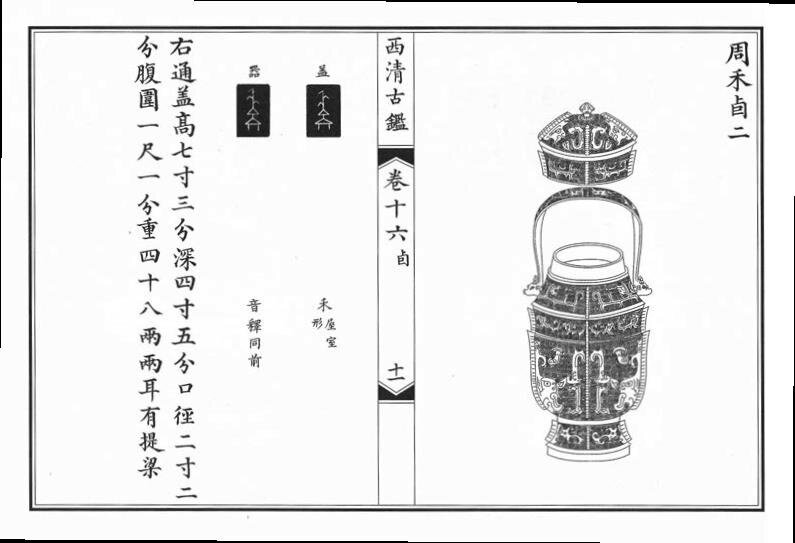 The jade craftsman, Zhu Cai, according to the above record was appointed by the Qianlong Emperor to carve inscriptions on this jade vase. Zhu was a well respected jade carver selected by the Suzhou Central Bureau of Textiles to serve at the palace jade workshop inside the Zaobanchu in the early Qianlong reign. His name is frequently found in the Zaobanchu records between the Qianlong eighth to twenty-second year, in which he was often ordered to inscribe reign marks or Imperial poems, and to execute intricate diaper ground designs on jade pieces, as well as to carve Imperial seals. In the Qianlong fifteenth year (1750), Zhu was ordered to inscribe an Imperial poem on a jade cup, on which a Qianlong yuwan mark ‘Imperial plaything for Qianlong’ was inscribed. This is the first time a Qianlong yuwan mark had appeared on any Imperial jade pieces. In the following year, Zhu was ordered to inscribe an Imperial poem on a celadon jade album, which included his name on the last leaf of the album. This is the only known Qing Imperial jade piece bearing the name of a jade carver, reflecting the high regard the Qianlong Emperor had for Zhu Cai.

Palace records also reveal that the Qianlong Emperor was very particular in his desire for inscriptions on jades. It is recorded that on the twenty-ninth day of the fourth lunar month of the Qianlong twenty second year (1757), the Emperor selected a white jade bowl to be inscribed with a Qianlongyuwan mark. The Emperor decreed: ‘Have the mark incised at one fen (~3.2 mm.), if not, then at seven or eight li (~2.24 or 2.56 mm.)’. This clearly indicated the Emperor had a preference for deeply carved reign marks on jades as exemplified by the mark on the current yellow jade vase.

It is also recorded that in Qianlong tenth year (1745), the Emperor ordered Zhu Cai to carve two Imperial seals for him utilising yellow jade. One seal is carved with the characters Qianlong chenhan, the other weijing weiyi. The impressions of these two seals are recorded in Qianlong’s Baosou(compendium of seal impressions), and the execution of the characters Qianlong is remarkably close to the reign mark on the present vase (fig. 3). incised mark on the current lot.

Among nephrite jades of ink-black, spinach-green, celadon, yellow and white tones, it is the yellow jades that were considered as the rarest. There are very few examples of Qianlong-marked jade hanging you, and the present vase is the only known example made of yellow jade. Compare for example to two celadon jade you, both carved with Qianlong fanggu reign marks, one illustrated in Views of Antiquity in the Qing Imperial Palace, Macao Museum of Art, 2005, p. 86, fig. 56, the other illustrated in Compendium of Collections in the Palace Museum – Jade – 10, Beijing, 2011, pl. 56. The Palace Museum also has two unmarked white jade you, ibid., pls. 57 and 58.

From known examples, it appears that Qianlong fanggu reign marks are often applied to celadon jades, as an attempt to imitate archaic bronzes. The current vase, modelled after the Zhou dynasty bronze he you and carved out of superb gan huang yellow jade, is clearly not meant to be a faithful replica of an archaic object, but a novel work of art made by the esteemed carver Zhu Cai according to the specific wishes of the Qianlong Emperor. This may explain why the present work is carved with a Qianlongnianzhi reign mark, rather than a Qianlong fanggu mark.

Commentaires sur An important and extremely rare imperial yellow jade hanging vase and cover, heting you, Qianlong incised mark and of the period