A rare and important imperial blue and white 'dragon' dish, Qianlong six-character seal mark and of the period (1736-1795)

A rare and important imperial blue and white 'dragon' dish, Qianlong six-character seal mark and of the period (1736-1795) 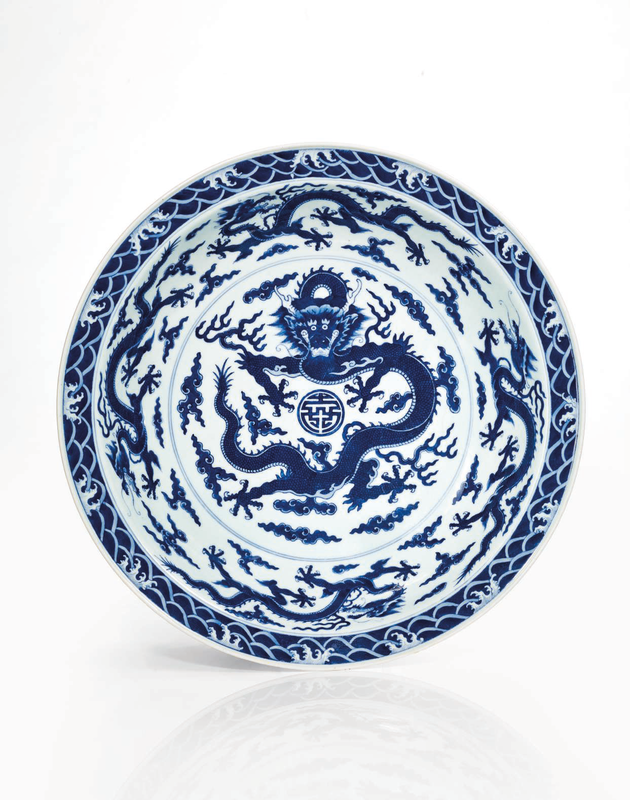 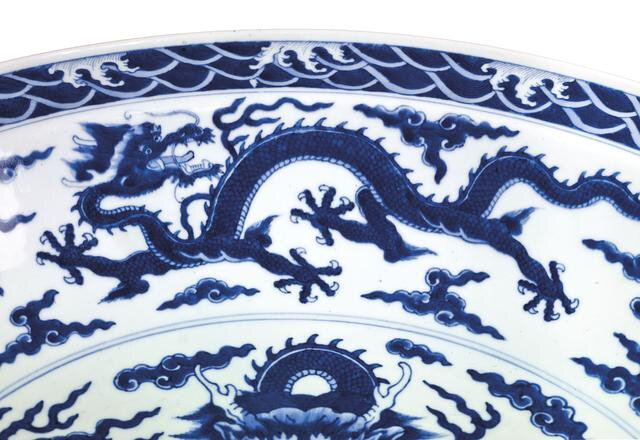 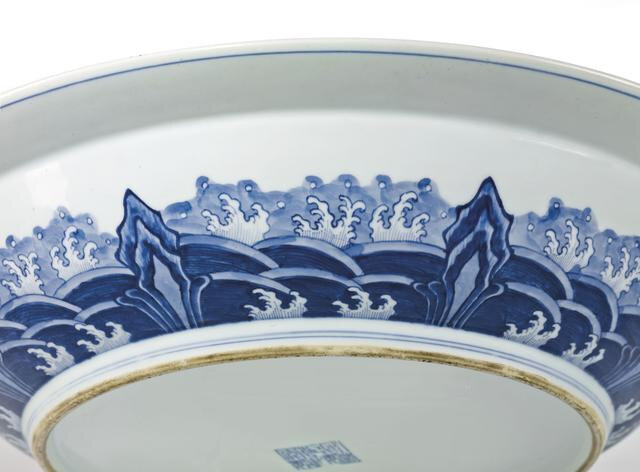 Provenance: Acquired by Gustave Loup (1876-1961) in China in the early 20th century, thence by descent in the family. Gustave Loup (1876-1961) was born in China in Tianjin and was the eldest of four boys. Their father, Pierre Loup, arrived in China in the early 1860s at the age of 19 sent by the watch company Vaucher Frères. Over a period of more than 40 years he was involved in business between Switzerland and China. After 1881 he ran the L. Vrard & Cie in Shanghai and Tianjin with two of his brothers. In 1899 he died leaving the business to his wife and sons. His elder son, Gustave progressively left the family business to beginning dealing in Chinese antiquities in Switzerland. His brother Albert became an architect who worked a lot in Tianjin where some buildings still exist today and the younger brother continued to take care of the family business. Gustave was extremely knowledgeable and had a very good eye, he had an extensive knowledge of Chinese culture, language and art. From 1920 he had an antique shop called La Chine antique in Geneva and continuously travelled between the two countries. When Alfred Baur visited China in 1924, Gustave Loup was his guide. He was also his advisor and many pieces in the Baur collection come from Gustave Loup, for example exceptional Qianlong snuff-bottles and hardstone carvings. After his death the collection of Gustave Loup was sold at auction and dispersed. A couple of pieces stayed in the family including our Qianlong dish and bronze figure of Manjushri. The Baur Foundation in Geneva paid tribute to Gustave Loup and his prominent role in the discovery of Chinese art in Switzerland with an exhibition entitled “A Chinese Adventure. A Swiss family in pursuit of success in the Celestial Empire” in 2017.

Note: Few designs encapsulate the power and importance of the reigning emperor more vividly than that seen on this magnificent Qianlong dish. In the centre of the dish is a commanding long dragon with prominent horns and five-clawed feet, which is depicted rearing up with its head facing forward and its body coiled around a circular version of the shou (longevity) character. The dragon is amongst clouds, which on the one hand emphasise the relationship with Heaven, but also symbolize the granting of wishes. Four more five-clawed, horned dragons decorate the cavetto of the dish. These are shown in profile striding around the central medallion. All four dragons are processing in the same direction, giving a harmonious balance to the design, but alternate dragons’ heads turn back to look over their shoulders at the dragon behind them – providing an effective visual link between them. These four cavetto dragons are also depicted amongst clouds.

Around the flattened rim of the dish is a well-painted band of waves of the type which developed from the turbulent waves on early 15th century blue and white porcelains. As the rolling waves between the white areas of spume are predominantly painted in deep blue, this band provides a good contrast to the design in the cavetto and interior medallion of the dish. In addition, the waves provide a reminder of the fact that the dragon is believed to rise from the waves at the spring equinox in order to bring rain to water the crops and ensure the prosperity of the empire. On the underside of the dish is a band of more complex waves punctuated, at eight equidistant points, by tall rocky outcrops. This is the same essential composition as is seen on the lower portion of imperial dragon robes. The waves suggest a river, while the rocks suggest mountains, and as such represent the kingdom. Specifically, the notion is of a united realm – shanghe yitong (may the kingdom be unified); jiangshan yitong (rivers and mountains under one unified rule); or tianxia guiyi (all under Heaven governed as one). Taken as a whole, the decoration on this dish highlights the importance and power of the emperor as Son of Heaven, his responsibility as an intermediary with Heaven to provide rain to water the crops and ensure a good harvest, and his role as the ruler of a unified nation at peace.

Large dishes of this type decorated in the finest cobalt by highly skilled ceramic artists are rare, and it seems likely that they were made for a grand imperial banquet, possibly following the completion of an important ritual conducted by the emperor. The design is also seen on rare Yongzheng examples such as that included in the Exhibition of Ming and Ch’ing Porcelain from the Collection of the T.Y. Chao Family Foundation, Hong Kong, 1978, no. 81. However, the more usual Yongzheng dragon design on large dishes shows a winged dragon in the central medallion amongst floral scrolls, and only two long dragons in the cavetto, also amongst floral scrolls. An example of this winged dragon Yongzheng type was sold by Christie’s New York on 22 March 2007, lot 336. A dish of similar size and decoration to the current to the current dish from the collection of the Royal Ontario Museum was included in the exhibition Silk Roads – China Ships, Toronto, 1983, p. 229, where it was dated to the early 18th century. With rounded sides rising to a slightly everted rim, the interior well painted in deep cobalt blue in Ming style with simulated 'heaping and piling' with a ferocious horned five-clawed dragon shown full face and with wings spread as it leaps amidst composite foliate meander in pursuit of a flaming pearl, with two dragons striding amidst further composite foliate meander in a band below a border of wind-tossed waves in the well and repeated as a frieze on the exterior. Estimate USD 150,000 - USD 200,000.

The vivacity of the central dragon depicted here is characteristic of the Qing dynasty portrayal of the Imperial dragon, which compared to the Ming dragon, is ever more boldly detailed and defined in its facial features and more elaborately represented in its general ferocity and mythological power. With rounded sides rising to an everted rim, the center of the interior painted with a five-clawed dragon leaping around a shou character amidst flames and clouds, below four further dragons striding amidst clouds in the well and a band of waves on the rim, the exterior with a frieze of cresting waves and rocks above the foot.

Note: A similar Qianlong-marked dish was sold in our Hong Kong rooms, 30 April 2000, lot 599. Another is illustrated by R. Krahl in Chinese Ceramics from the Gulexuan Collection, Lunen, 2003, p. 156, no. 123. Another of the same pattern and size, but with a Yongzheng mark, was included in the Exhibition of Ming and Ch'ing Porcelain from the Collection of the T. Y. Chao Family Foundation, Hong Kong Museum of Art, 1978, no. 81; and another dated to the early 18th century was illustrated by Vollmer, Keall and Nagai-Berthong in the exhibition catalogue, Silk Roads-China Ships, Royal Ontario Museum of Art, Toronto, 1983, p. 229.

The current dish was acquired in Asia in the early 20th century and has passed to the current owners by descent. The dish can be seen hung in pride of place on the wall of the family home in a photograph taken in the 1910s (fig.1). Commentaires sur A rare and important imperial blue and white 'dragon' dish, Qianlong six-character seal mark and of the period (1736-1795)