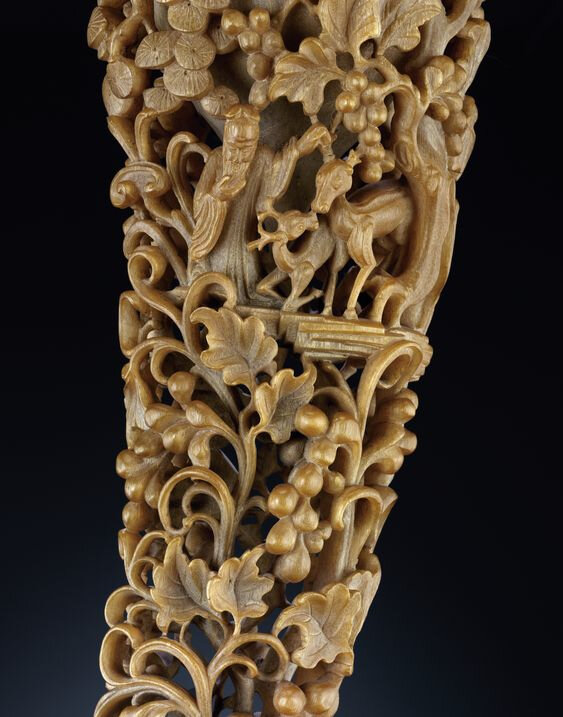 Each boldly carved utilising the natural curve of the horn, the first to depict an immortal standing beside two deer amidst an elaborate network of grapes, pine, magnolia, fruiting peaches and lingzhi fungus, all growing on branches, below deeply carved ruyi-shaped clouds around the mouth rim, the interior carved as lotus petals centred by a floral bud; the interior of the other cup is undecorated, the exterior similarly carved with three figures standing beneath three birds perched on fruiting branches of finger citrus, further detailed with flowering peony, crab apple, and fruiting peach branches, the horns of honey-brown tone, wood stands (2).

Provenance: His Excellency, Jacobo Bendahan, Minister and Privy Counsellor to His Majesty King Hassan II (1929-1999) of the Royal Kingdom of Morocco
Note: An example of these extravagently carved full-tip cups in the Durham University Oriental Museum Collection is illustrated by J. Chapman, The Art of the Rhinoceros Horn Carving in China, London, 1999, p. 72, no. 38 (72.5 cm. long). It is noted that these very large rhinoceros horn cups of this type were almost certainly made in Canton during the late 19th century, and commissioned by European traders, cf. op. cit., p. 73. The inspiration of these elaborate carvings was probably influenced by those of the late Ming period, such as the reticulated example carved from tip to rim and into the interior, from the Palace Museum Collection, illustrated Bamboo, Wood, Ivory and Rhinoceros Horn Carvings, The Complete Collection of Treasures of the Palace Museum, Commercial Press, 2001, pp. 146-147, no. 131 (37.4 cm. long).

There are several auspicious imageries conveyed by the carvings. The strongest overall imagery is the wish for long life as portrayed by Shoulou, the Star God of Longevity. This is further enhanced by pine trees, peaches and lingzhi fungus. The first of these, as an ever-green, has a long association with longevity. The second bears reference to the legendary peaches that were grown in the Daoist Paradise in the garden of Xiwangmu, Queen Mother of the West, and according to mythology, these peaches, once eaten, would bestow the power of immortality. The last is a sacred fungus that grows with a head resembling a wish-granting wand, ruyi, which provides the rebus "as you wish". A further point of note is the clouds carved encircling the mouth rims. These are deliberately carved into shapes that resemble heads of the lingzhi fungi.

Further auspicious imageries are provided such as the pair of deer standing beside Shoulao; the deer is a pun for 'emolument' or wealth. The white magnolia and peony flowers are popularly adopted in Chinese art. The latter for their association with wealth and the former, known as Yulanor literally 'White Jade', has connections to a poem by the famous Tang poet, Du Fu (712-770) in his 'Song of the Eight Drunken Immortals' in which Yulan was used to describe a talented young man. In addition, reading the floral combination rendered on this pair of horns with the peony, magnolia and crab apple flowers, they form the rebus Yutang Fugui, 'May your noble house be blessed with wealth and and honour'.
Christie's. Important Chinese Ceramics and Works of Art, 1 June 2011, Convention Hall
Posté par : Alain Truong à 16:38 - Chine, Objets de lettrés / Treasures of the Chinese Scholar - Commentaires [0] - Permalien [#]
Tags : 19th century , Qing dynasty, reticulated full-tip rhinoceros horn carving