A fine and very rare blue and white 'mythical beast' bowl, Wanli six-character mark within double-circles and of the period

A fine and very rare blue and white 'mythical beast' bowl, Wanli six-character mark within double-circles and of the period 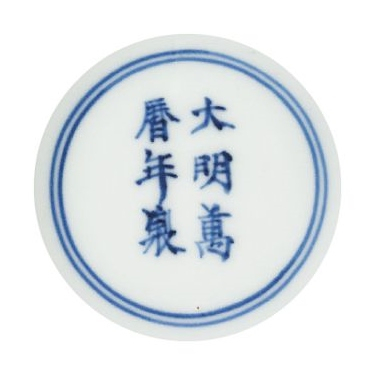 Painted with a fanciful scene of five-clawed dragons and mythical beasts in a tree-strewn landscape including a qilin as well as lion-headed, horse-headed, deer-headed, elephant-headed creatures and a conch, between a band of fruiting sprigs at the rim and precious emblems surrounding the base, the interior painted with a central medallion containing a full-face dragon in pursuit of a 'flaming pearl', Japanese wood box.

Note: The creatures depicted on the present bowl appear to be a stylised interpretation of a design known as the 'Sea Creatures' predominantly found on ceramics of the Xuande and Chenghua periods. A Chenghua blue and white dish from the Qing Court collection with a similar combination of creatures including a winged elephant, is in the collection of the Palace Museum, Beijing illustrated in Blue and White Porcelain with Underglaze Red (II), The Complete Collection of Treasures of the Palace Museum, Commercial Press, Hong Kong, 2000, p. 11, no. 9. In this publication the nine sea creatures are named as: dragon, horse, lion, turtle, elephant, deer, goat, conch and qilin. However, a wider range of different creatures also appear as part of this group, including fox, sea mollusc, antelope, dog, flying fish, flying shrimp, and other completely unidentifiable creatures.

No other Wanli-marked blue and white bowls of this rare pattern appear to have been published although elements can be found on other published examples of bowls decorated with mythical scenes from the Wanli period. Compare the fruiting sprig border beneath the rim as well as the interior 'dragon' roundel with an example decorated with a scene of LI Ji slaying a snake included in the University of Hong Kong exhibition The Fame of Flame, Imperial Wares of the Jiajing and Wanli Periods, Hong Kong, 2009, Catalogue no. 80. A related Wanli-marked jar with a similar scene of more conventional animals and creatures was sold at Christie's New York, 22 March 2007, lot 311.

Commentaires sur A fine and very rare blue and white 'mythical beast' bowl, Wanli six-character mark within double-circles and of the period