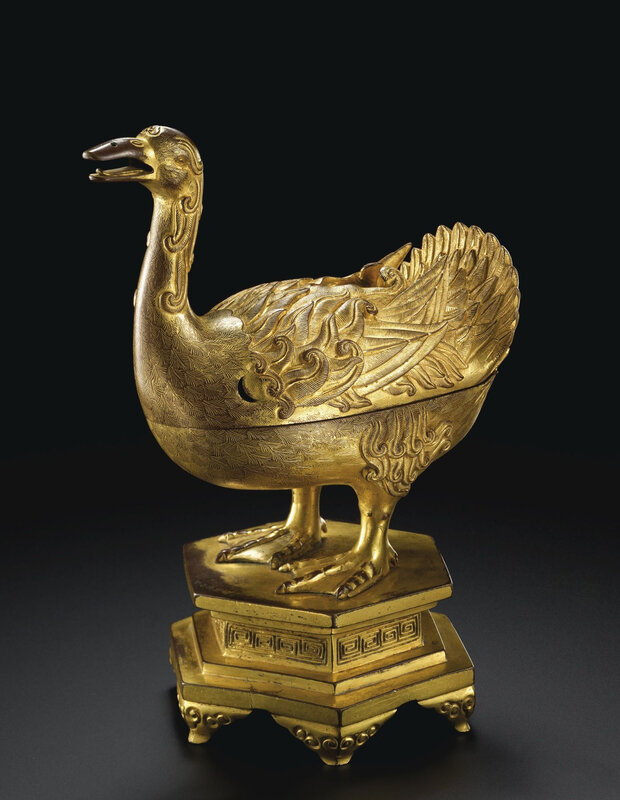 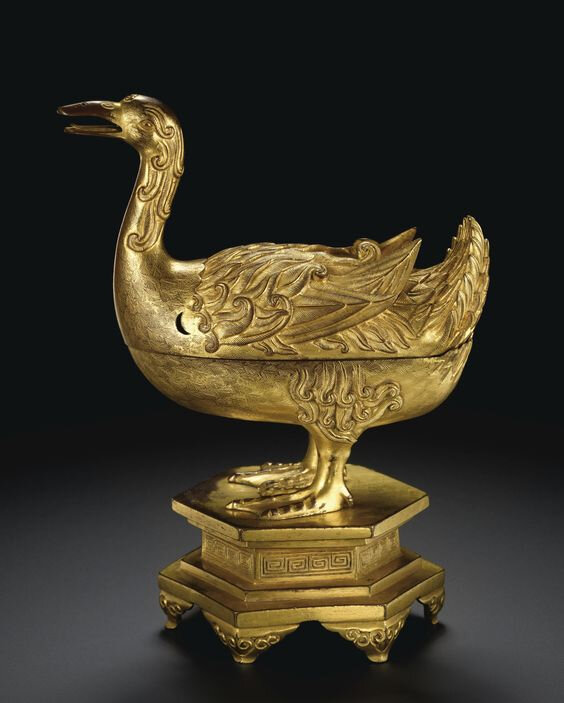 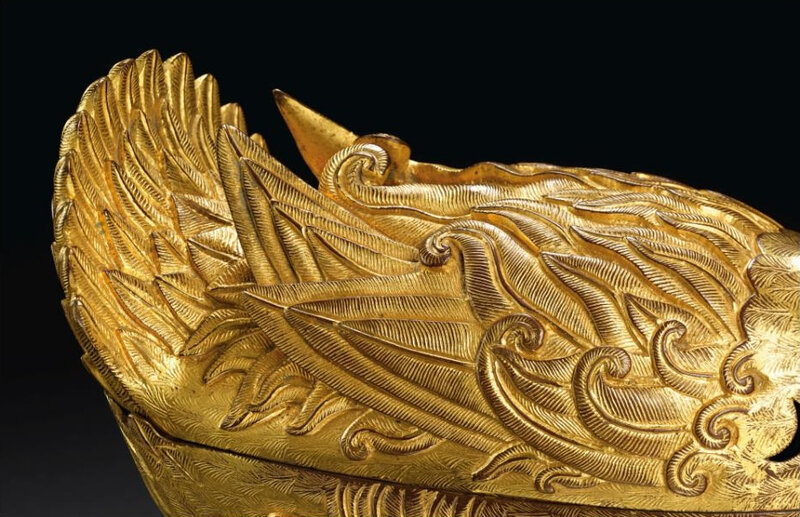 the incense burner and cover extremely well cast in the round in the form of a standing duck, its head slightly raised, with an open beak as if calling out and small beady eyes framed by long sinuous feathers trailing down its gracefully curved slender neck, the voluminous body with two crescent-form apertures to the sides, covered with finely detailed overlapping plumes conveying a sense of softness, the wings tightly tucked on either side, adorned with layers of triangular and curling feathers, pointing to an array of feathers fanning out from its tail, all supported on two sturdy webbed feet, standing on a hexagonal waisted stand inscribed horizontally on top of the base with a six-character Xuande mark, resting on six triangular feet on the corners.

This outstanding ‘duck’ incense burner is richly gilt all over its naturalistically cast body, with its head supported on an elegantly curved neck, partially opened bill, and the webbed feet firmly planted on a hexagonal pedestal—a truly noble bearing. The pedestal is intricately inscribed with a Xuande reign mark (1426-1435). The incense burner is exquisitely cast in the form of a waterfowl. The forehead has an ‘S’-shaped cloud design, and although there is no conspicuous crest, the animal appears to be a type of duck. The breast and underbelly have thin, soft feathers and thick, fluffy down. On the head, feet, wings, and tail, the plumage, be it straight or curly, is clearly layered. The body of the incense burner is divided into two pieces, top and bottom, with the lower portion cast with a rim that fits into the upper portion. The interior is hollow. To promote circulation in the interior, there are two crescent-shaped vent holes in front of the wings. When incense is burned, the smoke ascends through the neck, and the gilt-bronze duck emits fragrant fumes through its bill.

During the Ming dynasty (1368-1644), incense burners in the form of ducks were quite popular. For example, in 1406 Zhu Youdun, in Yuan gong ci yibai shou [One Hundred Lyric Poems of the Yuan Court], wrote, “The gold duck burns the remaining midnight fragrance. Only then do the ladies of the imperial family try on the Yue-weave skirts.” The Ming scholar official Jin Shan (alias Youzi, 1368-1431) wrote a series of ten poems titled Yuanxi ci guandeng [Viewing Lanterns on the Lantern Festival], in which he extolled the emperor’s bountifulness at a banquet held during the Lantern Festival at the beginning of the Ming dynasty. In one of these poems he wrote, “auspicious portents of lovely smoke rise forth from the golden duck censers”, recorded in Jin wen jing ji [A Collection of the Best of Jin’s Writing], vol. 4, in Qianding siku quanshu[The Complete Library in the Four Branches of Literature]. Jin Shan became a jinshi (presented scholar) in 1400. During the Yongle period (1403-1424), he was promoted to Grand Secretary of the Hall of Literary Profundity, and is recorded as having accompanied the emperor on expeditions. During the reign of the Xuande Emperor (r. 1425-1435), he helped compile and serve as the manager of the veritable records of the reigns of the Yongle and Hongxi Emperors. He passed away in 1431. According to this poem, already in the early fifteenth century there are records of a gilt-bronze duck incense burner like the present piece being used at court banquets.

In general, gilt-bronze religious figures of the Xuande court bear a reign mark Da Ming Xuande Nianshi ('Bestowed in the Xuande reign of the great Ming dynasty') in regular script, read from left to right. Though this manner of reading is contrary to Han tradition, it conforms to the practice of Tibetan reading and writing. However, the current duck incense burner is not a religious object, which undoubtedly explains why the reign mark did not follow the traditional Tibetan way of writing. Rather, the incised reign mark accords with the Chinese way of writing, from right to left. This inscription resembles the horizontal Xuande reign marks that are found on the outer rims of large, thick Ming dynasty imperial porcelain bowls with blue and white designs of branches, flowers, and fruit (for example, a large bowl in the collection of the National Palace Museum, Taipei illustrated in Mingdai Xuande guanyao jinghua tezhan tulu/Catalogue of the Special Exhibition of Selected Hsüan-te Imperial Porcelains of the Ming Dynasty, National Palace Musem, Taipei, 1998, cat. no. 47, or the bowl sold in these rooms, 5th October 2011, lot 13).

Published sources only reveal a small number of comparable extant bronze censers similar in form to the Speelman duck incense burner. Moreover, none of these other bronze incense burners bears a reign mark. A gilt-bronze duck incense burner designated as Ming dynasty was sold in France on 19th December 2007, lot 126, illustrated in Cabinet Portier, 100 ans, 1909–2009, Paris, 2010, p. 189, no. 782. Similarly depicted with its standing pose, detailed long and short, curved and straight feathering, incense smoke emitting from the bill, and crescent-shaped vent holes on both sides of the breast, it bears a striking resemblance to the Speelman piece, however differing in an overall lower quality casting and gilding, the protruding curved feathers, the less refined chest feathers, and the lack of a pedestal.

Though lacking a reign mark, a Ming bronze incense burner, similar in form and size to the present censer, was sold at Bonhams New York, 16th September 2013, lot 8103. In comparison with the present lot, the head of Bonhams' piece leans forward somewhat. The body, also cast with crescent-shaped vent holes, lacks closely laid feathers, and is not gilded. The legs are folded, and the duck is depicted seated on a lotus-flower pedestal. Another gilt bronze censer comparable to the present piece, also without a reign mark, was sold by Christie’s New York, 29th March 2006, lot 320. This piece, described as goose-form, was designated as Song to Ming dynasty. Its shape and size are nearly the same as those of the Bonhams piece, but without a pedestal, while the bill is somewhat elevated

The present lot is also closely related to a bronze duck incense burner from the Tokugawa Art Museum Collection. Cast with draft apertures amongst the feathers, and depicted standing on a square pedestal held by, it is illustrated in The Shogun Age Exhibition: From the Tokugawa Art Museum, Japan, Tokyo, 1983, p. 107, no. 75 (fig. 1). This Speelman duck incense burner differs only in minor respects from the three pieces mentioned above. According to the author of this published description, the Tokugawa piece was produced early in the Ming dynasty, in the fourteenth or fifteenth century. In comparing the craftsmanship of the pieces mentioned above, it is clear that the Tokugawa Art Museum incense burner appears to belong to a somewhat later age, and artisans presumably made efforts to improve the design of the censer. For instance, in comparison with the Christie’s goose, the head is tilted higher, so that when incense is burned, the duck emits smoke in a more animated fashion. Down the back of the duck’s head, the feathers form crests, but on the body, there is no fine feathering. The border between the breast and underbelly, and the base of the wing, is decorated with a fine wavy pattern that is somewhat labored and not as natural as on the other examples. Another comparable piece is a sancai Chenghua (1465-87) reign-marked duck incense burner excavated in Jingdezhen, illustrated in Kōtei no jiki: Shin hakken no Keitokuchin kanyō/Imperial Porcelain: Recent Discoveries of Jingdezhen Ware, Osaka, 1995, cat. no. 116 (fig. 2). The bill is raised to as high a degree as in the Tokugawa Art Museum piece, and here too, the duck stands on a square pedestal. However, this porcelain incense burner has six air-intake vents skilfully concealed in the rim. Although no actual piece has been handed down or excavated, it is known from the poetry of later dynasties that they too, had duck censers. For example, the Tang poet Li Shangyin (813–858), in his poem Culou [Rapid Water Clock], wrote, “The fragrance for the resting-duck censer was changed to an evening incense.” Hence we know that these censers existed in Tang dynasty. This practice seems to have continued through to the Song dynasty, as demonstrated by a bronze duck censer closely resembling the present one excavated from the tomb of Zhang Xuanyi of the Southern Song (1127-1279), in Jishui District, Jiangxi. From an excavated edict, we know that Zhang Xuanyi was first re-buried in 1237 and was later entombed in the present location in 1254. As in the other examples, this duck incense burner has a long neck and an open bill to emit the incense smoke. See Chen Dingrong, ‘Jiangxi Jishui jinian Song mu chutu wenwu [A Chronology of Artifacts Excavated from a Song Tomb in Jishui County, Jiangxi]’, Wenwu, 1987, no. 2, fig, 2 and pl. 6:5.

Compare also similar mallard duck incense burners produced in cloisonné enamel: one from the Stoclet collection, designated as sixteenth century, is illustrated in Chinese Works of Art from the Stoclet Collection, Eskenazi, London, 2003, cat. no. 18; another of the same period in the collection of the National Palace Museum, Taipei, is illustrated in Ming Qing falangqi zhan tulu/Enamel Ware in the Ming and Ching, National Palace Museum, Taipei, 1999, cat. no. 7. Dating to the early sixteenth century based on the enamels, the head of the mallard in the National Palace Museum piece is noticeably tilted upward at an angle close to that of the Tokugawa incense burner.

Drawing from the long tradition of duck-form incense burners, with feathers meticulously rendered and exuberant thick gilding, the Speelman duck incense burner was clearly of earlier production than other comparable pieces offered at auction or the Tokugawa example. Closely fitting the description from the ancient poem of a golden duck which emitted auspicious fumes of lovely smoke at an imperial banquet, this rare Xuande-marked incense burner encapsulates the dynamic quality of gilt-bronze production in the early Ming dynasty.