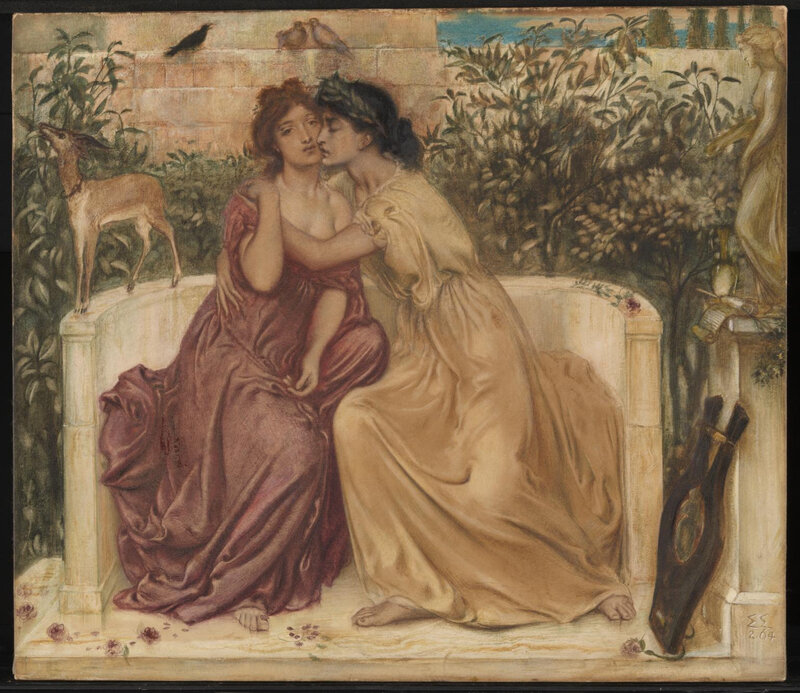 NEWCASTLE UPON TYNE.- The Laing Art Gallery’s new exhibition, The Enchanted Garden, explores the garden as a ‘stage’ for the extraordinary, the magical, the atmospheric and the nostalgic and casts new light on the work of the our best-loved artists.

From the Pre-Raphaelites and French Impressionists to the Bloomsbury Group and 20th century abstraction, artists have taken inspiration directly from the gardens around them - whether small or large, manicured or wild. These secret, enveloping and sometimes mysterious spaces are seen through windows, in panoramas and often repeated in different lights and seasons - a less constrained space to set human dramas.

The Enchanted Garden opens with paintings, works on paper and books by artists and writers celebrating, or reminiscing over, the traditional cottage garden. Artists such as Helen Allingham, have long-created a sense of nostalgia and enchantment through scenes of idyllic cottage gardens, at a time when the world was changing at a great pace. Beatrix Potter’s meticulous and playful capturing of animal adventures in the vegetable garden can be seen alongside Cicely Mary Barker’s magical and yet educational Flower Fairies watercolours.

A sense of the magical and enclosing nature of the garden can be seen in the works by Edward Burne-Jones, Albert Moore and the Laing’s Thomas Armstrong painting, Woman with Lilies (1876). Charles Robinson’s images for Frances Hodgson Burnett’s novel The Secret Garden and Walter Crane’s illustrations for Oscar Wilde’s The Selfish Giant wind an enchanted thread around the reader. Simeon Solomon’s Sappho and Erinna in a Garden at Myteline (1864), on loan from Tate is a particular highlight.

The dramatic and painterly possibilities of light and shade in the garden often drove artists to create extraordinary and delicate works. Dod Procter’s The Orchard (1934), on loan from Tate Britain, sits alongside the Laing’s In the Spring Time, by Harold Knight (1908-9), as dappled sunshine emanates from the canvases and draws us into idyllic summer days. The spectacular Water-Lilies, Setting Sun (c.1907) by Claude Monet (right), on loan from the National Gallery, London brings together light, shade and nature in an iconic example of Impressionist use of gardens in paintings. 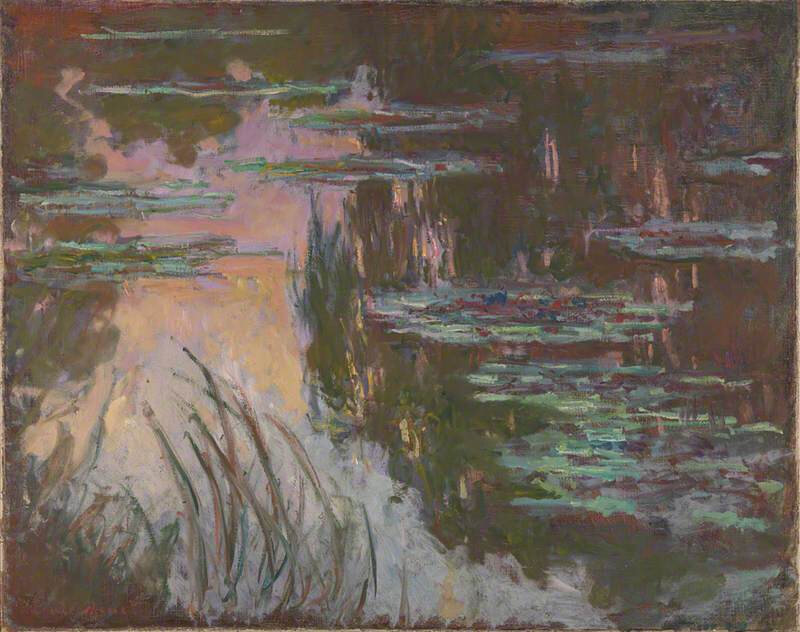 During the late 19th and early 20th century, groups of British artists and designers frequently congregated around particular villages and houses, where gardens played an important role. William Morris’ gardens at Red House and then Kelmscott Manor supplied endless inspiration. Morris’ daughter Mary, who drew, photographed and embroidered scenes and flowers from the gardens at Kelmscott. Philip Webb, Dante Gabriel Rossetti and Edward Burne-Jones were all inspired by and worked in these spaces.

Similarly, the gardens of Charleston farmhouse, near Firle in East Sussex, nearby Monk’s House and those of Sissinghurst Castle were timelessly captured by members of the Bloomsbury Set. Vanessa Bell, Virginia Woolf and Vita Sackville-West all had husbands who gardened with dedication and creativity and provided them with spaces in which to be inspired, to work and in Virginia’s case to recover from serious bouts of depression. This section of the exhibition includes paintings by Duncan Grant, Vanessa Bell and Roger Fry, the original design for Trellis wallpaper by William Morris and Philip Webb, watercolours by May Morris, first editions of Vita’s poem The Garden and Virginia’s novel Kew Gardens.

The Ordinary made Extraordinary features works in which mystical and religious scenes take place in ordinary gardens and landscapes. A trio of works by Rossetti (on loan from Tate and the Fitzwilliam) introduce the notion of early Renaissance paintings, pre-Raphael. Paintings by the Pre-Raphaelite Brotherhood (formed 1848) informed the work of mid-20th century artists Stanley Spencer, William Roberts and Eric Gill. A highlight of the exhibition surely is the Laing’s The Lovers or The Dustman by Spencer, shown alongside The Betrayal (1936) also by Spencer and on loan from National Museums Northern Ireland. William Roberts’ The Garden of Eden (1926) lent by the Ingram Collection brings a dark edge to the biblical scenes. 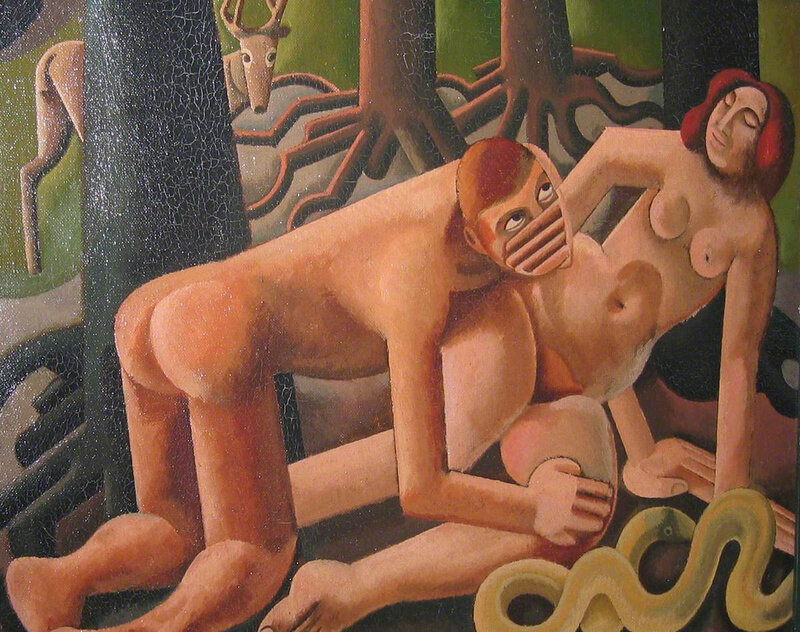 The Laing has also brought works by other giants of 20th century art to Newcastle. In the Abstracting the Garden section, visitors can see pieces by Francis Bacon, Patrick Heron, Frances Hodgkins and Newcastle University Fine Art lecturer Victor Pasmore. Their abstract paintings serve to capture the very essence of a garden: from the dark and dangerous feeling of Bacon’s Figures in a Garden (c.1936) to the dreamlike, misty The Hanging Gardens of Hammersmith, No.2 (1944-7) by Pasmore (both on loan from Tate). Recent work by Mat Collishaw exploring both ordinary plants made exquisite and flowering plants made flesh completes the exhibition. 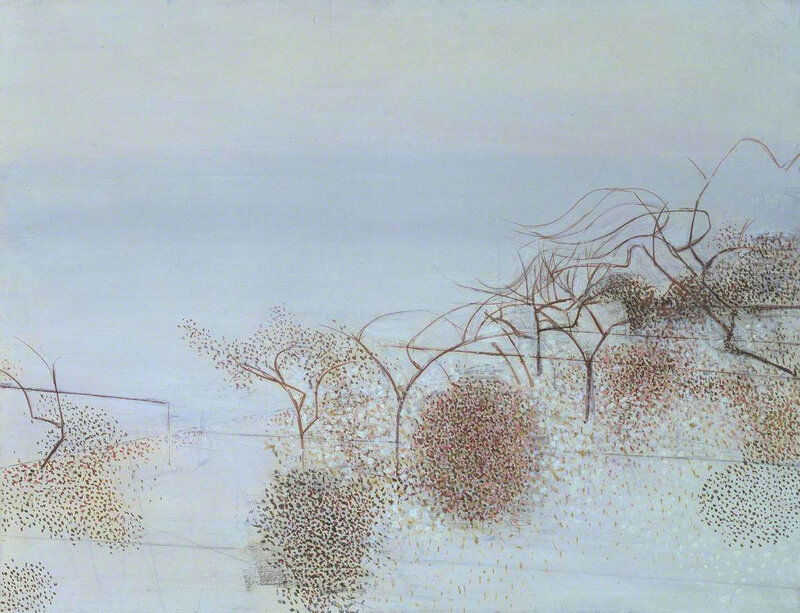 Exhibition curator Amy Barker says: “Exploring the magical qualities of gardens in art has been a wonderful experience as a curator. Visiting gardens that inspire, such as at Charleston and Sissinghurst gives a full sense of the impact these spaces have on our hearts and souls. The human instinct to grow and nurture combined with our endless creativity and the waywardness of nature combine to create masterpieces outside and within.”

Julie Milne, Chief Curator of the Laing, Hatton and Shipley Art Galleries, says: “This exhibition showcases some of the finest paintings in UK collections representing the theme of the garden. It includes major loans like Monet’s ‘Water – Lilies, Setting Sun’ from the National Gallery, Francis Bacon’s lesser - known early work of ‘The Garden’ from Tate and a spectacular large scale watercolour on cloth by Burne - Jones called ‘Love’ . With support from funders including the John Ellerman Foundation, the creativity and knowledge of the curatorial team has resulted in a truly wonderful exhibition."