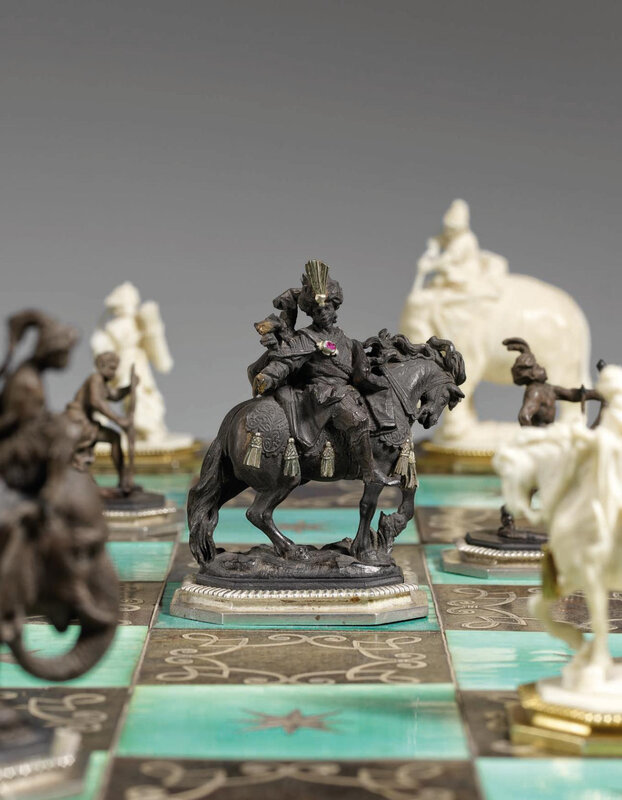 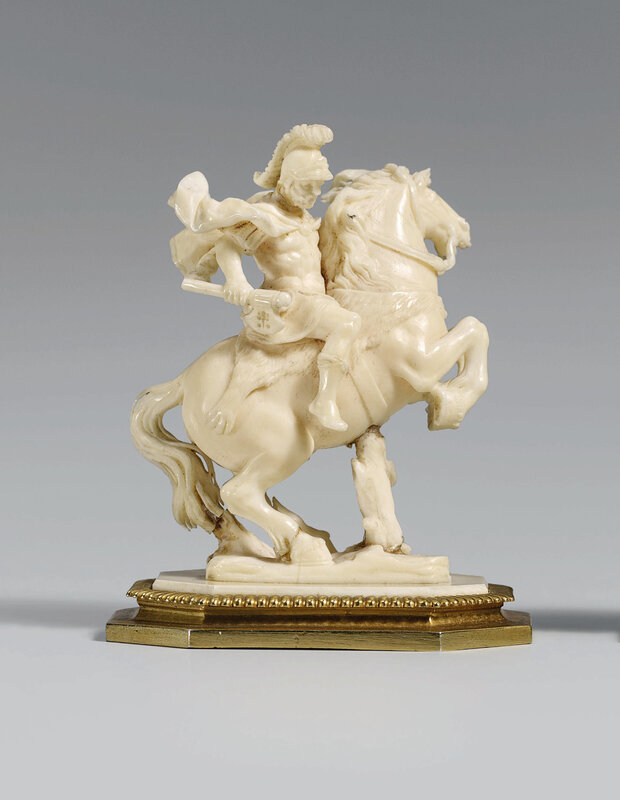 The top of the chess board with alternating squares of stained ivory and tortoiseshell inlaid with silver stars and scrolls; the sides veneered with tortoiseshell and silver foil trim and fitted with two drawers to house the chess pieces; the chess pieces made of ivory on silver-gilt bases and from ebonised walnut (?) on ebony and silver bases; the pieces in the form of standing warriors, figures on elephants and figures on horseback.

Provenance: Probably Christian I von Münch (1690-1757) ennobled in 1731, then by direct descent to
Oscar von Münch (d.1920), whose property on his death passed to the present owner's family.

Note: Chess is one of the most ancient strategic board games, and is thought to have had its origins in India sometime before the 7th century. It came to western Europe through different channels including the Arab conquest of Spain, and the expression ‘check mate’ in English is thought, ultimately, to be a corruption of ‘sheikh mat’, Arabic for ‘the sheikh/king is dead’.

Because the game came to be associated with the intellectual, leisured classes an industry developed for the production of chess sets that incorporated the most luxurious materials and exquisite craftsmanship, often being made of inlaid amber, hardstone or ivory and tortoiseshell, as with the present example. This trend developed particularly from the 16th century onward, with the original abstract pieces replaced by figurative examples in the most elaborate sets.

The pieces of this set are each stamped with the maker’s mark of Paul Solanier (1635-1724), who was active in Augsburg in the late 17th and early 18th centuries. He is best known for his work producing domestic silver such as beakers and salvers, with no previous record of him having produced a chess set of this type. His work is recorded in a number of private collections as well as museums in Budapest, Frankfurt and the Metropolitan Museum of Art in New York.

Despite their small size, the figures themselves are carved with an astonishing vigour and high level of characterisation. The two sides almost certainly represent the ‘Romans’, carved in ivory, and the ‘Carthaginians' carved in ebonised wood. This makes reference to the Punic wars fought between the rising Roman Empire and the more established empire of the Carthaginians of North Africa (264-146BC). These wars, some of the most extensive ever seen until then, are perhaps best known today for the story of Hannibal's crossing of the Alps using elephants in 218BC. The king figure of the Cathaginians – sitting proudly on his horse and wearing a turban decorated with a silver plume – is among the most powerful images of either side.

Considering the quality of the carving of these chess pieces, it is perhaps unsurprising that one of the ivory bishops holds in his hand a piece of paper that is inscribed with what appears to be the remains of a signature. Executed on a minute scale, one can still make out 'He...' and on a second line 'M...', however it has not proven possible thus far to identify the sculptor. They can be compared in general terms to a number of chess pieces but are perhaps closest stylistically to a set in the Bayerischen Nationalmuseums, Munich, which was catalogued in 1926 as 'German, late 16th century' (illustrated in Berliner, op. cit., pp. 133-134, 282-283). With their energetic, twisting poses, and elongated hexagonal bases they share many similarities with the present set. In addition, the costumes of the opposing sides, with the ivory pieces dressed in 'Roman' armour and the stained wood pieces in exotic dress that includes feathered headresses, are closely comparable. The Munich set has more recently been catalogued as 'German, second half 17th century' (see Munich and Nuremberg, op. cit., pp. 28-29).

The chess set was almost certainly the property of Christian I von Münch (1690-1757), a leading Augsburg banker who was ennobled in 1731. Von Munch was in contact with the court of Charles Albert, Duke of Bavaria, who is known to have pawned works of art from his collection in order to raise funds for his military campaigns. Although documents have not surfaced which can verify this early provenance, the chess set was certainly in the possession of his direct descendants, and at the death of Oscar von Münch in 1920, it passed to the family of the present owners. The set offered here shares the same provenance as the 'Altenstetter Service' sold in these Rooms in 2005 (1 December, lot 514) and now in a private collection.