AMSTERDAM.- Fantastic sea creatures, monstrous beasts, whimsical body shapes and fluid contours that seem to drip like syrup from a spoon: all are manifestations of the ornament style known as kwab, ‘auricular’ or ‘lobate’ - with the English denominations referring to the organic forms of the ear. In the 17th century their almost molten form was to be found on luxury items such as ewers, dishes, furniture, wall-hangings and frames in the most stylish interiors of the elite.

The kwab style is the most sensational and important Dutch contribution to the development of decorative art in Europe. Its originators – the Dutch silversmiths Paulus and Adam van Vianen and Johannes Lutma – enjoyed unprecedented fame in their day. Their work was also an inspiration for artists such as Rembrandt and the cabinetmaker Herman Doomer.

In this exhibition, a spectacular design by theatre and lighting designer Keso Dekker, renowned for his ballet sets by Hans van Manen, brings together 130 auricular masterpieces in the Rijksmuseum. A selection of the finest silverware, alongside paintings by Rembrandt and Metsu, prints and drawings, tables, cabinets, gilt-leather wall hangings and brass church decorations, will tell the story of this spectacular Dutch Design of the Golden Age. Art of the spirit
The Dutch Golden Age is most famous for its Old Master paintings capturing everyday life: portraits, interiors and landscapes painted ‘from life’. Far less well-known is the Dutch decorative art of the same period that took the opposite approach. Silversmithing gave birth to a new and fanciful style ‘of the spirit’; artists working in this genre conceived organic, surrealist forms derived from nature. These stylistic innovations marked a revolutionary departure from traditional forms of silversmithing, with artists exploring the medium’s potential in unprecedented ways. It wasn’t long before this new decorative style was being incorporated in artworks and everyday objects.

Trendsetters
The melting forms reminiscent of earlobes and cartilage first appeared in the work of the Utrecht-born silversmith Paulus van Vianen (c. 1570-1613), a craftsman at the court of Emperor Rudolf II in Prague. His decorative style was also applied in designs by his brother Adam and Johannes Lutma, who belonged to the guilds of silversmiths in Utrecht and Amsterdam respectively. Their work inspired artists in other disciplines – such as Lutma’s friend Rembrandt, and the cabinetmaker Herman Doomer – who reinterpreted the kwab style for their own work. Demand for kwab designs in elite interiors spread to England, France and Germany, and the Dutch artists working in this style were immensely popular. Adam van Vianen’s ewer
The Rijksmuseum is home to the world’s largest collection of artworks in kwab style. The exhibition’s centrepiece is a memorial silver-gilt ewer from the museum’s collection, made by Adam van Vianen to commemorate his brother Paulus. Its form emerges from fluid, half-human half-animal figures. In the 17th century this showpiece was the Netherlands’ most famous artwork, and it was frequently copied and depicted in paintings. In addition to silverware, this exhibition includes objects from the Rijksmuseum collection such as the Augsburg Cabinet and Baby Linen Cabinet. 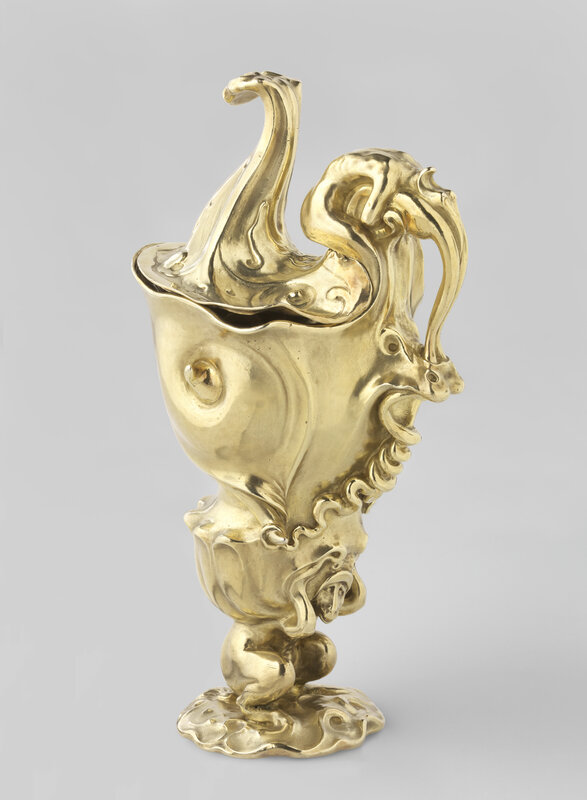 Spectacular loans
This retrospective exhibition features auricular masterpieces from international museums and private collections. Among them are the Standing Cup with Cover by Johannes Lutma from the Walters Art Museum in Baltimore and The Dolphin Basin by Christiaen van Vianen from the Victoria and Albert Museum in London. Another highlight is the gilt leather wall hanging from the rooms of the Duke and Duchess at Castle Skokloster in Sweden. Two doors from Johannes Lutma’s famous choir screen in Amsterdam’s Nieuwe Kerk will also be on display. Special attention will be given to the kwab ornamentation on frames or in paintings. To this end the exhibition will include Gabriel Metsu’s A Man and a Woman Seated by a Virginal, loaned from the National Gallery in London, in which the artist includes a frame in kwab style in his depiction of the scene. On loan from the Gemäldegalerie in Kassel is Rembrandt’s The Holy Family, in which the artist created his own trompe l’oeil frame in kwab style. The exhibition will even include two scale-model miniature frames, from the dolls’ house of Petronella de la Court, on loan from the Centraal Museum in Utrecht.