VIENNA.- Marking the transition from historicism to Jugendstil, Gustav Klimt’s oeuvre shaped the beginning of modern art in Vienna. 100 years after his death, the Leopold Museum pays tribute to the figurehead of the period of “Vienna around 1900” with a comprehensive exhibition divided into eight thematic emphases and illustrating all the periods of the artist’s oeuvre by means of some 35 paintings, 90 drawings, 30 photographs and approx. 150 archival documents.

Along with exhibits from the Leopold Museum and the Leopold Private Collection, the exhibition also features numerous works given to the museum by a Klimt descendant as a new permanent loan, as well as four paintings and six drawings from a private collection, which were also entrusted to the museum as permanent loans. The presentation further includes select loans from Austrian and international collections, and for the first time provides comprehensive insights into the collection of the Klimt Foundation, which acts as scientific research and cooperation partner to this exhibition.

The presentation Gustav Klimt. Artist of the Century traces an arc from Klimt’s beginnings at the height of the Gründerzeit era dominated by historicism, via his artistic paradigm shift and the evolution of his own, individual style from the mid-1890s, when he created his first drafts for the Faculty Paintings for the ceremonial hall of Vienna University, which would cause a scandal. The overview continues with Gustav Klimt as a leading figure of the Vienna Secession, whose members broke with esthetical conventions and paved the way for Jugendstil, and goes on to shine the spotlight on his activities as a sought-after portraitist of the wealthy Viennese bourgeoisie as well as on his highly erotic, symbolistically charged female depictions. Also on display is a selection of his landscapes created during his regular summer sojourns in the Salzkammergut region, which served to further Klimt’s renown. Along with exceptional works from international collections and the museum’s own holdings, the exhibition features a new permanent loan at the museum, Klimt’s only Viennese landscape Schönbrunn Landscape (1916).

DEATH AND LIFE AND THE BRIDE ENTER INTO A DIALOGUE FOR THE FIRST TIME
The exhibition sees two monumental allegorical works by Klimt enter into a dialogue for the first time: Death and Life (1910/11, reworked in 1915/16) has been part of the Leopold Museum’s collection compiled by Rudolf Leopold for 40 years, while The Bride (1917/18) was brought into the collection of the Klimt Foundation in 2013. Since the Faculty Paintings, Gustav Klimt had addressed the cycle of life and its individual phases. During the last years of his oeuvre, and shaped by personal experiences, Klimt started to rework the first version of Death and Life in 1915 and transferred depictions of individual stages of life as solitary figures to his works The Virgin (1913) and The Bride. The paintings, which are both shown in the exhibition, were prepared by Klimt with numerous drawings. The sketchbook for his last allegory has survived, and affords valuable insights into the process of the work’s composition and creation.

The first presentation of drawings along with the extant sketchbook and the painting The Bride from the collection of the Klimt Foundation allows visitors to delve directly into the fantasies and visions of this exceptional artist. The painting further affords scope for new interpretations and, through its Expressionist accents, links Gustav Klimt as a pioneer of modernism in Austria with his successors Oskar Kokoschka and Egon Schiele. --Sandra Tretter, curator of the exhibition. 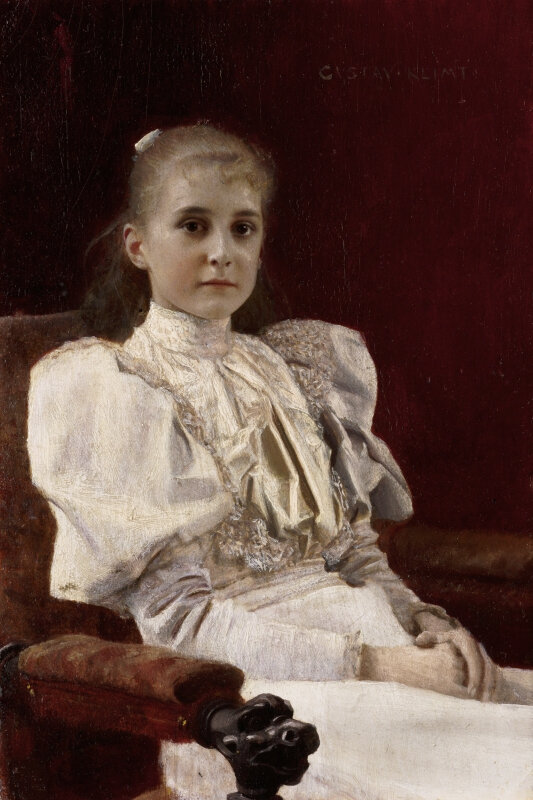 BEGINNINGS AT THE HEIGHT OF THE GRÜNDERZEIT ERA – THE “KÜNSTLERCOMPAGNIE”
Two decades before Gustav Klimt emerged as a battlesome campaigner against the Gründerzeit style and art of historicism, he himself had been part of this cultural era informed by classical traditions. In 1876, at the age of 14, he was admitted to the School of Arts and Crafts, which was part of the Imperial Royal Austrian Museum of Art and Industry. Members of the wealthy liberal bourgeoisie sought to cement their status through prestigious buildings along the Vienna Ringstrasse, and Klimt was predestined to execute the naturalistic decorations of these new palaces owing to his academic education. In 1883 Gustav and his brother Ernst Klimt as well as Franz Matsch formed the studio collective “Künstler compagnie”, soon profiting – especially after the death of the “prince of painters” Hans Makart – from the busy construction activities and acquiring numerous commissions. Among their commissions were the ceiling paintings for the two staircases of the Burgtheater (1886–1888) as well as the spandrel and intercolumnar paintings for the Kunsthistorisches Museum (1887–1891).

Soon afterwards, however, Gustav Klimt would turn away from the reactionary ideals and norms of historicism both formally and in terms of content – a new approach to reality had entered into his oeuvre. KLIMT AS THE LEADING FIGURE OF THE VIENNA SECESSION
The emerging crisis of the Danube Monarchy went hand in hand with an art political caesura which reached its provisional climax in the founding of the Vienna Secession. In the mid1890s, a young generation of aspirational artists formed a group within the Künstlerhaus which stood up against conservativism and advocated an opening of exhibition spaces to international and modern movements. In 1897 the rebelling artists, including Koloman Moser, Carl Moll and Alfred Roller, proclaimed their secession from the Künstlerhaus and, under the presidency of Klimt, founded the Union of Austrian Artists Vienna Secession with the aim of educating society through future-oriented artistic concepts and of permeating life with art.

Already in 1898 the Secession received its own exhibition space with the erection of the Secession building designed by Joseph Maria Olbrich. The motto inscribed above the entrance “To every age its art, to art its freedom” stands to this day for the group’s radically liberal approach. The Secessionists’ mouthpiece was the magazine Ver Sacrum (“holy spring”) also founded in 1898, which was designed by Koloman Moser, Josef Hoffmann and others, and to which Gustav Klimt contributed numerous illustrations. 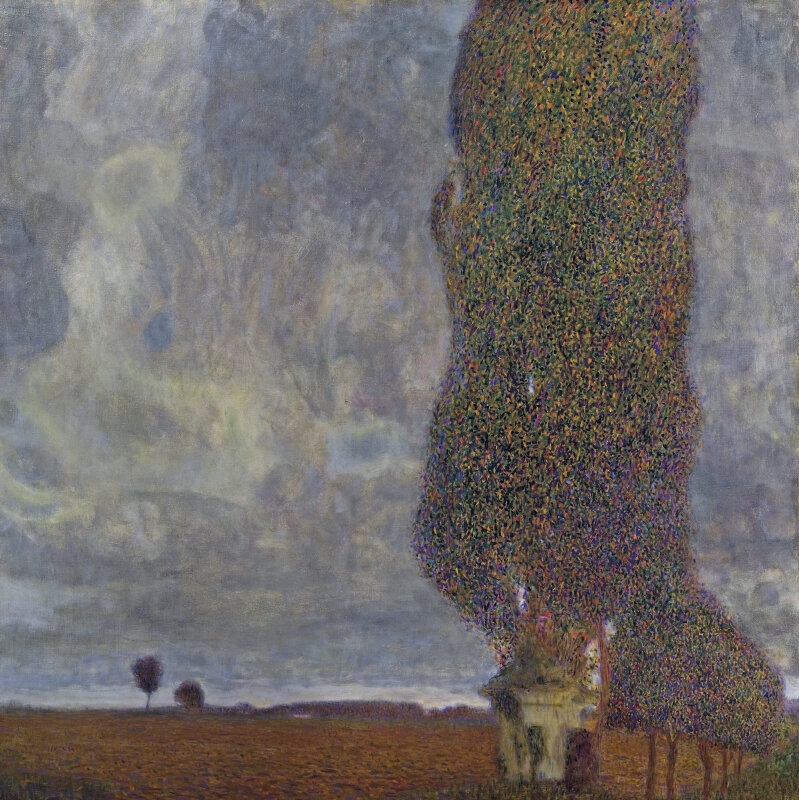 CULTURE STRUGGLE SURROUNDING THE SCANDALOUS FACULTY PAINTINGS
Gustav Klimt’s commission to create Faculty Paintings for Vienna University provoked a dispute that would last several years. In 1894 the artist was asked by the ministry of education to conceive three ceiling paintings for the auditorium of the university, as well as ten spandrel paintings. Klimt presented the first of the three monumental works, Philosophy, in an unfinished version at the 7th Secession Exhibition in 1900. His rendering of Medicine was exhibited in 1901 at the 10th Secession Exhibition, while his last Faculty Painting, Jurisprudence, was shown at the 18th Secession Exhibition in 1903.

The works mostly received scathing criticism from the professors and art critics, as Klimt dispensed with any glorification of the sciences and instead made man’s irrational and instinctual nature the focus of his depictions. After some ten years of fierce attacks, the artist resigned from the commission in 1905 and reimbursed the state his fee. SPLIT FROM THE SECESSION AND THE VIENNA KUNSTSCHAU IN 1908
The different programmatic aims of the Secession members provoked internal conflicts and in 1905 led to a rift between the group of artists known as “stylists”, which Klimt belonged to, and those known as “realists”. The reason for the split, however, was not so much their differences of an esthetical and stylistic nature, but rather the opening of the “Klimt Group” towards the Wiener Werkstätte, the School of Arts and Crafts, and not least on account of their cooperations with art dealers (Galerie Miethke).

Operating independently of the Secession from 1905, the Klimt Group organized one of the most important exhibitions of the time, the 1908 Kunstschau. On the grounds of the future Konzerthaus, Josef Hoffmann erected a temporary exhibition complex where some 900 exhibits were presented. In his opening speech as the Kunstschau’s president, Gustav Klimt emphasized the importance of applied arts, stressing that there was no difference between “high” visual and “low” applied arts.

Klimt’s landscapes make up around one quarter of his painterly oeuvre. They were predominantly created in nature, or at times from photographs and picture postcards in his Vienna studio. The artist wanted to depict a natural environment independent of man that reflects a tranquil atmosphere – his interest in a symbolic expression and in aspects of timelessness and transience were central to these works. --Hans-Peter Wipplinger, curator of the exhibition

Emilie Flöge is regarded to this day as the inspiring “muse” by the side of the world-renowned artist – and their relationship has been the subject of much speculation. The independent woman accompanied the most prominent artist in the Monarchy at the time as a steadfast companion through personal and creative highs and lows. One of the most influential fashion designers in Vienna, she ran the salon Schwestern Flöge from 1904 together with her sisters Helene and Pauline. Inspired by new movements and tendencies, she pursued her own artistic path alongside Klimt. Both of them were eminent representatives and trendsetters especially for the Wiener Werkstätte founded in 1903 and the workshop’s concept of the Gesamtkunstwerk, or universal work of art. KLIMT AS A PAINTER OF WOMEN – FEMALE PORTRAITS AND EROTIC DRAWINGS
Gustav Klimt is considered the painter of women par excellence, and he devoted a large share of his oeuvre to female depictions. His range of female types is multifaceted and includes the erotic-fetishized woman, the demonized femme fatale, the allegorically- mythically charged female creature of nature, and finally the idealized lady of society. This last type earned him a reputation as a painter of distinguished female portraits in fin-de-siècle Vienna. Like the paintings themselves, the drawings and studies accompanying these female portraits merely outline the individuality and personality of the sitters. 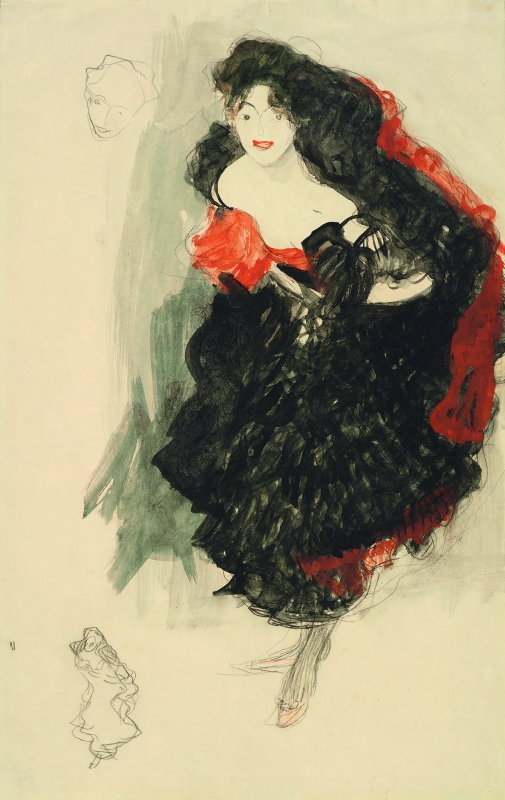 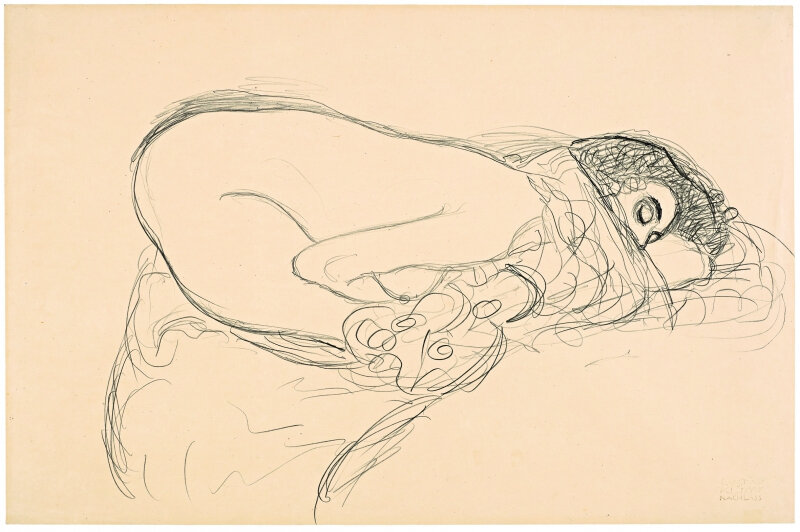 KLIMT’S DEATH 100 YEARS AGO
The year 1918 marked the end World War I, bringing with it the fall of the Monarchy and its Imperial metropolis Vienna. While this marked a turning point on a political level, the deaths of the leading protagonists of Viennese Modernism, who all passed away that year, represented a caesura in the visual arts – not only Gustav Klimt but also Egon Schiele, Koloman Moser and the architect Otto Wagner all died 100 years ago.

Berta Zuckerkandl wrote in the Viennese newspaper Wiener Zeitung about the painful loss of Klimt: One of the greatest has passed away. A plain hero. A silent, tenacious fighter. An unconquerable. A victor. […] So unique, so eminent, so irreplaceable is this master of heroic color, of the regal creative line, of visions arising from harmonies that even in these times accustomed to death, Klimt’s passing pierces our souls as something incomprehensible, as a violation of a marvelous gift bestowed on mankind.
In the summer, a catalogue about the life and works of Gustav Klimt will be published to accompany the exhibition, with essays by Daniela Gregori, Rainer Metzger, Ivan Ristić, Verena Traeger, Sandra Tretter, Peter Weinhäupl and Hans-Peter Wipplinger.