LONDON.- Following the strong results of last season’s sale, which soared beyond pre-sale expectations and totalled £3.9 million, Sotheby’s forthcoming sale of Ancient Sculpture and Works of Art will return to London with a vast selection of works spanning ancient Egypt and the Near East to Classical Greece and Rome.

Sotheby’s Worldwide Head of Ancient Sculpture and Works of Art, Florent Heintz, says: “Not only does this year’s sale offer an incredible selection of objects spanning 2,600 years, but, through dogged and comprehensive research, we have been able to trace several of the objects back to important collections, and to identify works of art once thought lost, including a Roman wallpainting fragment which once belonged to Gothic novelist and arbiter of taste Horace Walpole and a Roman portrait of a man which once belonged to Wilton House - imagine our delight in discovering that the portrait I had been staring at in the same book for 15 years and the marble head I had on my desk were one and the same.” 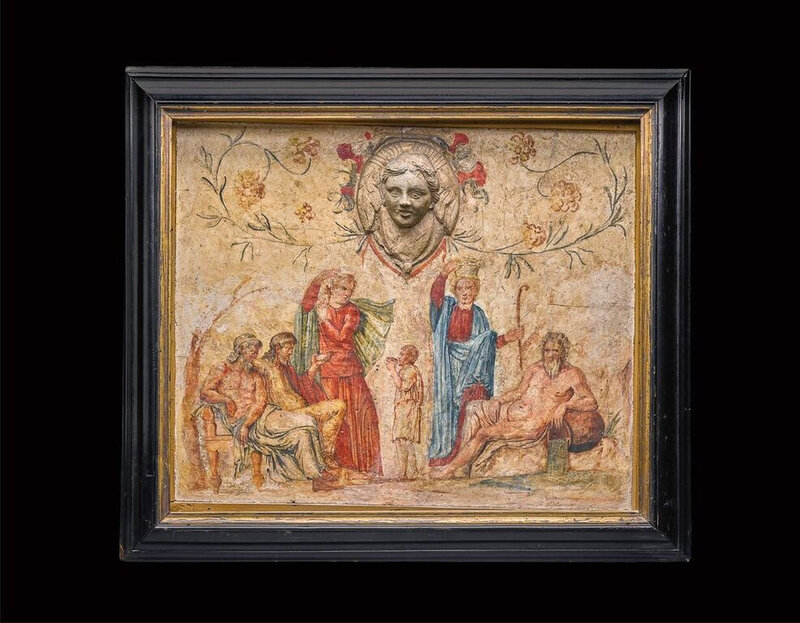 In the 17th and 18th centuries, collecting antiquities became synonymous with good taste. It was fashionable for young aristocrats to embark upon a ‘Grand Tour’ across the continent from which they would endeavour to return with an understanding of art and architecture, and a selection of classical souvenirs.

This Roman wall-painting fragment is one such “souvenir”. Dating to circa 2nd century A.D., the lower half is decorated with 18th century Italian additions showing men and women at a festival, surrounding a river god reclining at right.

Through extensive research and collaboration with Strawberry Hill House curator Silvia Davoli, Florent Heintz has identified this plaque as a lost work from the collection of art historian, antiquarian and author of Gothic novel The Castle of Otranto, Horace Walpole.

The panel was positioned above the door in the ‘little library’ of Walpole’s flower garden cottage, where it remained for nearly 100 years before it was sold in 1842.

The research of Florent and Silvia has helped to identify further treasures which were once part of Walpole’s collection, several of which will be on loan to an exhibition opening this October: ‘Lost Treasures of Strawberry Hill’. 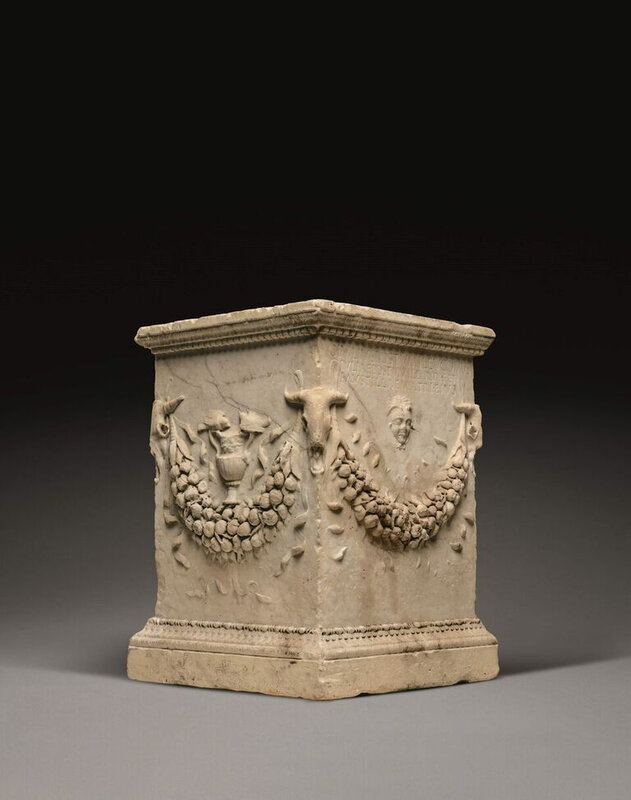 First recorded in the collection of Agostino Andrea Chigi (1466-1520), one of the wealthiest Tuscan bankers and patrons of the arts in the Renaissance, this altar has borne witness to an impassioned love affair involving one of history’s most famous artistic figures.

The altar was exhibited in the garden of Chigi’s noble villa in Rome – a masterpiece in architectural design and decoration later known as the Villa Farnesina - which he commissioned Raphael to decorate with frescoes celebrating love and pleasure. While Raphael was working at the villa he became utterly infatuated with his lover Margherita Luti, and was unable to give the desired attention to his work until she was installed in one of the rooms close by, allowing him to see her at a moment’s notice. The re-appearance of this lot at auction on July 3 comes 180 years after its first appearance at Sotheby’s, when it was offered as part of the collection of Giovanni d’Athanasi in 1837. Listed as lot 975, the 19th century catalogue entry read ‘a priest offering to the Deceased and his Wife seated, and underneath four lines of Hieroglyphics’.

Today, it is catalogued with an extensive translation of the inscription, which reveals its dedication to Egyptian deities including Osiris and Anubis. The stele invokes the protection of the deceased, a "Sailor of the [Fayum] lake Maya” and “His wife, mistress of the house Nub-emhenuti", and asks that they are provided with “bread and beer, meat and fowl, linen and clothing, incense and oil, cool water, wine, milk and everything good and clean” for their journey to the afterlife.

Born on the island of Lemnos, Greece, in 1798, d’Athanasi played a pivotal role in the archaeological discoveries in Egypt in the first half of the 19th century. The sale of his collection at Sotheby’s was one of the very first Egyptian Antiquities sales ever held in the western world.

Many of d’Athanasi’s Egyptian objects are now in the British Museum.

REMARKABLE EGYPTIAN SCRIBE NOT SEEN IN PUBLIC SINCE 1905 For more than 100 years this sculpture has been part of the furnishings and works of art adorning the celebrated Palais Stoclet in Brussels, designed by Joseph Hoffmann and decorated in part by Gustav Klimt. A surviving black-and-white photograph shows the sculpture in the Main Hall.

Research for the cataloguing of this work revealed that the scribe had an even earlier collection history, as it was sold at auction in Paris in 1905.

The most significant example of ancient Egyptian sculpture from the Middle Kingdom to appear at auction in recent memory, the sculpture is identified in an inscription on the front of the base as ‘the Scribe of the Temple of Nekht-Ankh’. The cloaked sitter gazes into eternity with his left hand on his chest, as he would once have sat in a temple while witnessing a sacred rite.

A ROMAN PORTRAIT OF A MAN TRACED TO COLLECTION OF WILTON HOUSE, WILTSHIRE 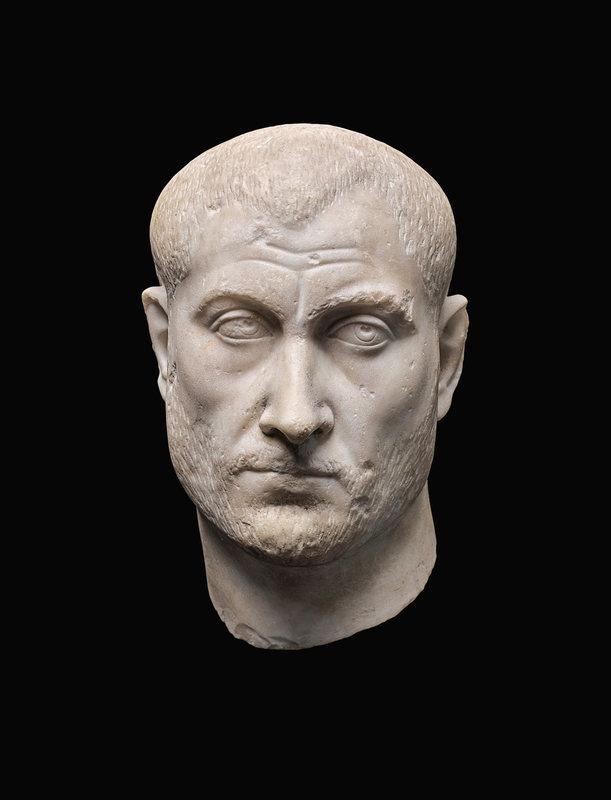 In researching this marble portrait of man, the exceptional provenance of the work was brought to light: a photograph, published in 1923, places it within the celebrated collection of Wilton House in Wiltshire.

It first entered the collection in the 17th century under Thomas Herbert, the 8th Earl of Pembroke, an enthusiastic antiquarian to whom "it was a matter of pride that no head that entered his collection could be allowed to remain anonymous" (J. Scott, The Pleasures of Antiquity: British Collectors of Greece and Rome, New Haven, 2003, p. 43).

The head was subsequently recorded as a portrait of a Roman Emperor, but it is more likely to be the likeness of a patrician man; under Imperial Roman rule, it became fashionable to commission private portraits resembling the Emperors and their consorts– perhaps the first ever ‘influencers’!