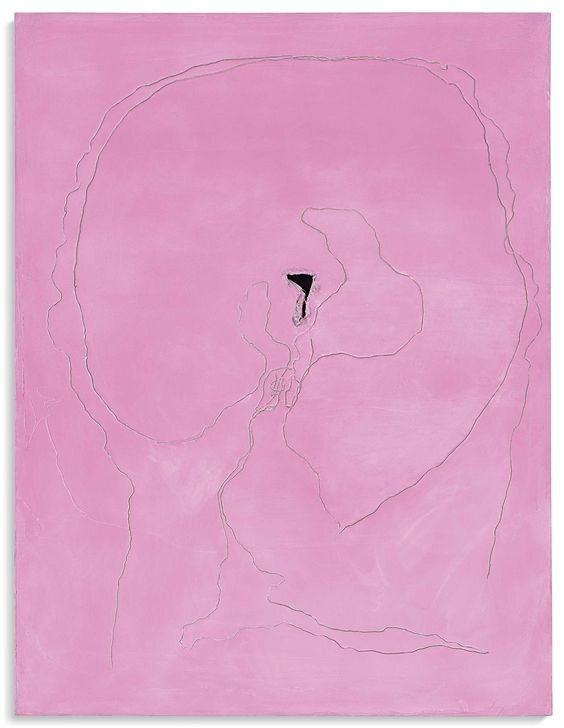 ‘Einstein’s discovery of the cosmos is the infinite dimension, without end. And here we have the foreground, middleground and background, what do I have to do to go further? I make a hole, infinity passes through it, light passes through it … everyone thought I wanted to destroy; but it is not true, I have constructed.’
– Lucio Fontana

With a single deep fissure gouged into its pink oil encrusted surface, Lucio Fontana’s Concetto Spaziale, 1962, stems from the artist’s celebrated body of Olii paintings. After a brief experimentation in 1957, the Olii (Oils) came to dominate Fontana’s practice in the early 1960s, and he remained dedicated to them until his death in 1968. Characterised by an impasto monochrome canvas with one or more holes roughly torn into the centre of the work, the brightly coloured Olii were counterparts to Fontana’s Minimalist Tagli paintings. Where the hallmark of the Tagli (Cuts) was crisp, almost surgical slashes into the surface of canvases devoid of any trace of the artist’s hand, the Olii expressed a more primal, even guttural sense of raw immediacy. Indeed, rendered in thick, sculptural lavishes of saccharine pink oil paint, the buco or ‘hole’ in the present work seems to erupt explosively, as viscous, fleshy paint spills over the edges. The antithesis of the serene and seductive Tagli, the wound-like hole in Concetto Spaziale dominates the composition, recalling Italian paintings of the anguished Christ upon the cross. Fontana has further incised markings into the pictorial surface: they circle and spiral around the gaping hole, imbuing the work with a feeling of pent-up and electric energy.

Working in the age of space travel, Fontana sought to develop a new visual language that broke cleanly with the past in order to capture both the exhilaration, and existential anxiety, that this new era proposed. ‘The man of today,’ he explained, ‘is too lost in a dimension that is immense for him, it is too oppressed by the triumphs of science, is too dismayed by the inventions that follow one after the other, to recognise himself in figurative painting. What is wanted is an absolutely new language’ (L. Fontana, quoted in A. White, Lucio Fontana: Between Utopia and Kitsch, Cambridge, Mass. and London, 2011, p. 260). By the time Concetto Spaziale was executed in 1962, science had reached new pinnacles. Mankind had escaped the confines of planet Earth and had sent first satellites, then human beings, into space. In April the previous year, Yuri Gagarin had soared above the Earth, the world’s first Cosmonaut, bolting through the void in orbit. This same orbit seems echoed in the scraped and wavering lines of Concetto Spaziale, which revolve shakily around the central void as if in emulation of the unsteady, unsettling trajectory of humanity into the great unknown. Whilst the Tagli contemplate the mysterious allure of space travel, the Olii express a more fearful, visceral apprehension through their tactile surfaces and striking, bold palettes in colours typically ranging from acid green, to, as in the present work, shocking pink. ‘The colour of the grounds of these canvases is a bit loud,’ Fontana proclaimed in a 1962 interview, ‘[indicating] the restlessness of contemporary Man. The subtle tracing, on the other hand, is the walk of Man in space, his dismay and fear of getting lost; the slash, finally, is a sudden cry of pain, the final gesture of anxiety that has already become unbearable’ (L. Fontana, quoted in P. Gottschaller, Lucio Fontana: The Artist’s Materials, Los Angeles, 2012, p, 90).

The soft, pink flesh tones take on a further symbolism in Concetto Spaziale, evoking not just open wounds and cosmic constellations, but the carnal imprint of female sexuality. As if abstractly re-envisaging Gustave Courbet’s ground-breaking L’Origine du monde, 1866, Fontana described the pink of the Olii in Milanese dialect as ‘la rosa di mutand di don’, or the pink of ladies’ underwear, heightening the sensual dimension that is underscored by the suggestive womanly physicality of the rift at the centre of the work (L. Fontana, quoted in P. Gottschaller, Lucio Fontana: The Artist’s Materials, Los Angeles, 2012, p. 94). In Fontana’s radical composition, the sensation provoked by his emblematic punctures becomes a multifaceted proposition: from Christ’s suffering to the Big Bang Theory to primal motherhood itself, it is rich in allusion to the origins of the world.