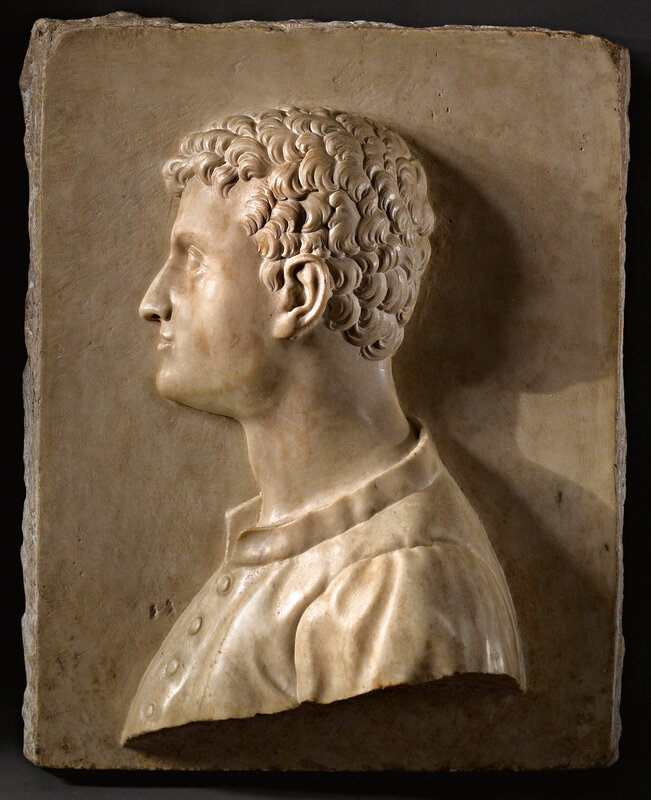 Note: This portrait of the young Cosimo I de 'Medici (1519-1574) was apparently executed when the future Grand Duke of Florence was 17 years old, just prior to his rise to power in 1537. While the combination of his simple clothing and the lack of a beard suggest his age, this portrait nonetheless captures the subject's authority and commanding presence. His distinguished, prominent chin, slightly pronounced lower lip and sloping nose are particularly evident in other early renderings of  Cosimo I in profile, among them a group of medals by Domenico di Polo (Langedijk, op. cit., pp. 496-498, nos. 27, 156-161), a black chalk drawing by Pontormo, 1537, in the Uffizi, Florence (Langedijk, op. cit., fig.  66) and a painting based on a design by Pontormo from the workshop of Vasari depicting Cosimo in civilian clothes (Langedijk, op.cit., figs. 27, 55).

Direct comparisons can also be made to the Bandinelli's other portraits of the Prince executed in the 1540s and 1550s, including his marble bust of a slightly older and armoured Cosimo in the Museo Nazionale del Bargello, Florence (c. 1540-1541)  (fig. 1) as well as a dynamic image of the Prince also in armour and with a turned head in the Metropolitan Museum of Art, New York circa 1539-40 (fig. 2). Bandinelli's profile self portrait reliefs in marble (in the Museo dell' Opera del Duomo, Florence and in the Louvre, Paris) also share attributes with the present relief in the rendering of the curls of hair and the large, blank eyes, as well as the curved truncation of the bust. 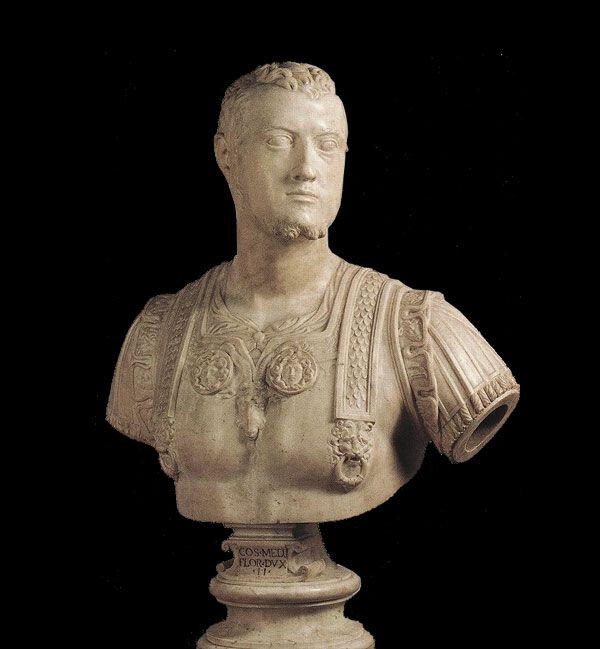 Baccio Bandinelli was a faithful servant to Cosimo throughout his career and essentially became his official court sculptor. He executed a large number of portraits of the Prince, including a full-length figure for the Palazzo della Signoria, two bronze portraits including, a bust in the Bargello and a half-figure in the Palazzo Pitti. In many of these images, particularly in the earlier portraits, Bandinelli idealized the features of his subject and resolved the compact masses of hair in the same manner.

When Duke Cosimo I had moved to the Palazzo Vecchio, Bandinelli was given the task of decorating the Udienza together with Giuliano di Baccio. The room was to house statues of Cosimo I and his ancestors within an architectural framework. The Udienza was finished by Vasari, Caccini and de Rossi. Beginning in 1547, Bandinelli was put in charge of the Opera del Duomo and sculpted, among other works, the Adam and Eve, now in the Bargello, for the high altar.

Bandinelli was a sculptor, painter and draughtsman whose father was a prominent goldsmith who was also supported by the Medici. Baccio was loyal to this powerful family, even during their exile from Florence, 1493-1513, which gained him constant commissions. He worked for the sculptor Giovanni Francesco Rustici some time before 1508, where he learned how to model in wax and clay. His first major sculptural commission was for a St. Peter in marble (1515-17) for the crossing of the Duomo. He produced sculpture and decorations for the ceremonial entry into the city for the new pope; this included a colossal terracotta figure of Hercules (destroyed) made for the Loggia dei Lanzi where it sat adjacent to Michelangelo's David. This sparked the rivalry between the two sculptors and the competition over who would carve the pendant to the David. Pope Leo X's return to Florence afforded Bandinelli a series of commissions of nude, muscular Classical gods and heroes, many of which are documented in his drawings. When Giulio de' Medici was elected pope Clement VII, Bandinelli gained more commissions including the decorations for the papal coronation in 1523. With the Sack of Rome in 1527 and the Seige of Florence, along with the expulsion of the Medici, Bandinelli left his native city. After producing a good number of sculptures, validating his name throughout Italy, he returned to Florence and carved the group of Hercules and Cacus, in the Piazza della Signoria, which established him as the official sculptor to the Medici Dukes, first Alessandro and then Cosimo I.