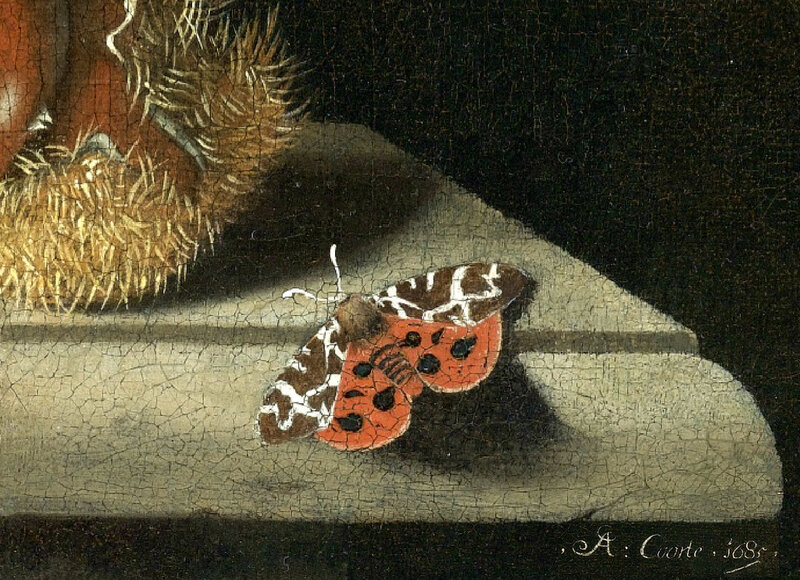 Note: Though recorded as autograph in Laurens J. Bol's important studies of Coorte (see 1952-3 and 1977 literature), the present picture was sold in 2006 as by an anonymous Dutch artist. Despite that confused attribution, it is clear that this work is a fine example from Coorte's early, and rare, output. Signed and dated 1685, it is one of only three known dated pictures from that year.1 It relates closley to a work from one year later, Still Life with Berries, Medlars and Grapes (Maida and George Abrams Collection, Boston), in which Coorte similarly employs a more complex arrangment of hanging fruit, set above a ledge with cherries. After 1688, Coorte's oeuvre consists of much more austere and simple arrangments, comprised of only one or possibly a few still-life elements.

Despite any differences with what is now recognized to be Coorte's "mature" style, the present work still employs the hallmark motifs so unique to Coorte's output. The picture is arranged in a beautifully simple composition comprised of a butterfly, chestnut, and hanging seasonal fruit, in this case more rarely seen cherries and apricots. A hard, bright and wonderfully elaborated illumination spreads an unrealistic, almost magical sheen over his carefully structured still lifes. The edges of the stone table stand out sharply, with a clear-cut joint and minor cracks or damage. The elegantly rendered chestnut and butterfuly are painted in meticulous detail, both set against a dark green background which is again consistent with Coorte's early work.