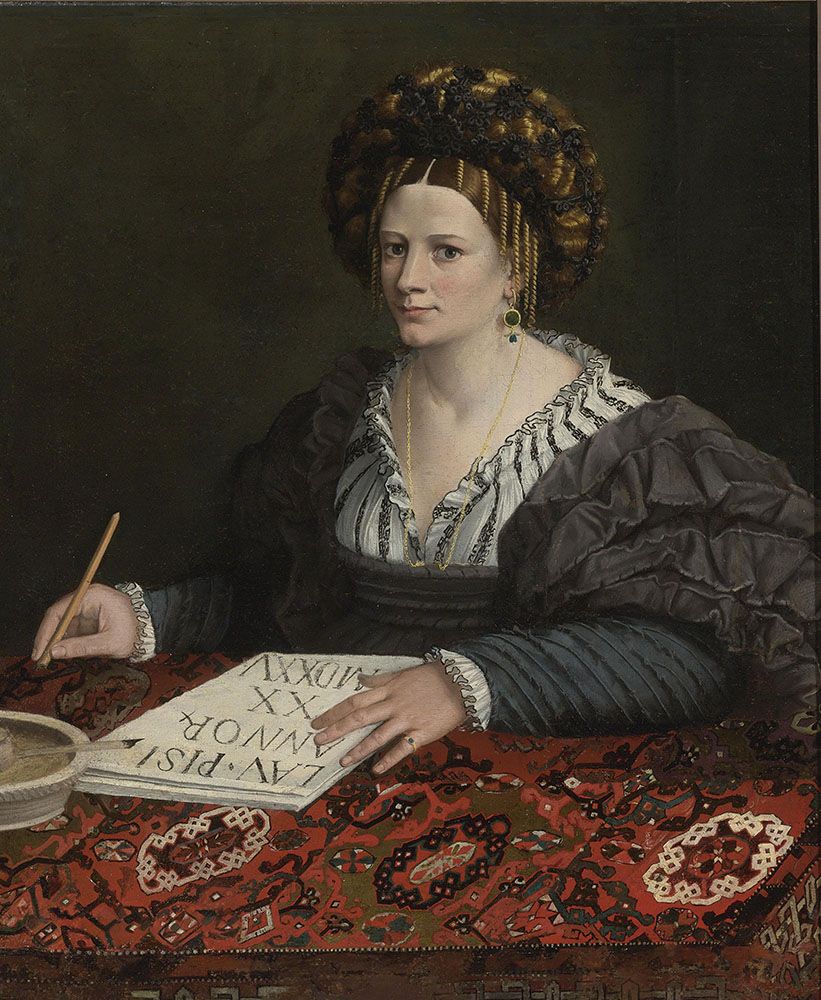 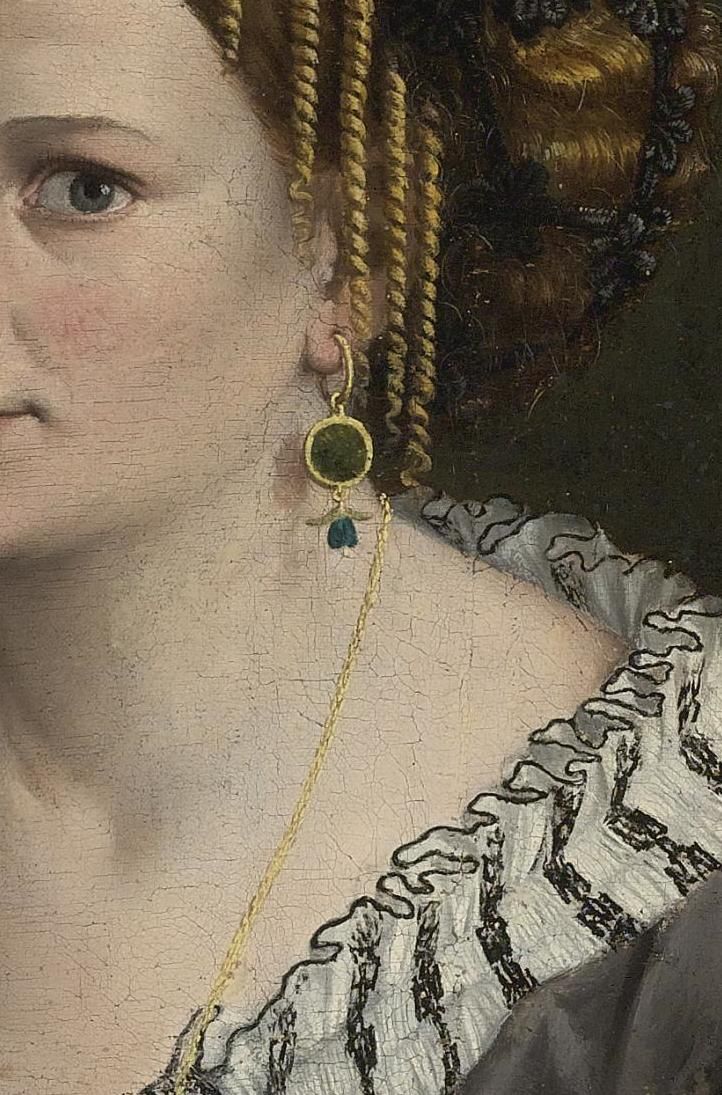 Note: The authorship of this striking and impressive portrait has long puzzled scholars of Italian art, as has the identity of the beautiful young woman who is depicted.  She appears to be a member of the large and powerful Pisani family, which had branches in Ferrara and Venice, among other Italian cities.  This woman was most likely a member of the Ferrarese branch and possibly a poet, given the way she is here depicted.  When Bernard Berenson first published the portrait in 1907, he gave it to Dosso Dossi, as did Henriette Mendelsohn in 1914; however, the attribution was always considered slightly problematic, as the face of the woman was inconsistent with other known portraits by Dosso.  In fact, Berenson himself later included the Portrait of Laura Pisani in both his Italian Pictures of the Renaissance, Venetian School and his study on Lorenzo Lotto, attributing it in full to Lotto in both publications.

Berenson's attribution to Lotto was based on his belief that the work was a pendant to another portrait thought to be by Lotto, the Portrait of Antonio Correr (formerly, Ricketts and Shannon Collection, London), also of 1525, which featured an almost identical sheet of paper with the inscription "ANT. COR. / ANNOR / XXVII / MDXXV."1  In spite of the similarities between the written inscriptions in these paintings, the attribution of the present work to Lotto does not seem tenable.  We know, for example, that Antonio Correr married a Venetian woman by the name of Elizabetta Priuli in 1521,2 four years before these portraits were executed.  That a gentleman of some stature in Venice should be depicted in a portrait with a woman who was not his wife would seem very strange indeed.  Additionally, the crispness of Laura's slightly planar face and the bold, geometric design of her carpet-covered table are at odds with the softness and dark palette of the Antonio Correrportrait.

The connection of the Portrait of Laura Pisani to the circle of artists working around Dosso Dossi and his brother Battista seems much more compelling.  A comparison between the present work and Dosso's Portrait of a Woman with an Ermine (Laura Dianti), in the Musée Condé, Chantilly confirms the association:  both women wear diaphanous white blouses with ruching and black trim around neck and cuffs under voluminous black gowns; both have a delicate gold chain around their necks and an elaborate jeweled headpiece, through which their dark hair is interwoven.  Such costume was typical of Ferrarese women during the 1520s and 30s, and these details firmly place the work within this milieu.

Gabriele Cappellini, called Calzolaretto emerges from the large number of artists working with and around Dosso Dossi as the likeliest author for the present work.  Very little is known about Calzolaretto, who is recorded in Dosso's workshop as late as 1540, when he received payments in February and June for gilding the frames for Dosso and Battista Dossi's Saint Michael Overcoming Satan and Saint George and the Dragon from their patron, Duke Ercole II of Ferrara.3  Only two paintings, both altarpieces, have been firmly given to Calzolaretto in the current literature:  Saint Francis of Assisi Receiving the Stigmata with Saints Peter, James the Greater and Louis, King of France, of circa 1515 (Pinacoteca Nazionale, Ferrara, inv. no. 101) and The Apparition of the Madonna and Child to Saints John the Baptist and John the Evangelist in the Presence of Ludovico Arivieri and his Wife, of 1522 (Archbishop's Residence, Ferrara).  Both works show similarities to the present portrait:  the face of Saint John the Evangelist from the Arivieri altarpiece and in particular, the faces of Saints James the Greater and Louis, King of France in the Pinacoteca panel are remarkably similar in construction and countenance to Laura Pisani.  The identification of the Portrait of Laura Pisani with the work of Calzolaretto is an important step in reconstructing his oeuvre and in distinguishing between the works of Dosso's followers in general.  As the first secular painting to be given to the artist, the Portrait of Laura Pisani is an important stepping stone along the path towards a better understanding of Calzolaretto, the extent of his participation in Dosso's workshop and the elaboration of his own unique artistic personality.

We are grateful to Keith Christiansen and Mauro Lucco for each independently suggesting the attribution to Calzolaretto on the basis of firsthand inspection and photographs respectively.

An alternate attribution to Sebastiano Filippi has been suggested by Alessandro Ballarin on the basis of photographs.