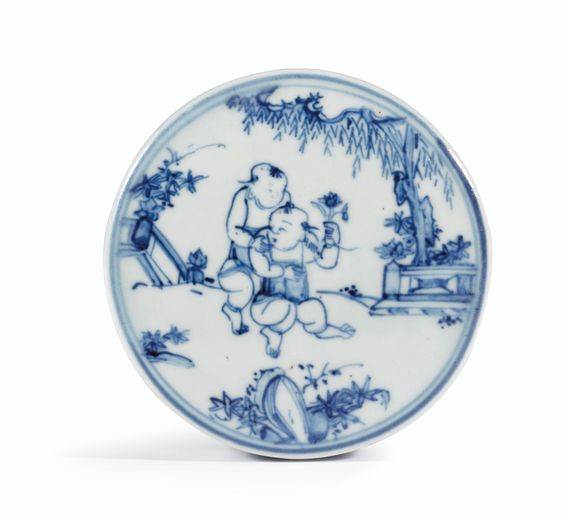 well potted and of circular section, the box comprising three separate trays and a cover of slightly domed form, the sides of the tiers bordered in various tones of cobalt-blue with a continuous lotus scroll issuing large lotus blooms and small curling leaves, the domed cover with two young boys next to floral sprigs and a fence, one boy standing behind the other with his hands on the latter's shoulders whilst the latter holds a lotus stem in his left hand, the sides detailed with a classic scroll band.

Porcelain bowl with underglaze blue decoration. This deep bowl is finely potted with rounded sides and a low foot ring. It is exquisitely painted in blurred tones of bright cobalt blue beneath a yellow-tinged glaze characteristic of Chenghua period porcelains. Inside it is plain except for a double blue line edging the rim. Outside there are scenes of children playing in a garden. One boy, dressed in a three-quarter-length robe with leaf sprays, probably representing cassia, in his hair, rides a hobby horse. He is attended by another two boys wearing babies' bibs, one holding a lotus leaf like a parasol, the other a fly whisk. In the next group a child holds a brush-pen in one hand and a cassia spray in the other. He is flanked by further children sitting cross-legged and behind a boy wearing split pants points to the sky. In another scene a child is watering an object which appears to be a mandala or residence for the Buddha; he is attended by two boys who have abandoned their symbols and bells on the ground and two others, dressed in split pants and baby clothes, approach. Beyond the garden fence are mountain peaks and a lotus pond. In another scene four children are shown surrounding a large fish bowl. One child dressed in split pants holds a fish in his left hand, another points away and two others have their hands in the water grappling for more fish. The base is glazed but not marked.

Harrison-Hall 2001 6:2 :
This bowl may be dated by stylistic comparison to a smaller bowl with an everted lip painted in underglaze blue wlth sixteen children playing in a garden and with a Chenghua mark which was excavated at the imperial kilns at Jingdezhen. The subdued blue tones and yellow-tinged glaze are typical of the porcelain of the Chenghua era. These illustrations of children playing relate to images of 'One Hundred Children' which appear on a range of decorative objects -ceramics, lacquer wares and jades - as well as in paintings. In Confucian philosophy, many children, but particularly many sons, were essential for the fulfilment of family and ancestral duties, rites and ceremonies. Illustrations of 'One Hundred Children' represent a desire for fertility, wealth and happiness. The Chenghua emperor, Zhu Jianshen (1447-87), who ascended the throne at eighteen years of age, was certainly preoccupied with his lack of sons. His favourite consort, Lady Wan Guifei, was seventeen years his senior. Having lost her own child, she ensured that no other woman in the palace gave birth to an heir by sending a eunuch to administer poison to the pregnant consorts. Finally Lady Qi, a woman of Yao origin, managed to protect her son. He was hidden until he had reached the age of five and he then survived to succeed to the throne as the Hongzhi emperor.
Although designs of children at play are a traditional theme, they do not appear to have been used as a group to decorate porcelains made in the reign of the Ming dynasty founder Hongwu (1368-98). Indeed figural decoration at that time was very rare. The subject first appears on porcelain during the Yongle reign (1403-24), as evidenced by a bowl in the Tianminlou Collection. It is found thereafter in the Xuande period (1426-35) and Chenghua reign (1465-87). Later in the Ming it was also used in the Hongzhi (1488-1505), Jiajing (1522-66), Longqing (1567-72), Wanli (1573-1620) and Tianqi eras (1620-27). Another unmarked Chenghua bowl of the present type is in the Victoria and Albert Museum, London.

A tiered box painted on the cover with a lady and acolyte, in the Shanghai Museum, is illustrated in Wang Qingzheng, Underglaze Blue and Red. Elegant Decoration on Porcelain of Yuan, Ming and Qing, Hong Kong, 1993, pl. 121; and a Chenghua mark and period bowl painted with a related scene of boys in play, was included in the exhibition The Emperor's Broken China. Reconstructing Chenghua Porcelain, Sotheby’s London, 1995, cat. no. 54 (fig. 1).  A blue and white fragmentary box and cover decorated with a garden scene, probably a half-finished doucai piece, was also excavated from the Chenghua waste heaps of the Ming imperial kiln site at Jingdezhen, included in ibid., cat. no. 9, and illustrated in Imperial Porcelain: Recent Discoveries of Jingdezhen Ware, Museum of Oriental Ceramics, Osaka, 1995, cat. no. 114 (fig. 2). Compare also a two-tiered box attributed to the Zhengde reign (1505-1521), painted with figures in a landscape, illustrated in The Complete Collection of Treasures of the Palace Museum. Blue and White Porcelain with Underglaze Red (II), Shanghai, 2000, pl. 52. 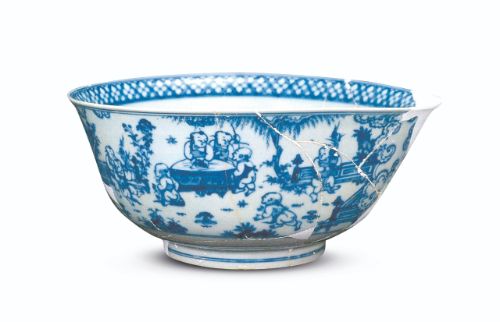 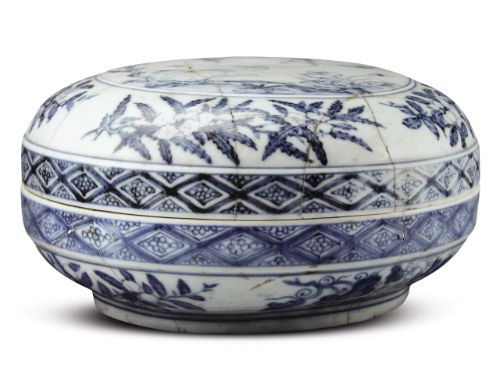