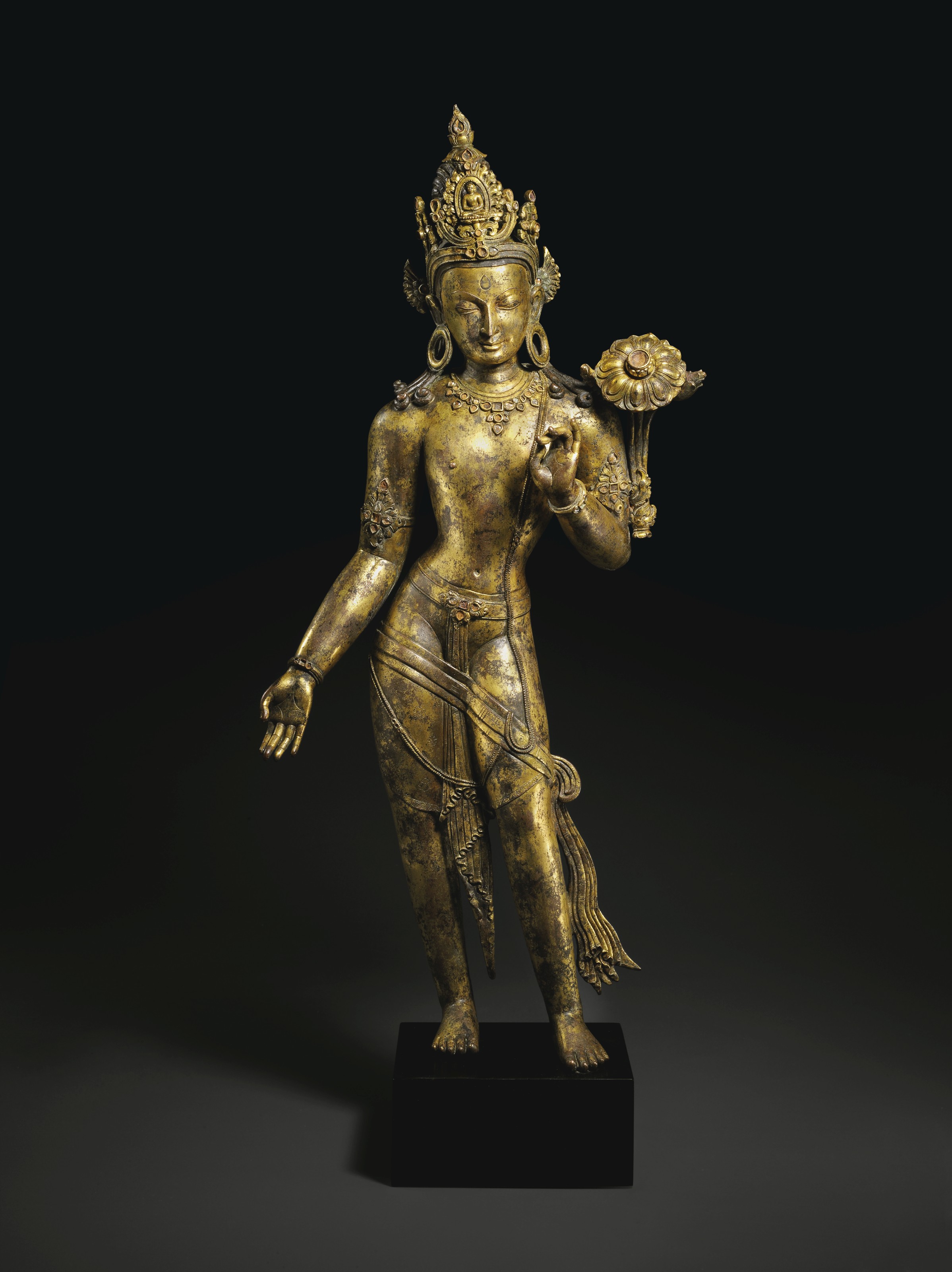 Standing with his right hand in varadamudra and a lotus blossoming at his left shoulder, dressed in a short, thin dhoti secured by a beaded belt with pendant ribbon, adorned with the sacred thread and sash hanging across the hips, the face with heavily-lidded downcast eyes and gently arching brows flanked by large hoop earrings, the hair piled into a high chignon and secured with a foliate
tiara centered with a seated Buddha.

Note: Avalokiteshvara, the "Lord Who Looks Upon the World," is the bodhisattva of compassion and one of the principle deities in Mahayana Buddhism. He is the spiritual successor to Amitabha, the Buddha of Infinite Light, who appears here finely rendered in the bodhisattva’s crown. Although he has attained enlightenment like a Buddha, the bodhisattva forgoes his escape from the suffering of rebirth to act as a guide to all living beings until they themselves have achieved nirvana. Like the lotus which rises from its murky bed below the water to blossom in the pristine air, Avalokiteshvara has detached himself from the pain and impurities of the material world; he is enlightened in body, speech, and mind.

Worshipped in Nepal from at least the mid-6th century, Avalokiteshvara was one of the most popular Buddhist deities in the Kathmandu Valley, rivaling the Buddha himself. With time, the compassionate characteristics of Avalokiteshvara became intertwined with the attributes of local Nepalese deities. A distinct style of representation emerged from this locus of fervent worship, drawing influence initially from the Gupta dynasty and later - as seen in this work - from the Pala dynasty of Northeastern India, resulting in a uniquely Newari aesthetic. In contrast to the post-Gupta Indian tradition of depicting him seated, in Nepal the deity is almost always shown standing. The Newari style is further characterized by the lithe form of the body and the gracefully swaying hips. The folds of the dhoti, simply patterned with stippling and flower-heads, hang between the legs and are secured diagonally across the hips with a sash, while the sacred thread extends almost to the knee.

Stylistically, the present work has much in common with two related examples. The first from the collection of Nasli and Alice Heeramaneck, now in the collection of the Los Angeles County Museum of Art (P. Pal, Art of Nepal, 1985, p. 108, fig. S29); and the second, a Padmapani from the Doris Wiener Collection, sold in these rooms on 20 March 2014, lot 92. Each figure embodies simplicity of form heightened with ornamentation that is characteristic of 13th century Nepalese sculpture. The bodies stand in a graceful tribhanga pose with soft rounded shoulders, tapered waists, and elongated naturalistic limbs. Their serene expressions are accentuated by downcast eyes, arched eyebrows, elegantly rendered noses, and bow-shaped mouths. The finely cast crowns and beaded jewelry are similarly emblematic of Nepalese sculpture from this period.

Standing over two feet tall, the exceptionally large Ellsworth Avalokiteshvara embodies the elegance and grace of the finest Nepalese bronze work. The gentle sway of the solid-cast body lends the figure an emotional depth. The naturalistic rendering of the form, seen particularly on the reverse, endows the figure with presence, and the outstretched hand graciously invites the viewer to approach. His gaze, inward and meditative, suggests the deep inner wisdom of an enlightened teacher. The overall effect is one of perfect harmony of form and meaning, capturing the essence of Avalokiteshvara, the embodiment of compassion. It is not surprising that Mr. Ellsworth chose his living room mantelpiece, a prominent and central spot in his home, to showcase this superlative work.