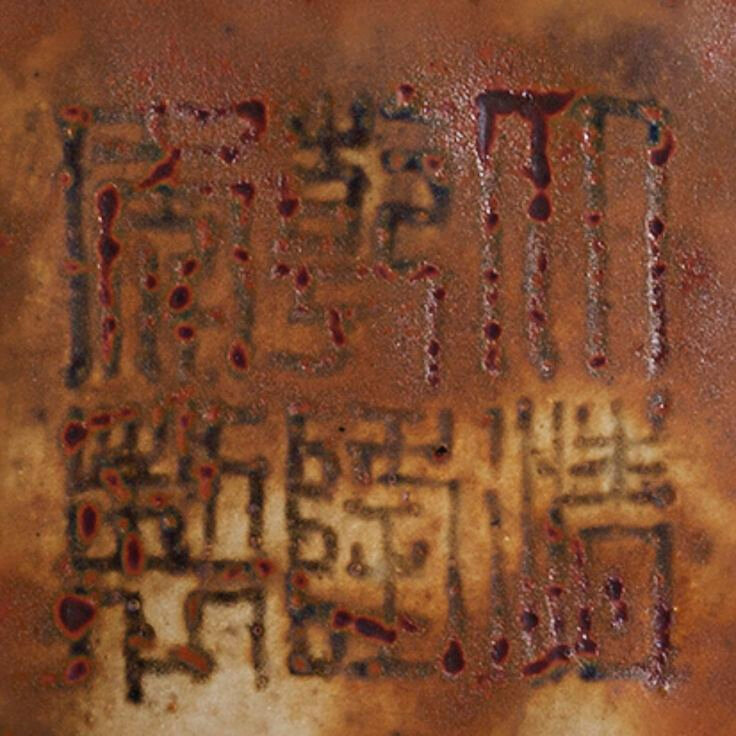 well potted with a pear-shaped body rising from a short splayed foot to a waisted neck and flared mouthrim, the exterior covered with a thick deep-purple glaze with splashes of milky bluish-lavender, the glaze stopping neatly at the mouthrim and footring, the interior applied with a milky-blue glaze with subtle lavender streaks, all suffused with a fine matrix of crackles, the base covered in a mottled mushroom-brown wash, incised with a six-character seal mark.

Note: Covered in rich and vibrant hues of ruby streaked with lavender and pulling away from the rim to reveal the buff body, this vase is a rare and striking example of flambé ware. A related vase, covered in a rich red glaze with flecks of purple, gilt-painted with flowers and an imperial poem, in the Palace Museum, Beijing, is illustrated in The Complete Collection of Treasures of the Palace Museum. Monochrome Porcelain, Hong Kong, 1999, pl. 182; and another, but the glaze of a lilac and milky-blue, was sold twice in these rooms, 27th April 1993, lot 84, and again, 8th April 2011, lot 3027. Compare also a slightly larger vase of this type, but with more red hues, in the Nanjing Museum, included in the exhibition Qing Imperial Porcelain of the Kangxi, Yongzheng and Qianlong Reigns, Art Gallery, The Chinese University of Hong Kong, Hong Kong, 1995, cat. no. 64; another from the collection of Thomas Barlow Walker and later the British Rail Pension Fund, sold in our New York rooms, 26th September 1972, lot 833, and again in our London rooms, 16th May 1989, lot 63.  and a slightly smaller example, with mauve and lavender glaze, was sold at Christie’s New York, 16th/17th September 2010, lot 1439.

By the Qing dynasty, Jun wares were regarded as objects of admiration at court as well as amongst literati connoisseurs and wealthy merchant collectors. The Yongzheng and Qianlong emperors sought to reproduce the beautiful glaze effects and graceful forms of Jun wares by commissioning copies from the imperial workshops at Jingdezhen. The streaks characteristic of this glaze are known as yaobian (‘transmutation glaze’). For the inspiration of this piece compare a Jun vase, in the National Palace Museum, Taipei, illustrated in Chun Ware of the Sung Dynasty, Hong Kong, 1961, pl. 3; and another from the Sir Percival David collection and now in the British Museum, London, included in Illustrated Catalogue of Ru, Guan, Jun, Guangdong and Yixing Wares, London, 1999, pl. 80.