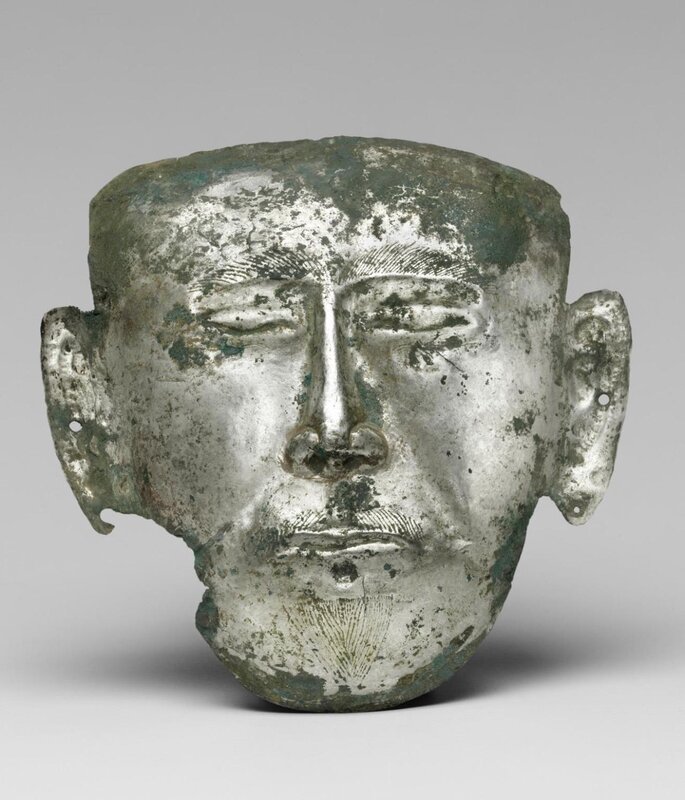 This mask depicts the serene face of a male who was part of the Khitan tribe, a people who ruled north China over a thousand years ago, during the Liao dynasty (907–1125). Placing a metal mask on the face of the deceased was a unique tradition of the nomadic Khitan; they buried their high-ranking men and women with various amounts of metal body attire such as a mask like this one for the face and a suit “woven” from wire for the body. The masks were highly personalized and fashioned in a variety of shapes and sizes, the type of metal depending on the status of the wearer. The simplest were made of thinly hammered bronze while those of silver and, in rare cases, gold were reserved for the elite. This example is formed from silver, with carefully modeled features and facial details delicately incised on the surface. The ears are pierced and were probably once adorned with earrings, a custom practiced by both male and female Khitan.

Funerary masks are well documented in many ancient cultures, including that of ancient Egypt and Greece, and are related to ideas of life after death. They appeared very early in China: the jade masks covering the faces of the dead in the Eastern Zhou period (770–256 BCE) and the jade suits encasing the bodies of the departed imperial family in the Han dynasty (206 BCE–220 CE) were thought to serve as protection in the afterlife. The Khitan, however, believed that a metal mask and suit would preserve the deceased from decay, a burial tradition closely related to the tribal customs practiced in Russia, in the south of Siberia, and in areas to the west of China.
Posté par : Alain Truong à 20:35 - Chine, Arts Décoratifs - Commentaires [0] - Permalien [#]
Tags : Funerary Mask, Late 10th - early 12th century, Liao Dynasty, silver