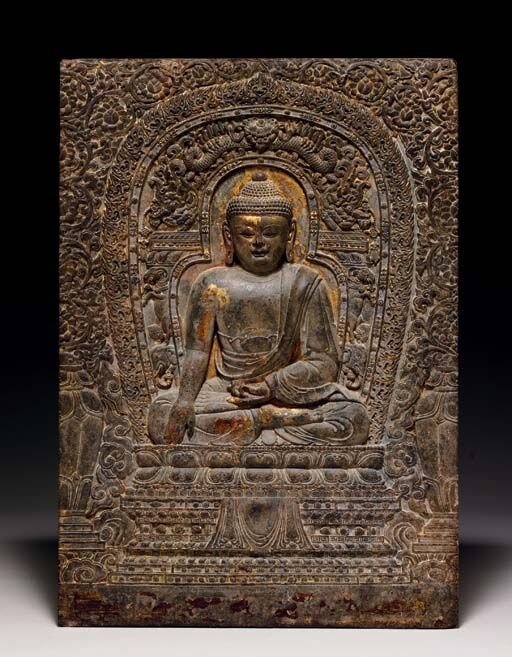 The rectangular plaque finely carved in the center with Buddha Aksobhya seated indhyanasana on a waisted lotus throne draped in the center with a cloth, with right hand in bhumisparsamudra and left resting in the lap in dhyanamudra, wearing a priest's robes draped crisply around the smoothly muscular body, the broad face with small mouth, wide nose and almost closed eyes below hair dressed in snail curls that also cover the usnisa, framed by a plain shaped halo following the outline of the body, which is further surrounded by a petal-shaped mandorla densely decorated above with a winged garuda grasping a serpent in its beak and claws above two makara spewing jeweled tassels supported by cross beams, below two rams grasping jeweled tassels in their mouths balanced atop the heads of elephants, all within a flame border surrounded by an outer field of undulating lotus scroll issuing from two lotus petal-carved vases raised on stands and surrounded by vapor, with remains of gilding and traces of red pigment.

Note: The appearance of the Buddha and lotus throne and the carving of his throne with elements such as the garuda biting a snake, makara and elephants show strong Nepalese-Tibetan characteristics that were introduced in the Yuan dynasty. These motifs are ultimately of Indian origin, as are the lotus scrolls around the edges, which in Chinese are known as 'Indian lotus'. The Indo-Tibetan form of esoteric Buddhism was the official religion of the Mongol court and was believed to have efficacious protective and martial powers. Its observance at court continued into the Ming period. Similar representations of Buddha can be seen in Tibetan and Nepalese painting, woodblock-printed sutras, and stone carvings, such as in marble at the great stone arch at the Juyongguan, northwest of Beijing (dated 1342-1345) and the caves at Feilaifeng near Hangzhou. For comparative material see Kaikodo Journal, Autumn 1997, pp. 390-3, which refers to no. 88 (pp. 258-9), which was later sold in these rooms, 21 September 2004, lot 139. That plaque was said to be from a pagoda in Nanjing. If so, that plaque and the present plaque, which are so similar, were probably from a group that was set into the walls or around the base of the pagoda. With the establishment of the Ming dynasty and its capital at Nanjing, numerous new Buddhist projects were likely to have been initiated under the Hongwu (r. 1368-1398) and Yongle emperors (r. 1403-1424). The gesture of touching the earth, bhumisparsamudra, refers to the historical Buddha Sakyamuni calling the earth to witness at the moment of his enlightenment. In later Buddhist imagery, beginning in the Tang period, this became the distinguishing mudra of one of the five principal directional Buddhas of esoteric Buddhism, Aksobhya, who presides over the East. Similar representations of Buddha displaying the earth-touching gesture can be seen on the marble arch-shaped pagoda base at the Juyongguan, both in the mandalaof Aksobhya and among the Buddhas of the ten directions. See Jiro Murata and Akira Fujieda, Koyokan (Chü-yung-kuan: The Buddhist Arch of the Fourteenth Century A.D. at the Pass of the Great Wall Northwest of Peking), Kyoto University, 1957, vol. 1, p. 77 and vol. 2, pl. 80.