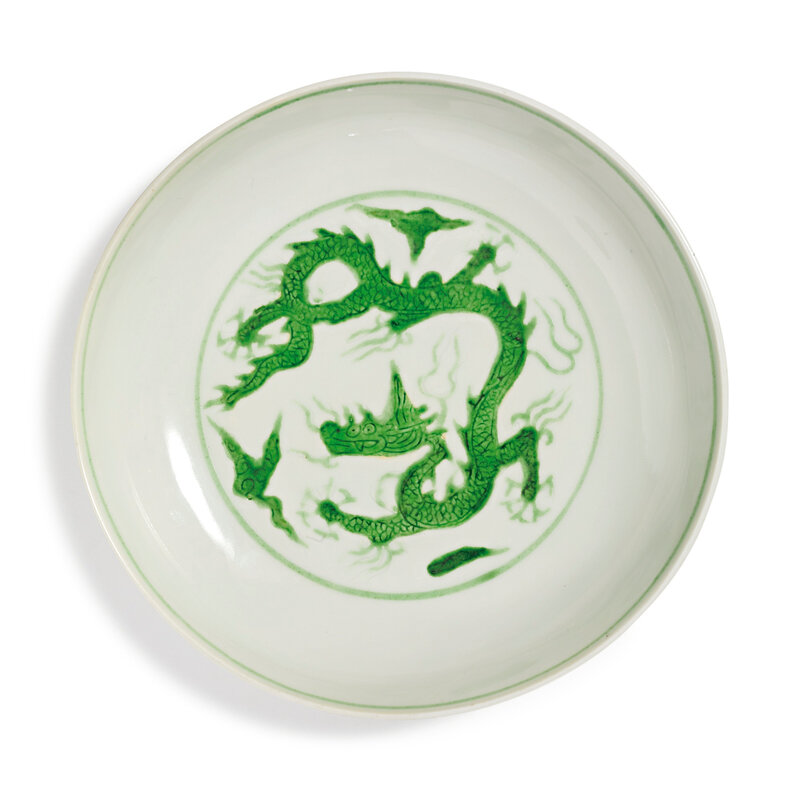 with shallow rounded sides supported on a short slightly tapered foot, the interior decorated with a central medallion enclosing a five-clawed dragon writhing among stylized clouds, the head, scaly body and limbs finely incised, reserved on the biscuit and covered with green enamel, the claws and spikes picked out in green enamel over the glaze, all within a green circle repeated at the rim, the exterior incised with two five-clawed dragons striding above crested waves and rocks, similarly reserved on the biscuit and painted with a green enamel against the white ground, the base with a six-character reign in underglaze blue within a double ring.

Note: Imperial porcelain dishes with green-enameled dragon designs first appeared in the Chenghua period (1465-87), with and sometimes without reign marks. More were manufactured in later periods of the Ming dynasty, particularly during the Hongzhi (r. 1488-1505) and Zhengde (r. 1506-21) periods, and almost always with reign marks. The various periods of the Qing dynasty spanning from Kangxi (r. 1662-1722) to Guangxu (r. 1875-1908) also saw the production of ‘green dragon’ dishes, demonstrating their importance as a classic and representative type of porcelain favored at the Ming and Qing imperial courts. As well as saucer-shaped dishes, matching bowls were made in this decorative scheme. While dragons on most Qing dishes are only painted over the glaze in green, on Ming examples they are usually first incised and reserved in the biscuit during firing and their silhouettes then filled with green enamel for a second firing. This extra procedure of incising gives a somewhat three dimensional touch to the finished product.

Closely related dishes include one in the British Museum, London, published in Jessica Harrison-Hall, Ming Ceramics in the British Museum, London, 2001, pls 8: 33-35; one in the Shanghai Museum, illustrated in Lu Minghua, Shanghai Bowuguan zangpin yanjiu daxi/Studies of the Shanghai Museum Collections: A Series of Monographs. Mingdai guanyao ciqi [Ming imperial porcelain], Shanghai, 2007, pl. 1-44; and another from the Leshantang Collection, published in The Leshantang Collection of Chinese Porcelain, Taipei, 2005, pl. 18. See also a dish of this type, from collections of R.H.R. Palmer and Edward T. Chow, included in the Oriental Ceramic Society exhibition Polychrome Porcelain of the Ming and Manchu Dynasties, London, 1950, cat. no. 77, sold in our London rooms, 27th November 1962, lot 18 and our Hong Kong rooms, 25th November 1980, lot 37; a second dish from the Edward T. Chow collection sold in our Hong Kong rooms, 19th May 1981, lot 447; and a dish from the British Rail Pension Fund sold four times in our rooms, in London, 13th December 1966, lot 73; 1st July 1969, lot 149; and 17th November 1970, lot 76, and in Hong Kong, 16th May 1989, lot 27.