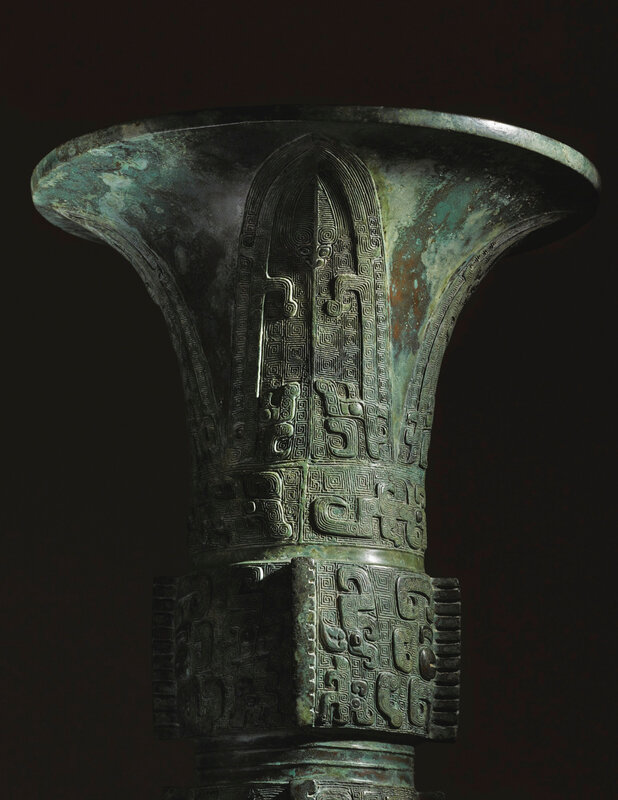 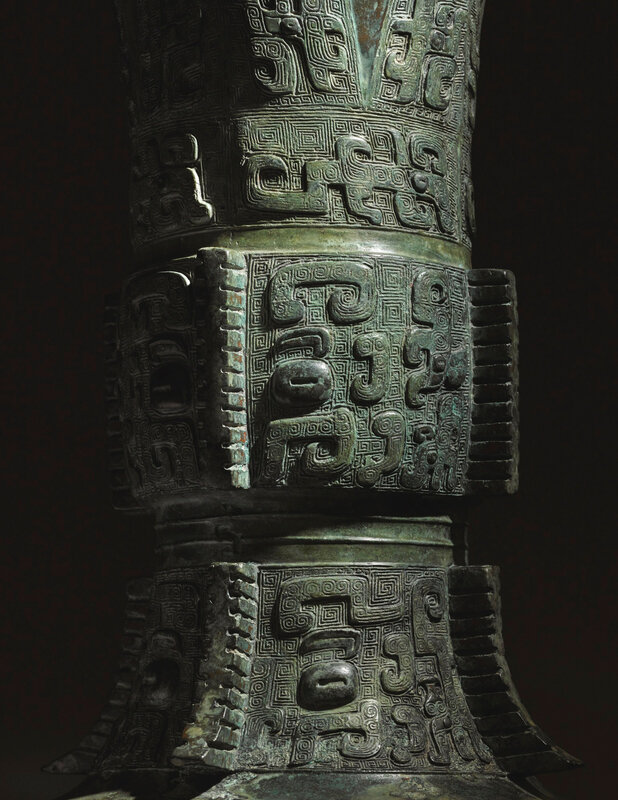 of cylindrical form, superbly cast with a subtly rounded midsection set above a spreading foot and surmounted by a trumpet neck, recessed horizontal bands separating each section and four vertical notched flanges dividing the foot and midsection into quadrants, the foot and midsection each cast in high relief with two pairs of dissolved taotie masks staring outward and kuilong crawling alongside the flanges, further kuilong marching around the trumpet neck and extending their slender bodies to border the arched blades ascending toward the rim, a pendent cicada positioned at the pinnacle of each blade, the creatures' bodies and the ground both covered with a fine leiwen pattern, the interior of the base cast with two large characters reading luo jing, wood stand, two Japanese wood boxes, handwritten description label by Kunio Fujita, senior curator for Asian Art, Tokyo National Museum, circa 1960 (6). 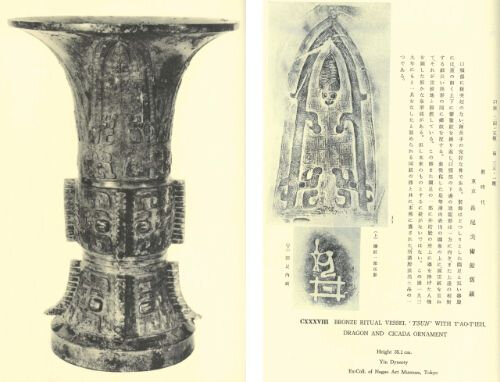 The Dragon and the Cicada: Visions of Transformation on a Magnificent Shang Dynasty Bronze Zun

Notable for its crisp decoration that has been remarkably preserved, this zun is an outstanding example of late Shang bronze workmanship. Similar to a gu but broader across the body, zun of this form are relatively rare. The craftsman has paid careful attention to the decorative motifs, which complement its elegant silhouette, by placing cicadas at the tip of each upright blade encircling the neck and in the bold rendering of the taotie mask, with prominent jaws and C-shaped horns. Both the shape and style of the decoration suggest a late Yinxu date, also evident in the bold high-relief motifs and allover leiwen.

Related zun are more commonly known with upward-looking taotie masks enclosed within the blades; see one in the Arthur M. Sackler Collection, illustrated in Robert W. Bagley, Shang Ritual Bronzes in the Arthur M. Sackler Collections, vol. 1, Cambridge, MA., 1987, pl. 46; and another in the National Palace Museum, Taipei, published in Shang Ritual Bronzes in the National Palace Museum Collection, Taipei, 1998, pl. 56. Compare also a similar zun, but lacking leiwen on the high-relief motifs and with an additional band of two pairs of kuilong below the neck, from the collection of Sakamoto Gorō, sold in these rooms, 13th September 2016, lot 12. Some vessels of similar beaker shape have flanges extending to the neck; one in the Arthur M. Sackler Collection illustrated in Robert W. Bagley, op. cit., pl. 47, was sold in these rooms, 2nd-5th May 1972, lot 435; another, in the Shanxi Archaeological Research Institute, is published in Zhongguo qingtongqi quanji, vol. 4, Beijing, 1998, pl. 119; and a third in the Shanghai Museum, is illustrated in Shanghai bowuguan cang. Qingtongqi [Ancient bronzes in the Shanghai Museum], Shanghai, 1964, pl. 8. See also a zun of slightly stouter shape, illustrated in Wang Tao, Chinese Bronzes from the Meiyintang Collection, London, 2009, pl. 62, where the author notes that these types of high-relief decoration over a dense background design ‘fall into the “transitional” style between the late Shang dynasty and the early Western Zhou’ (see p. 135).

Originally used as ritual wine containers, zun are known from the late Erligang period and grew in popularity during the Shang dynasty. They were made either with angular shoulders or of beaker shape, such as the present piece, which appears to have evolved from archaic bronze gu. Elongated zun were not among the altar vessels recovered from Fu Hao’s tomb, in Anyang, Henan province, dated to around 1200 BC, which suggests that they became popular only after this period.

In ancient China, the cicada was a symbol of transformation and resurrection due to its life cycle. After mating, the female cicada deposits eggs into a groove she cuts into a tree limb; after a nymph hatches, it feeds on the tree fluids until it develops sufficient strength to emerge from the bark and crawl down into the earth; the nymph then dwells underground for two to seventeen years, tunneling and feeding all the while; eventually, the mature cicada emerges from the ground, sheds its skin, spreads its wings, and finds a mate. The insect’s repeated emergence from burial, each time returning to the world in a new, stronger phase of its life, inspired a sense of hope for the regeneration of other beings in the spiritual realm of the ancestors. Thus, as early as the 3rd millennium BC, the Chinese carved jade cicadas and interred them in the ritual burial of the deceased; a practice that continued through the Han dynasty. For a jade cicada from the Hongshan Culture dated to around 2500 BC, see an example in the collection of the British Museum (coll. no. 2006,0502.10). Images of cicadas cast onto bronze vessels, which could be used in life or interred with the body at death, would have borne the same connotations for the users or owners of the vessels.

The other zoomorphic motifs cast onto the present zun—the taotie and kuilong—were also potent totems. According to the Lüshi chunqiu (‘Master Lü’s Spring and Autumn Annals’) taotie were ferocious beasts that destroyed their own bodies before devouring men, which is why they are depicted as disembodied heads on Shang and Zhou dynasty bronzes. The Shanhaijing (‘Classic of the Mountains and Seas’) maintains that kui were single-footed dragon-form spirits that dwelled underwater and caused violent storms when they emerged, thereby associating them with thunder. In the Zuozhuan(‘Commentary of Zuo’), 3rd year of Duke Xuan (606 BC), Wangsun Man of Ding explains to the King of Chu that the creatures represented on bronze ding allow people to identify the ‘helping and the harming spirits’ as a way of protecting the people and harmonizing ‘the high and the low’ (e.g., heaven / the ancestral realm and earth). It follows that the same would have been true for animal representations on other ritual paraphernalia, including the present zun.

It is well known that the Shang rulers used bronze ritual vessels and other tools (such as oracle bones and divination) to commune with the higher powers of the ancestral spirit realm. Rulers may have performed the rituals personally, or with the aid of a spirit medium, such as a shaman. These rituals underpinned the religio-political order, therefore the selection and application of animal, insect, and abstract images for these ritual implements, as well as the contents of the vessels for consumption, were deliberate and for particular ends. Claude Lévi-Strauss argues in his seminal essay, “Split Representation in the Art of Asia and America” (1963), that the use of masks in ritual, regardless of if the mask is worn as a costume or applied to a ritual implement (e.g., taotie on the zun), permits the user to embody or otherwise harness the power of the creature(s) depicted. Furthermore, Lévi-Strauss, along with Harlee G. Creel, and K. C. Chang, among other scholars, have observed that Shang dynasty bronzes frequently depict animals in ‘split representation’, meaning that both sides of the animal are depicted in profile. In the case of the present zun, this occurs in the taotie masks, the cicada, and the kuilong at the edges of the upright blades. Split representation allows the entire creature to be rendered, presumably improving the potency through the complete imaging of the animal. Split representation also effectively wraps the animal’s ‘skin’ around the vessel, implying that the contents of the vessel become synonymous with the contents of the animal(s). When the shaman or ruler drank the wine, they were in fact ingesting these creatures and the powers possessed by each. This process in conjunction with the mind-altering properties inherent to the wine itself would have enabled those who drank from the present zun to physically, psychologically, and spiritually bring the taotie, kuilong, and cicada into themselves. The drinker would transform into an elevated state embodying the properties of these creatures as he transcended the divide between the mortal and the spirit realms.