cast with a tall spreading foot supporting a globular body surmounted by a trumpet neck, the sides of the belly cast with three dissolved taotie masks, their horns, jaws, and other features abstractly rendered in low-relief hooked curls and the hemispherical eyes emerging in high relief, a procession of kuilong marching in the band above, the angled shoulder with a band of three simplified taotie masks aligned with their counterparts below, the center of each superimposed with a bovine mask in high relief, the foot and lower neck each cast with two parallel string-relief bands, the dark olive-gray patina mottled with various tones of green and brownish-red oxidation.

Note: The origin of the zun form is discussed by Robert W. Bagley in Shang Ritual Bronzes from the Arthur M. Sackler Collections, Washington D.C., 1987, p. 265, where he observes that zun seem to have evolved from the earlier lei. Zun was one of the more popular forms during the first half of the Anyang period, and produced in a variety of sizes and proportions of the three sections.

The development and flourishing of the bronze workshops in Anyang coincided with the establishment of the Shang capital to the modern-day village of Xiaotun, near Anyang, by King Wuding (r. circa 1250-1192 BC). With his conquest of the Jiangnan regions, bronze factories in the south were destroyed and the artisans were transferred to Anyang.  Bronze vessels of Anyang are characterized by highly ornate designs that often incorporate zoomorphic features. Crafted using piece-mold casting, sharp, bold designs as seen on the present were achieved. For a thorough analysis on the development of bronze workmanship during this time, see Su Rongyu, ‘Bronze-Casting Technology in the Late Shang Dynasty’, Mirroring China’s Past. Emperors, Scholars, and their Bronzes, The Art Institute of Chicago, 2018, pp 32-37. 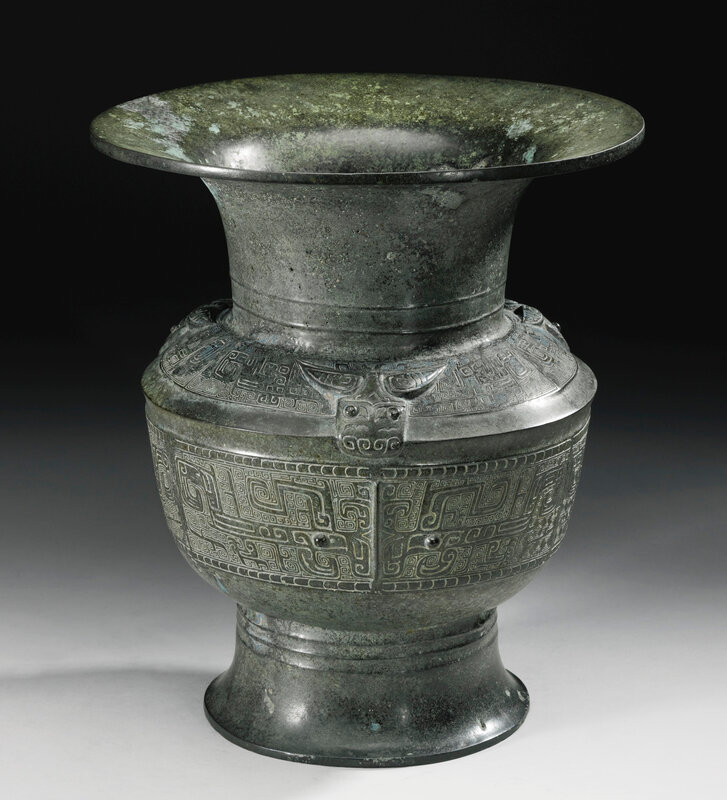