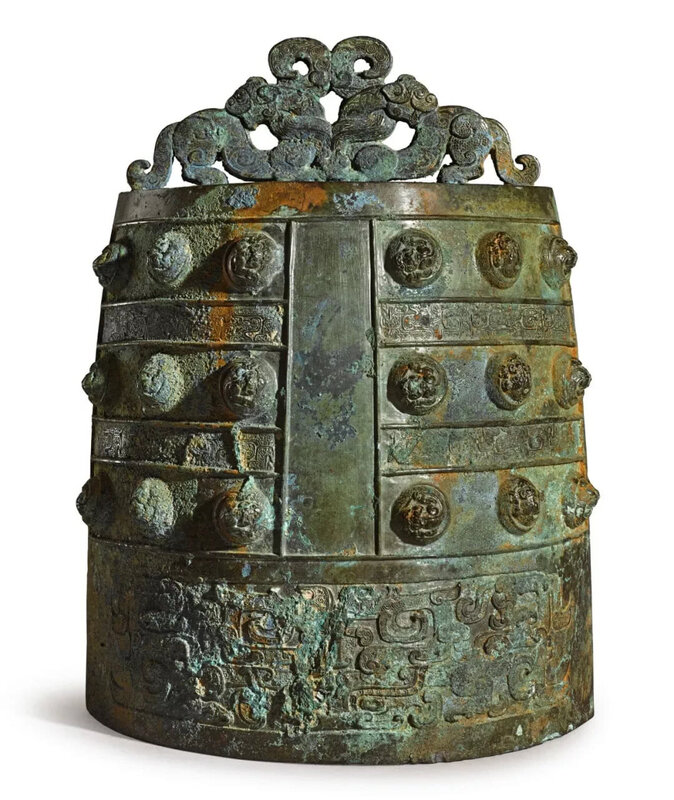 of pointed oval section, each side cast with four principal registers, the broad lowest register cast in low relief with a taotie mask flanked by dragons, the creatures' bodies richly patterned in leiwen spirals, the upper three registers divided by a central vertical panel and each bearing six large hemispherical bosses cast in the form of coiled animals, horizontal bands of interlaced dragons between each register, the flat top supporting an elaborate openwork suspension loop in the form of a pair of confronting feline mythical beasts, their sinuous bodies moving in an undulating rhythm from their curling tails to their arched torsos and long necks turned back to grasp their backs with their jaws, two snakes twisting around the felines' necks and extending their tails upward to form twin loops, leiwen swirling across the bodies of the felines and snakes, the surface with a gray-green patina and scattered malachite, azurite, and brownish-red encrustations.

Note: Imposing in form and design, this bell reflects the sophistication of bronze musical instruments which had been produced in China since the thirteenth century BC. It is cast using techniques typical of the state of Jin (present-day Shanxi province), which became the center of bronze casting in north China and was renowned for exquisite bells such as the present.

Bells of this type were decorated by using carved clay pattern blocks, which were impressed onto strips of clay to become molds for the bronze. Thus, one master pattern block could be used for several different bells, and would have contributed to the impressive rows of identically decorated bells. As the bell would have been suspended from a loop, it is known as a bo or niu zhong. In large sets of bells, such as that from the tomb of the Marquis Yi of Zheng (d. ca. 433 BC), bo were included with sets of another type of bell, yong zhong.

Bells with very similar decoration and probably from the same set, of various sizes, include one exhibited in the Marco Polo Seventh Centenary Exhibition, Chinese Art, Venice, 1954, cat. no. 75 (16.5 inches high); one from the Pillsbury Collection, illustrated in George W. Weber, The Ornaments of Late Chou Bronzes, New Brunswick, 1973, pl. 61 (12.5 inches); another included in the Exhibition of Chinese Ritual Bronzes, Detroit Institute of Art, Detroit, 1940, cat. no. 45 (11.75 inches); and a fourth, publisheded in Rene-Yvon Lefebvre-d’Argence, Ancient Chinese Bronzes in the Avery Brundage Collection,  Berkeley, 1966, pl. XLVI B. Further bells of this type include one in the Metropolitan Museum of Art, New York, acc. no. 1988.20.7; one in the British Museum, London, published in Jessica Rawson, Art and Ritual, London, 1987, pl. 35; and another in the Compton Verney Art Gallery, Warwickshire, coll. no. CVCSC 0405.A. A set of fourteen bells of related design, excavated at Jinshengcun, Taiyuan, Shanxi province, is illustrated in Zhongguo qingtongqi quanji [The complete collection of Chinese archaic bronzes], vol. 8, Beijing, 1995, pls 113 and 114. According to Jessica Rawson in Mysteries of Ancient China. New Discoveries from Ancient China, London, 1996, p. 134, ‘their elliptical cross section is crucial to the musical quality and determines the two notes that can be achieved: one by striking the bell on the outside at the central point of the lip, and the other by striking the corner’.