A Rare Painted Limestone Figure of a Standing Bodhisattva from the Tang dynasty that fetched $4.3 million – far surpassing its high estimate of $2.5 million. Courtesy Sotheby's.

The day began with an auction dedicated to a selection of magnificent Chinese Buddhist sculpture from the collection of Stephen Junkunc, III – a Chicago-based connoisseur who formed one of the largest and most important collections of Chinese art ever assembled in the United States. The sale offered works spanning nearly 1,000 years of early Buddhist stone, lacquer and gilt-bronze sculptures dating from the Northern Wei to Ming dynasties, led by a Rare Painted Limestone Figure of a Standing Bodhisattva from the Tang dynasty that fetched $4.3 million – far surpassing its high estimate of $2.5 million. It is a classic example of China’s Buddhist stone carving from the High Tang period under Emperor Xuanzong (r. 713-755) – the period that saw perhaps the greatest flowering of China’s plastic arts. Cf. my post: An exceptional large limestone figure of a Bodhisattva, Tang dynasty (618-907)

Works from the Junkunc Collection also performed well during today’s various-owner auction of Important Chinese Art, with exceptional ceramics from the storied collection commanding a number of the sale’s top prices. The group was led by a Fine and Rare 'Guan'-Type Vase, Qianlong Seal Mark and Period, which soared to $423,000 – more than five times its high estimate of $80,000. Notable for its elegant form and subtle bluish glaze suffused with fine streaks of golden-brown crackles, this well-potted vase embodies the Qianlong emperor’s fondness for celebrated Guan ware of the Southern Song dynasty. Cf. my post: Seven Exceptional Pieces of Chinese Porcelain from the Junkunc Collection

Outside of the Junkunc Collection, the Important Chinese Art auction featured an Archaic Bronze Ritual Vessel (Zun) from the Shang Dynasty, Yinxu Period, which achieved $1.5 million (estimate $650/850,000). Notable for its crisp decoration that has been remarkably preserved, this zun is an outstanding example of late Shang bronze workmanship. Originally used as ritual wine containers, it is well known that the Shang rulers used zun and other tools to commune with the higher powers of the ancestral spirit realm. Rulers may have performed the rituals personally, or with the aid of a spirit medium, such as a shaman. 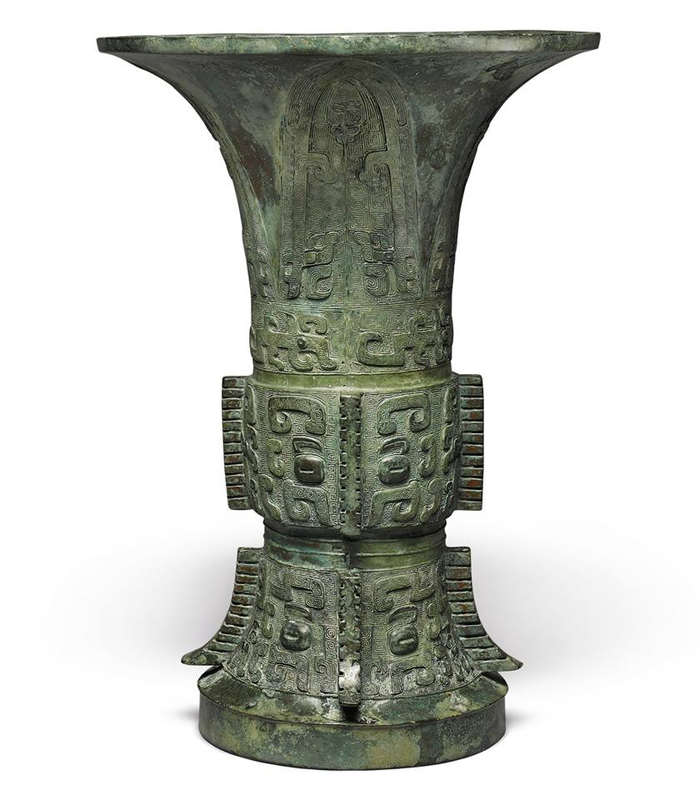 Regarding today’s results, Angela McAteer, Head of Sotheby’s Chinese Works of Art Department in New York, commented: “It was an honor to have been entrusted with the superb works offered today from the Junkunc Collection, and a great joy to work with the family of Stephen Junkunc, III to share his story with collectors and admirers worldwide. We were pleased to see an international mix of participants in the morning auction devoted to his incredible selection of Chinese Buddhist sculpture, with top buyers spanning Asia as well as the United States.”