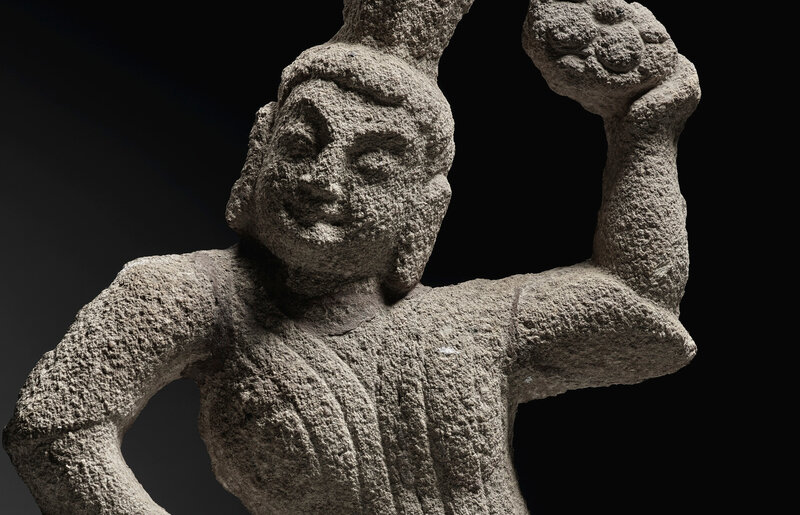 the graceful spirit shown in three-quarter view, kneeling on the proper left leg, with the right arm resting on the bent right knee, the left arm raised high and holding a floral medallion, the torso turned frontally, adorned in robes vertically incised, the head tilted and looking up, the serene face with a benevolent expression, the thick locks of hair swept up into a high topknot, mounted and supported on a stone stand (2).

Note: This image of a celestial being, kneeling in devotion with hand raised with an offering, is unconventional in its iconography. Its style of carving, rendered in three-quarter view with shallow relief details and sensitively modeled face, is characteristic of the Northern Wei (386-594) style found at China’s main cave temples, particularly those at Yungang and Tianlongshan. Although fragmentary and originally part of a monumental frieze, this large figure, with an elegant willowy body and a subliminal smile that conveys a sense of spiritual modesty, is striking in its own right.

The dynamic pose and high topknot suggest this figure is an apsara, or feitian (‘flying in heaven’), a radiant celestial nymph that originated in Hindu culture. During the Northern Wei dynasty, these figures were used to animate and enliven votive altars, Buddhist triad groups and cave niches as beautiful enhancement to the heavenly realm. They were often depicted as graceful, enchanting ladies hovering mid-air around the Buddha or bodhisattvas performing dancing motions or playing musical instruments. It is uncommon to find kneeling depictions of apsara, although a limestone relief carving depicting one in this devout stance, from the collection of J.T. Tai, was sold in our Hong Kong rooms, 29th April 1997, lot 713, and published in Bore baoxiang Jingyatang cang Zhongguo foxiang yishu/The Treasures of Chinese Buddhist Sculptures, Taipei, 2016, pl. 5; and another can be seen on the rear wall of the Central Binyang cave, one of the main caves at Longmen near Luoyang, Henan province, illustrated in situ in Zhongguo meishu quanji: Diaosu bian [Complete series on Chinese art: Sculpture section], 11: Longmen shiku diaoke [Sculptures of the Longmen caves], Shanghai, 1988, pl. 40.

Sandstone figures of apsara, similarly rendered in a softly rounded style, can be found in the Yungang caves located in Datong, Shanxi province; see the figures on the wall of Cave no. 6, adorned in long flowing robes as indicated by vertical incised lines, illustrated in Yungang shiku/Yunkang Caves, Beijing, 1977, pls 17 and 18; a smaller sandstone fragment of an apsara documented as being from the Yungang cave complex, formerly in the Bjorkman Collection, Switzerland, illustrated in An Exhibition of Chinese Stone Sculptures. C.T. Loo & Co., New York, 1940, cat. no. 13, pl 8, and exhibited in Chinese Buddhist Sculpture from Northern Wei to Ming, Eskenazi, Ltd., New York, 2002, pl.3; and another, sold at Christie’s London, 15th November 2000, lot 79.