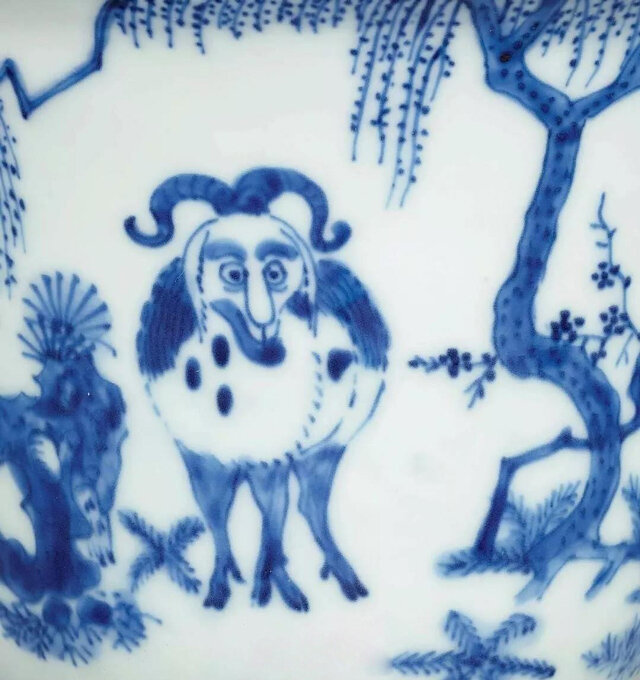 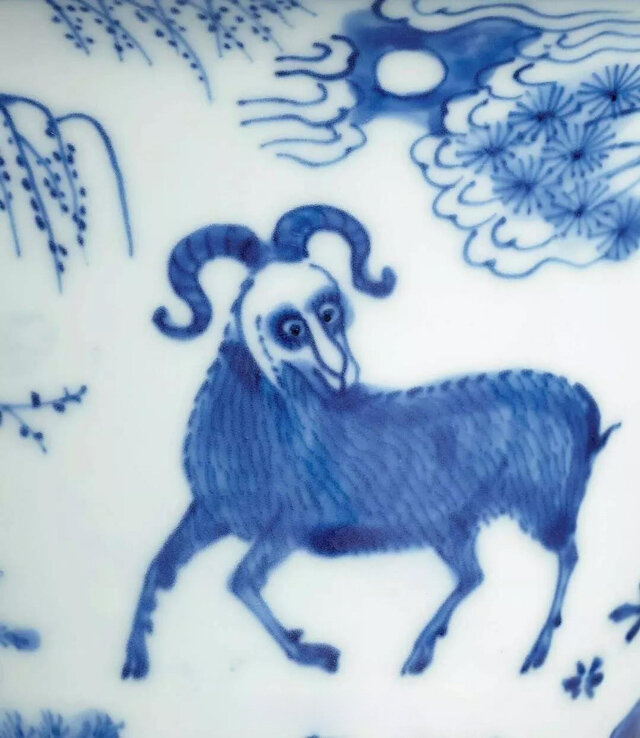 each of bell shape, well potted with deep rounded sides supported on a tapered foot, elegantly sweeping up to a wide flared rim, the exterior vividly painted in rich cobalt-blue tones, depicting three rams in a landscape with pine, willow, bamboo and shrubs growing from pierced rocks, all between double-line borders, the interior with a central medallion enclosing a qilin amongst a landscape, below a diaper band around the rim, the base inscribed with a six-character reign mark within a double-circle.

Note: Bowls decorated with the 'Three Rams' design are extremely rare, although a comparable example in the National Palace Museum, Taipei, is illustrated in the National Palace Museum Quarterly, vol. II, no. 3, 1968, pp. 29-45, pl. XII. See another bowl of this type, from the Baur collection, Geneva, included in the Oriental Ceramic Society exhibition The Animal in Chinese Art, London, 1968, cat. no. 259, and also published in John Ayers, The Baur Collection, Geneva, vol. II, Geneva, 1969, pl. A154, where Ayers notes that Tao shuo [Description of Ceramics] lists among wares made in this reign circular dishes decorated inside with the three rams, emblematic of the reviving power of the Spring. A third example can be found in the Shanghai Museum illustrated in Zhongguo taoci quanji [Complete series on Chinese ceramics], vol. 12, Shanghai, 2000, pl. 157. The only pair to have appeared at auction is a pair from the collection of J.M. Hu, sold in our New York rooms, 4th June 1985, lot 15, and again in these rooms, 9th October 2007, lot 1559, and now in the Alan Chuang collection, illustrated in Julian Thompson. The Alan Chuang Collection of Chinese Porcelain, Hong Kong, 2009, pp. 88-91.

The 'Three Rams' (san yang) design represents a change of fortune with the arrival of Spring and the New Year. The three rams are often shown together with the the rising sun (taiyang) to form the rebus for 'three yang bring prosperity'. Yijing [Book of Changes] first mentions the phrase san yang referring to the three male lines, called tai, that symbolise heaven. The tai is positioned under three female lines called kun that represent earth. Hence the phrase Sanyang kaitai which means the New Year brings renewal and a change of fortune.

Commentaires sur A large and rare pair of blue and white 'ram' bowls, marks and period of Jiajing (1522-1566)