A rare underglaze-blue and yellow-enamelled 'Lotus bouquet' dish, mark and period of Yongzheng (1723-1735)

A rare underglaze-blue and yellow-enamelled 'Lotus bouquet' dish, mark and period of Yongzheng (1723-1735) 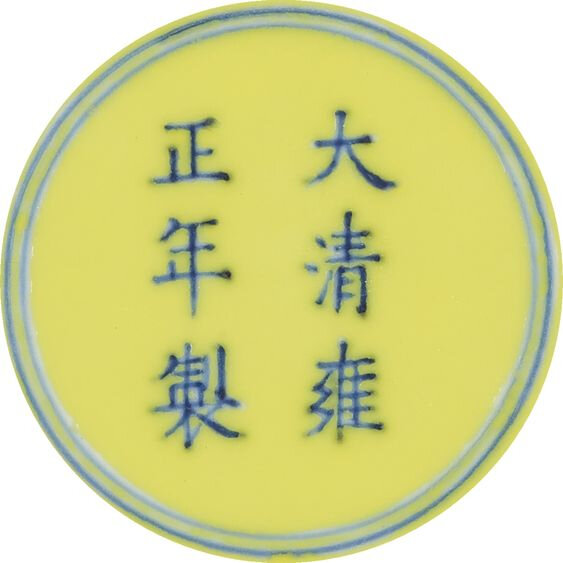 the rounded sides rising from a short tapered foot to a lipped rim, painted in various shades of cobalt blue against a bright yellow-enamelled ground, the interior with a ribboned bouquet of lotus and other water plants, encircled by a composite floral scroll of paired roses, lotus, camellias and other blossoms, all below a green-enamelled classic scroll border at the rim, the exterior similarly decorated with a composite flower scroll between a green-enamelled classic scroll around the foot and a band of keyfret at the rim, the base enamelled yellow and inscribed in underglaze blue with a six-character reign mark within a double circle.

Note: Both the design and colour palette of the dish are rooted in the Yongle and Xuande period prototypes that were developed at the Jingdezhen kilns in the early Ming dynasty. The lotus bouquet, with its beribboned cluster of lotus blooms, leaves and water weeds, is borrowed from a popular motif that was first employed in the Yongle period and an example from the Meiyintang collection, illustrated in Regina Krahl, Chinese Ceramics from the Meiyintang Collection, vol. 2, London, 1994, pl. 665, was sold in these rooms, 4th April 2012, lot 37. This design was revived in the Yongzheng period and two such examples are in the Palace Museum, Beijing, illustrated in Geng Baochang, ed., Gugong bowuyuan cang Ming chu qinghua ci [Early Ming blue-and-white porcelain in the Palace Museum], vol. 2, Beijing, 2002, pls 195 and 199.

In addition to the emulation of the past, this dish is also notable for the level of artistic innovation in the Yongzheng period and this is reflected in the pale green bands bordering the inner and outer rims of the dish. The cobalt-blue decoration and the application of the yellow enamel undoubtedly required the craftsmen's meticulous precision, however, a masterful control of the kilns was also of vital importance in the production of this dish, which is arguably an exemplar model of its type. No related example, however, with a yellow-ground reign mark appears to be recorded. The companion piece to the current dish, also from the collection of Edward T. Chow, bears a white-ground reign mark, and was sold in these rooms, 19th May 1981, lot 583. See also a related example, albeit fired to a less brilliant tone, sold in our London rooms, 11th May 2011, lot 213.

In the Yongzheng reign alone, this design was also produced in various dimensions. Compare one of the largest size, sold in these rooms 7th April 2011, lot 74, from the Meiyintang collection; and a smaller one, illustrated in John Ayers, Chinese Ceramics. The Koger Collection, London, 1985, pl. 122.