The galleries have seen major improvements to their design and infrastructure which considerably improve the display of some 430 artworks and archaeological and historical artefacts dating from ancient prehistory to the present day. © The Trustees of the British Museum.

LONDON.- The British Museum reopened some of its most popular galleries after nine-months of refurbishment. The Mitsubishi Corporation Japanese Galleries opened to the public again on 27 September 2018, displaying highlights from the Museum’s extensive Japanese collections, one of the most comprehensive outside of Japan. The refurbishment has been made possible by the generous support of Mitsubishi Corporation, who have sponsored the galleries since 2008, and who have confirmed a further 10 year partnership with the British Museum.

The galleries have seen major improvements to their design and infrastructure which considerably improve the display of some 430 artworks and archaeological and historical artefacts dating from ancient prehistory to the present day. Together, these objects tell many of the significant stories about Japan’s past and how it has interacted with the wider world, encouraging us to enjoy a deeper engagement with its present and future.

Several major new acquisitions are on display in the galleries for the first time. The centrepiece is a newly-acquired Edo period set of Samurai armour. Made in the 1700s, the acquisition of the armour has been made possible with the support of the JTI Japanese Acquisition Fund. This complete set of armour bears the crest of the Mori clan, who were an influential family of samurai lords who ruled in both the Akō and Mikazuki domains, Harima province (modern Hyōgo prefecture). Japan was largely at peace during the Edo period, from 1615-1868, and considerable artistry and craft skill was lavished on such armour, intended more for ceremony and display than for battle. This set comes with important accessories such as the battle surcoat (jinbaori), ceremonial fly whisk, and original lacquered storage boxes. 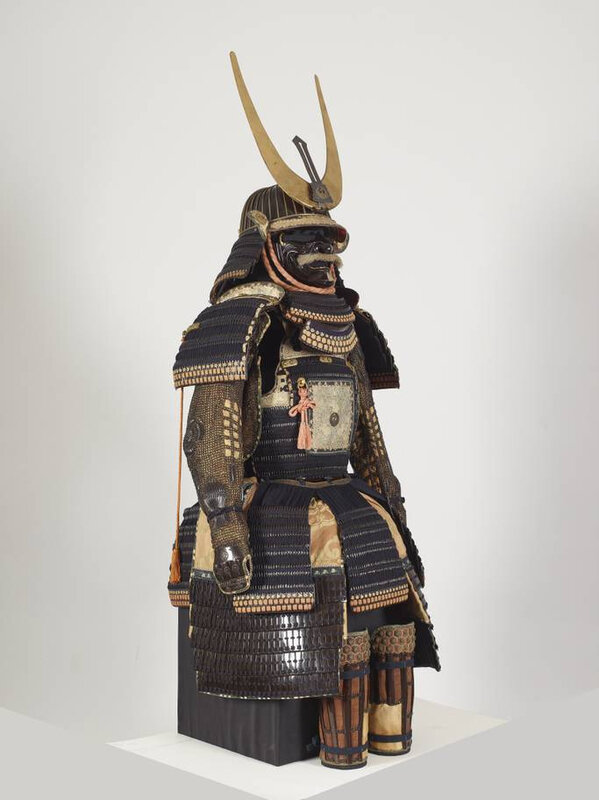 Another new acquisition greets visitors on their arrival: Time Waterfall – panel #8 (Blue) by Miyajima Tatsuo (b. 1957) is a contemporary artwork which consists of randomly generated digital numbers which tumble down an LED panel. This mesmerising work reminds us that life is constantly changing. Time Waterfall is being permanently displayed in the introductory area of the galleries, in counterpoint with the sculpture Bodhisattva Kannon of about 1930, which replicates a National Treasure of the AD 600s, and the Urasenke Foundation teahouse, where presentations are regularly held of ‘The Way of Tea’. Kitagawa Utamaro, Courtesan reading a letter, c. 1805-06, ink and colour on paper. © The Trustees of the British Museum.

Other significant new acquisitions, publicly displayed for the first time, include ‘Spirit Reborn’ (Kewtum kanna-suy) of 2017, a wood sculpture of a chick emerging from its shell and encountering the world of the first time, specially created for the new displays by Ainu artist Kaizawa Tōru (born 1959). Courtesan reading a letter of about 1805-1806 is a major late painting by the leading floating world artist Kitagawa Utamaro (d. 1806). The hanging scroll has been extensively conserved in the Museum’s Hirayama Studio, with support from the Sumitomo Foundation. 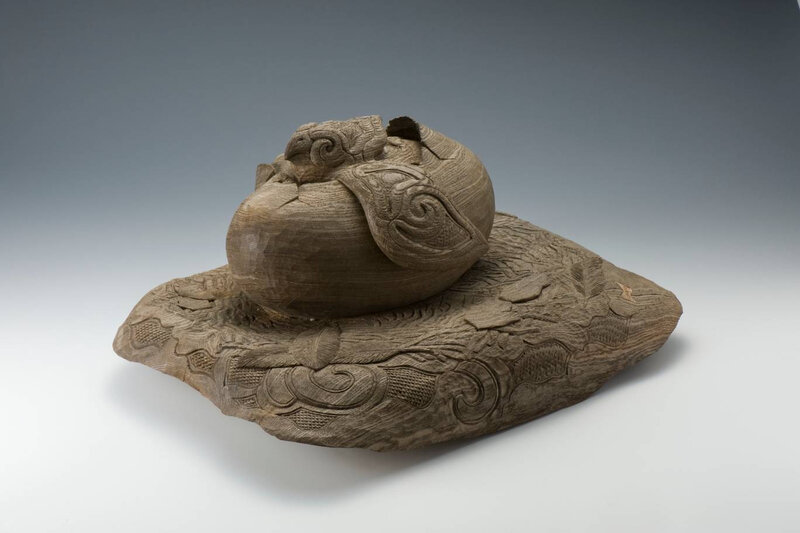 Other sections of the galleries have been revised. These include displays relating to the prehistoric periods of Jōmon (13,500 - 500 BC), Yayoi (500 BC – AD 250) and Kofun (AD 250 - 600) which will now present a more accurate chronology and include archaeological materials not previously shown. This draws on recent collaborative research among the British Museum, The Sainsbury Institute for the Study of Japanese Arts and Cultures (SISJAC) and leading archaeologists in Japan. Earthenware Flame pot. Excavated from the Iwanohara Site, Nagaoka City, Niigata Prefecture, 3000 BC. On loan from the Nagaoka City Board of Education. © The Trustees of the British Museum The Mitsubishi Corporation Japanese Galleries are some of the most popular in the Museum, with around 5 million visitors in the past decade. The sustained support provided by Mitsubishi Corporation’s sponsorship has successfully raised the visibility and profile of the Japanese collections, including through their support of the special exhibition Hokusai: beyond the Great Wave in 2017. The sell-out exhibition was critically acclaimed by the media and nearly 150,000 visitors saw the show during its run.

Hartwig Fischer, Director of the British Museum, said: “The British Museum has one of the most comprehensive collections of Japanese art and objects outside Japan and we actively collect contemporary and modern works. These newly refurbished galleries will now allow for a deeper understanding of a fascinating culture and an important country, and ensure the displays remain lively and engaging, attracting repeat visitors. We are hugely grateful to Mitsubishi Corporation for the opportunity to carry out these improvements. This gallery, along with the recently redeveloped Sir Joseph Hotung Gallery of China and South Asia, and the upcoming new Albukhary Foundation Gallery of the Islamic World, are allowing the British Museum to better demonstrate the interconnectedness of our shared cultures.”

Sesshū, ‘Broken ink’ landscape,mid-1400s. © The Trustees of the British Museum.

Kano School, Birds and flowers of autumn and winter, about 1610s. © The Trustees of the British Museum. Kōyū, 1685–1689, Bodhisattva Manjusri (Monju Bosatsu). Manjusri riding a lion. Wood with lacquer, gilding and applied pigments, about 1685-1689. © The Trustees of the British Museum. Utagawa Kuniyoshi, Sakata Kaidōmaru, 1837. © The Trustees of the British Museum.

Hibata Ōsuke, Pictorial record of US Commodore Matthew Perry’s second visit to Japan of 1854, about 1858. © The Trustees of the British Museum. Tokuda Yasokichi III, Dawn. Glazed Porcelain, 1992. Gift of the artist. © The Trustees of the British Museum. 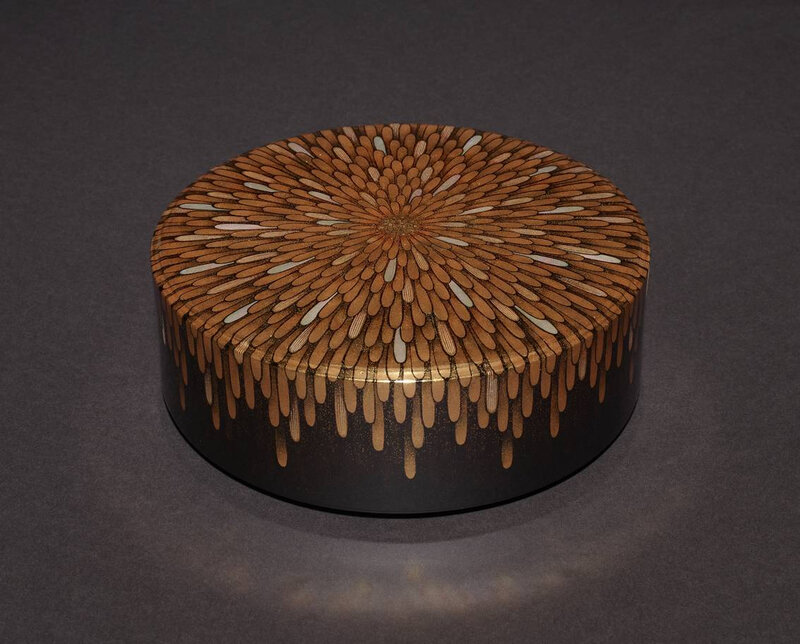 Murose Kazumi, Massive flower, 2012. Gold maki-e and mother-of-pearl inlaid in urushi lacquer on wood. Purchase made possible by the JTI Japanese Acquisition Fund © The Trustees of the British Museum. 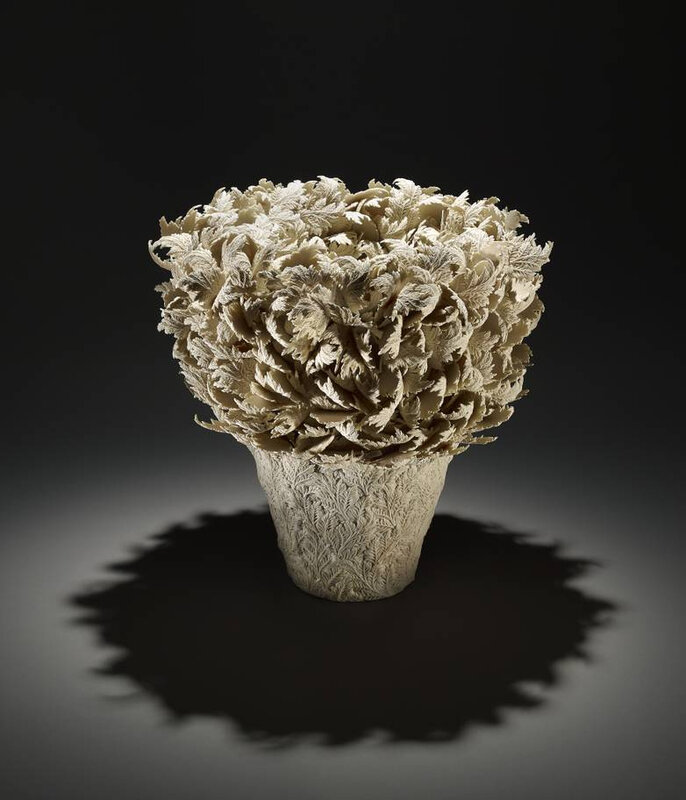