the flattened circular body rising from a slightly concave base to a cylindrical neck gradually flaring towards the rim, set with a pair of ruyi scrolled handles, the body deftly painted in rich cobalt-blue tones with simulated 'heaped and piled' effect, depicting on one side a magpie perched on a bough of flowering prunus beside leafy bamboo, the reverse similarly decorated with the perching bird rendered leaning forward on a flowering and budding branch of prunus beside bamboo, all between stylised flame scrolls at the shoulder and foot, the neck painted with further leafy shoots of bamboo, the concave base unglazed revealing the buff-coloured body.

Provenance: A private collection since the mid 1920s, Dorset.

Note: This elegant moonflask assumes an immediate sense of familiarity through the meticulously rendered design and form, both of which are made to replicate historical masterpieces of the early Ming dynasty. Created during the reign of the Yongzheng Emperor (r. 1723-1735), it reflects the Emperor’s utmost respect for the nation’s glorious past and the remarkable technical development achieved at the imperial kiln at Jingdezhen during his reign. Under the guidance of the great Superintendent Tang Ying (1682-1756), the potters were able to absorb and emulate the distinctive qualities of early Ming prototype as evident on the use of cobalt on the present piece, which has been carefully applied in imitation of the characteristic ‘heaping and piling’ effect of the originals. In form and decoration, the present piece closely copies a Yongle prototype of which only one example appears to be extant, from the Sir Percival David Collection and now in the British Museum, London, illustrated in Regina Krahl and Jessica Harrison-Hall, Chinese Ceramics. Highlights of the Sir Percival David Collection, London, 2009, no. 28, p. 61. 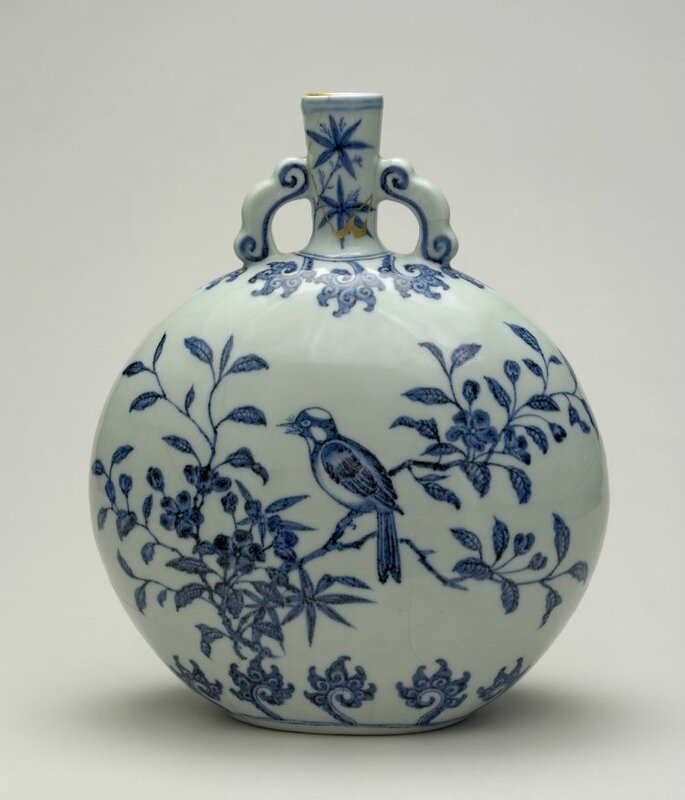