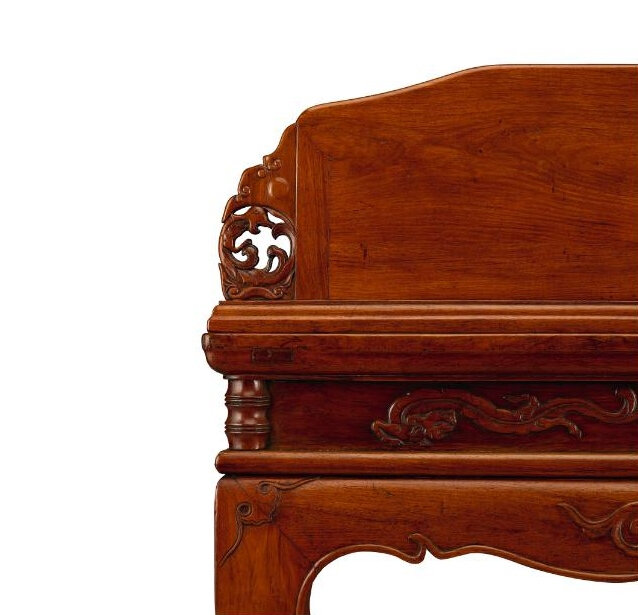 of superb quality, the rectangular seat frame of standard mitre, mortoise and tenon construction, supported on a straight, constricted waist exquisitely carved with bamboo-form dividers on the sides and at the corners, depicting on the long front three rectangular cartouches enclosing a pair of chilongs confronting stylised cloud scrolls, between a pair of archaistic phoenix, the short sides each with a further pair of chilongs, the reverse with three abstract begonia-shaped panels, all above a wide, beaded, curvilinear apron carved with interlocking lingzhi scrolls, foliate tendrils and ruyi-shaped corners, mitred, mortise and tennoned into and half-lapped onto four thick square-sectioned cabriole legs terminating in scrolled feet, the back and arms each of standard mitre, mortoise and tenon construction, the side panels each gently curved and finishing with a shaped spandrel carved with an archaistic kui dragon medallion in openwork.

Twenty-five years ago, a collector asked me to evaluate a huanghuali luohan chuang that he had been offered in Hong Kong. After making arrangements to see the piece, I was guided to a small storage facility located on a narrow side street just off Hollywood Road. Interestingly, the chuang was completely disassembled in pieces that were laid out on the floor. Nonetheless, after looking over the various components, it was apparent that it was a high-waisted form with cabriole legs, and the railings were of an unusual style fitted with plinth-like bases. Without the proper tools to assemble the entire piece, I could only loosely place legs together with the apron, waist elements, and railings to get sense of the overall proportion (fig. 1). At that time, I recognised a unique form with excellent workmanship; and not only was it in original condition with undisturbed surfaces, there didn’t seem to be a single piece missing! Understandably, my collector did not hesitate to acquire the piece. A few years later in 1999, we selected this chuang to be included in the exhibition and catalogue Splendor of Style: Classical Chinese Furniture from the Ming and Qing Dynasties organised by the National Museum of History, Taipei. Now, after all these years, I have been given another opportunity to review this rare high-waisted huanghuali luohanchuang. The following article will explore a few of its unique characteristics. Although the high-waist pattern is often associated with various types of cabriole-leg furniture, luohan chuangs of high-waisted form are very rare. Many cabriole-leg stands and stools are of high-waisted style. And it was also a standard convention for the canopy bed; such is the iconic moon-gate canopy bed in the Palace Museum collection, which also features relief-carved floral panels set between short vertical struts shaped as bamboo (fig. 2). This general construction pattern – with plain or decorative taohuan panels separated with short struts that rest upon additional (tuosai) moulding – can be considered an archaistic style associated with the ancient xumi pedestal platform. Nevertheless, most luohan chuangs are fashioned with the streamlined narrow waist. But when the high waist is adapted to the form as with the Sotheby’s piece, the overall style approaches the dignity of a throne chair. The stylistic variation of a high waist with narrow decorative (taohuan) panels separated with bamboo-shaped struts is a relatively early convention that pre-dates the Ming period. Amongst architectural relics, stone column bases with such ornamentation are found amongst Song and Yuan dynasty constructions. And the Nine Dragons Screen Wall at Datong, which was constructed for the residence of the emperor Hongwu’s 13th son (Prince Zhu Gui) in 1392, also reveals this well-established decorative pattern adapted to the standards of imperial architecture. Made of glazed pottery tiles, the lower section of the screen has two long rows of rectangular panels depicting auspicious dragons and other mythical beasts, and each is separated with short bamboo-shaped pillars (fig. 3). This early architectural decorative style was also adapted as furniture-making technique and often appears in high-waisted constructions. Such is the Sotheby’s luohan chuang, which also feature auspicious chi dragons decorating the high-waist panels.

Amongst hardwood luohan chuangs, the railings of this piece are also of unique style. The bottom of the railings are fitted with an architectural plinth-like base, and the side railings terminate with decorative standing spandrels. Although the plinth base is rare for hardwood chuangs, the technique was common to lacquer constructions during the Ming period. The Palace Museum collection houses two such examples including a gold-filled tianqi lacquer chuang with a Chongzhen period inscription dated to 1631 (fig. 4) as well as a black lacquer chuang with mother-of-pearl inlay decoration; similar railings on other Ming dynasty lacquer chuangs belonging to private collections are also known. The plinth base provides a secure ground for the railing as well as a visually pleasing transition from the narrow panel to the massive base. And similar to the railings on the Chongzhen period luohan chuang, the side panels of the Sotheby’s huanghuali luohan chuang also terminate with bracket-like standing spandrels with round open-work chi dragon motifs. Thus, this huanghualipiece clearly borrows its pattern from the earlier lacquer furniture tradition, and it also incorporates the decorative carving techniques that flourished throughout the late Ming and early Qing periods when hardwood furniture was in its relatively early stage of development. The carved decoration is unified around a central theme of winged chi dragons and luxuriant flowering grass. Advancing chi dragons appear on front and side waist panels as well as coiled embryonic forms within the side rail terminal spandrels. Chi dragons were popular decoration during the Warring States period and Han dynasty. Illustrations of ancient jades published in Yuan and Ming dynasty texts often depict chi dragons (c.f. fig. 5), which may have well inspired wood carving artisans during the late Ming period. Chi dragons are an immature form said to be offspring from the Nine Dragons; chi dragons with wings are an even more distinguished breed, and may perhaps intimate the rise of a majestic winged ying dragon. In this regard, the theme of winged chi dragons on this huanghuali piece may also indicate an association with an aspiring official, or perhaps even with a princeling of imperial rank.

Further indication of the quality of this piece is also evidenced in the attention given to the waist panels across the back side, which are typically undecorated; each is carved in relief with an abstract begonia-shaped (haitangshi) motif; and although a secondary pattern not intended to be seen, even here the rhythmic lines pulse with life (see pp. 138-139).

Across the front, the deep curvilinear apron is carved with luxuriant scrolling grasses flowering with lingzhi blossoms; fresh growth also sprouts out along the ends of the apron and the scrolled feet of the powerful cabriole legs. Aside from unity of motifs, the carving is unified throughout in its animated style and robust vitality, reflecting the work of a single master.

Relative to dating, this piece can be attributed to the 17th century. The animated carving style of chi dragons, fragrant grass, and lingzhi belongs to this transitional period, and as noted above, the form also exhibits technique from the initial era when hardwood furniture makers were employing technique from the earlier lacquer furniture tradition.

With these various components completely reassembled, the whole piece exhibits a robust, yet compact form that stands on powerful cabriole legs. The platform-style base exhibits the enduring tradition associated with ancient architecture. Simultaneously, the enclosing railings reach outward with gentle flowing lines marking ease and congeniality. And the naturally vivid decoration enhancing both base and railings is exquisitely integrated and unified with the overall form. Such cultivated balance recalls the Confucian adage, “If it is all substance without ornamentation, then it is rustic and unrefined. If it is all ornamentation without substance, then it is superficial like superficial trade. But when ornamentation and substance are duly blended, then it is imbued with mannered propriety.” The latter – considered the gentle yet principled characteristics of the Confucian official – are also clearly reflected in this unique huanghuali luohan chuang.