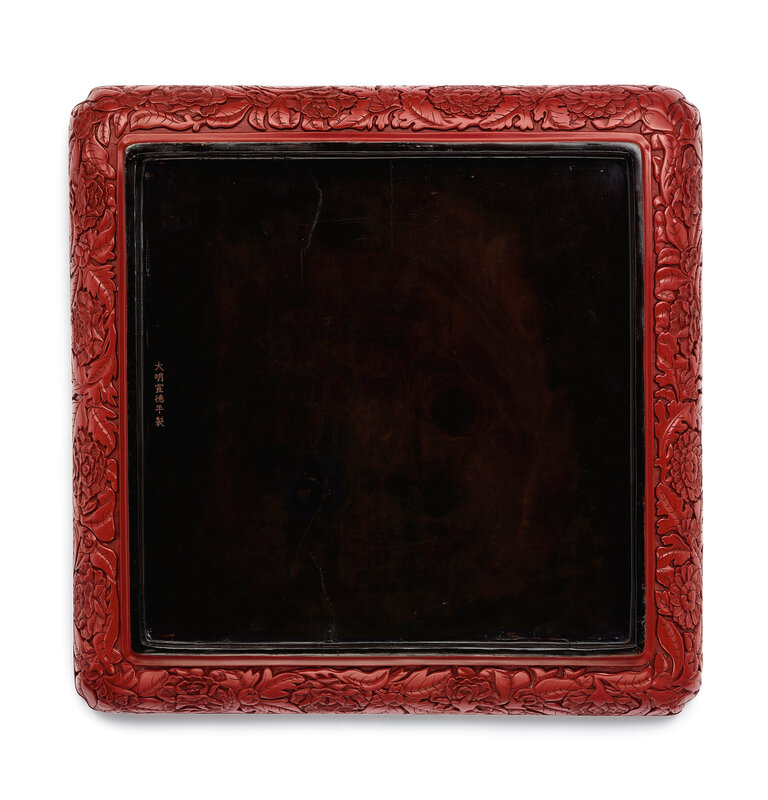 the rounded sides with indented corners, decorated to the interior with a pair of opposing phoenix in flight, both depicted with outstretched wings and finely incised plumage, hovering in front of large stems of lotus issuing from rocks, bearing ten blooms, carved in relief through the rich red lacquer down to a black guideline against a star-diaper ground and enclosed within a grooved, barbed quatrefoil band, the four corners with four smaller phoenix in front of flowering chrysanthemum, camellia, peony and pomegranate sprays, the exterior carved with a matching composite floral scroll incorporating chrysanthemum, camellia, rose and pomegranate blooms, the base lacquered brownish black and inscribed with a six-character reign mark, incised in a vertical line and gilded.

Exhibited: The Arts of the Ming Dynasty, The Arts Council of Great Britain and The Oriental Ceramic Society, London, 1957, cat. no. 237, illustrated pl. 63.
One Man's Taste, Treasures from the Lakeside Pavilion, The Galleries of the Baur Collection, Geneva, 1988-1989, cat. no. L7 and p. 5 top.

Phoenix amidst Lotus – A Masterpiece of Xuande Imperial Lacquerware

This dish represents one of the finest and largest surviving examples of Xuande reign-marked lacquerware in private hands, preserved in extraordinarily good condition. The sensitive, naturalistic rendering of the complex design of phoenix depicted opposing each other in flight, the luxuriance of the interwoven lotus design, and the large size of the piece are of exceptional quality. It would have been an extremely ambitious undertaking, and the precision of form and successful finish is a credit to the craftsmen working in Beijing.

Like with porcelain, it was in the Yuan dynasty that dishes of such massive size began to be created, and they continued to be produced to imperial order until the Xuande reign, but thereafter monumental works of this kind were practically abandoned. Equally, the superb thick lacquer layer assembled for this dish from numerous individual coatings was only rarely recreated in later periods. The soft, well-polished finish and the smooth, rounded outlines of the various motifs are also characteristic of the wares created at that time; the exuberance and complexity of the present design, however, are exceptional. The creation of a tray of this scale and quality would have been a highly ambitious undertaking, given the time-consuming process of building up a thick enough layer of lacquer by adding and preparing multiple thin coatings, each of which needs to dry before it can be polished and the next one applied, and finally carving the design into it – a process that can stretch over years

Xuande reign-marked lacquer trays of this large size are extremely rare, but another example of identical size and form, but carved with a square panel enclosing a scene of five sages, from the Qing court collection in the Palace Museum, Beijing, is illustrated in The Complete Collection of Treasures of the Palace Museum. Lacquer Wares of the Yuan and Ming Dynasties, Hong Kong, 2006, pl. 55.

The design on the current tray is however very closely related to that found on another famous Xuande reign-marked lacquerware – the table in the Victoria and Albert Museum, London, illustrated in Ming: Fifty Years That Changed China, The British Museum, London, 2014, p. 106-7, fig. 97 (fig. 1). The precision and carving of the design on the upper surface of the table of a dragon and phoenix soaring amidst a dense ground of lotuses and foliage amidst quatrefoil panels precisely matches that on the current tray. The stylistic elements are so similar – the precise treatment of the feathers, wings and tails of the phoenix, and the depiction of phoenix in reserve on the four corners – that it is likely to have been carved by the same team of artisans. The only fundamental difference is that the design on the table features a dragon and a phoenix, whereas the current dish consist of two phoenix. Compare also the closely related treatment of two phoenix on a lacquer casket illustrated in Porcelaine : Chefs-d'oeuvre de la collection Ise, Musee national des art asiatiques – Guimet, Paris, 2017, fig. 4. 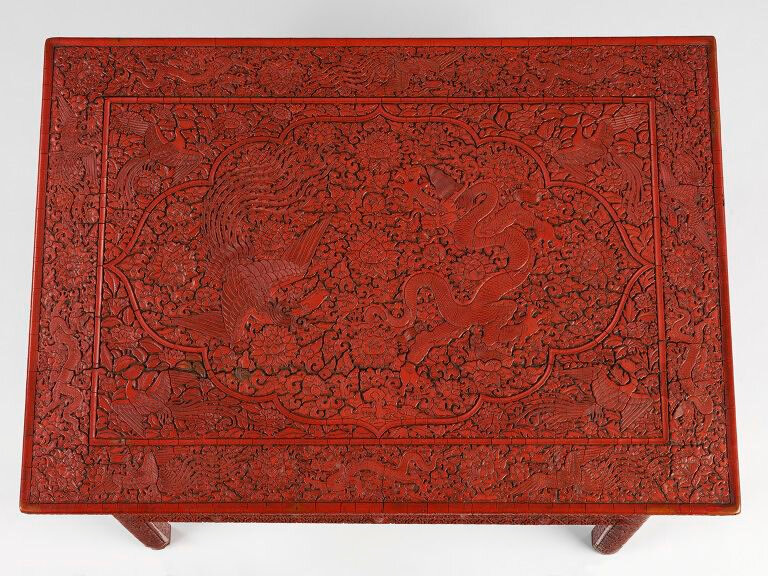 Cinnabar lacquer table, mark and period of Xuande (1425-1436). © Collection of the Victoria and Albert Museum, London.

The design can also be found on a Xuande period cloisonné basin in the Uldry collection, illustrated in Helmut Brinker and Albert Lutz, Chinese Cloisonné: The Pierre Uldry Collection, London, 1989 (German edition Zurich, 1985), pl.19 (fig. 2), where the authors argue that the birds are differentiated by the treatment of the long tail feathers to distinguish between the male and female bird. They also illustrate, ibid., fig., 55, a stone relief from the ruins of the Mongol capital Dadu, dated to the second half of the 13th century. Carved with two phoenix within a quatrefoil, each with a different long tail plume, the decoration is remarkably similar to both the cloisonné basin and the current lacquer tray. Clearly this imperial Yuan decorative motif was a prototype for the design used in Xuande imperial works of art. 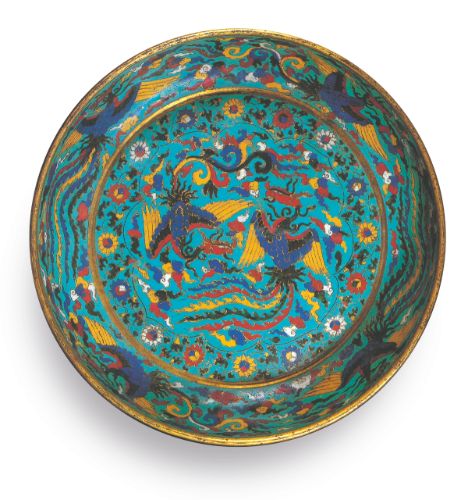 The phoenix emblem was also a regularly used design motif on the highest quality blue and white porcelain produced at the Imperial kilns of Jingdezhen in the Xuande period. For a Xuande reign-marked brushwasher (fig. 3) painted with two phoenix from the Qing court collection, preserved in the Palace Museum, Beijing, see The Complete Collection of Treasures of the Palace Museum. Blue and White Porcelain with Underglazed Red, Shanghai, 2000, vol. 1, pl. 129. As in the current tray, there is clear differentiation in the treatment of the long tails on both birds, a Xuande innovation never found on Yongle porcelain. As carefully researched by the scholars Lee King Tsi and Hu Shih-Chang, a number of lacquer wares in museum and private collections ascribed to the Xuande period are actually pieces with marks inscribed over effaced Yongle marks. In their research published in 'Carved Lacquer of the Hongwu Period', Oriental Art, vol. 19, no. 4, 2001, pp. 62-63, they discuss this phenomenon, notably on a stand included in the exhibition 2000 Years of Chinese Lacquer, Oriental Ceramic Society of Hong Kong and the Art Gallery, The Chinese University of Hong Kong, Hong Kong, 1993, cat. no. 46, which has a finely carved and gilded Xuande reign mark over a partly effaced, thinly scratched Yongle mark. They believe that Yongle marks on lacquer were not added at the workshops but later in the reign, after the pieces were moved from Nanjing to the new capital, Beijing. The exact reason why some Yongle-marked items are also inscribed with a Xuande reign mark is still unresolved. Lee and Hu have identified over thirty such pieces, several of which they have ascribed to the Hongwu period. It is possible that new lacquer pieces could simply not be provided quickly enough, when the new emperor ascended the throne, so that existing ones were re-attributed. Whereas the feeble Yongle mark seen on the cupstand is characteristic of lacquer ware and is not inscribed in this way on other works of art, the magnificent Xuande mark on the cupstand follows the official style of writing seen on Imperial porcelain of the period and, as Liu Xinyuan noted in, 'Imperial Porcelain of the Yongle and Xuande Periods Excavated from the Site of the Ming Imperial Factory at Jingdezhen', Imperial Porcelain of the Yongle and Xuande Periods Excavated from the Site of the Ming Imperial Factory at Jingdezhen, Hong Kong Museum of Art, Hong Kong, 1989, pp. 74-75, such Xuande marks were probably devised by a court calligrapher.

Certainly, the mark on the current lacquer dish fundamentally differs from those inscribed over Yongle wares. Interestingly, it is also clear that this particular design of a pair of phoenix depicted in confrontation with different treatments of their long tails is a design motif confined to the Xuande period. This strongly suggests that in contrast to other lacquerwares traditionally assigned to the Xuande period, which are actually Hongwu and Yongle examples with later marks, the current tray is one of the few pieces which can be attributed without qualification to the Xuande period.