superbly and heavily cast seated upright in dhyanasana with hands folded in dhyanamudra, the dignified figure rendered adorned with exquisite beaded jewellery with floral settings,  the serene expression accentuated with a downcast gaze between an urna and a gentle smile, framed by a pair of pierced pendulous earlobes and a high top-knot adorned with jewellery, further clad in garment intricately detailed with floral hems and cascading in gentle folds, the red-lacquered bronze body applied with cold gilding.

Amitayus - The Buddha of Infinite Life

This magnificent large and powerfully cast gilt-bronze figure of Amitayus, the Buddha of Infinite Life, encapsulates the distinctive Imperial style created at the Qing court in the early 18th century. This complex synthesis of influences from China, Tibet and Mongolia can be seen in the legacy of Buddhist sculptures created for the temples of the Qing emperors’ summer retreat at Chengde and at the Yonghegong in Beijing and other Buddhist centres.

Like his grandmother, the Dowager Empress Xiaozhuang, the Kangxi Emperor was a devout follower and patron of Tibetan Buddhism. Originally of Manchu descent, the Qing ruling class had intermarried with the Mongol tribes and had converted to Tibetan Buddhism. With the Dalai Lama the secular as well as religious leader of Tibet, and with the Kangxi Emperor’s assumption of the protectorate over Tibet, politics and religion became inextricably linked at the Qing court. Early on during the Kangxi Emperor’s reign an office devoted solely to Tibetan Buddhist affairs known as the Office for the Recitation of Sutras was set up in the Zhongzheng Dian, the Hall of Central Uprightness established in 1697. It formed part of the Department of Ceremonial Affairs and was directly supervised by the two officials from the Imperial Household (Neiwufu). Considered the centre of all Tibetan Buddhist activities at the Qing court it was from here that Tibetan and Mongolian lamas orchestrated all Buddhist activities, commissioning many of the works of art and paintings that were then placed in the numerous temples and shrines. For personal and political reasons, the Kangxi Emperor patronised Tibetan Buddhism, erecting some thirty-five Tibetan Buddhist temples and shrines within the walls of the Forbidden City, and many more across the empire, especially at the Imperial Mountain Resort of Chengde, which he founded in 1703.

No other comparable gilt-bronze figure to the current Amitayus appears to be published. However, it shares distinct characteristics with the famous gilt-bronze figure of the bodhisattva Avalokitesvara Shadaksari commissioned by the Kangxi Emperor in 1686 on the occasion of his grandmother’s birthday, from the Qing court collection, preserved in the Palace Museum, Beijing, illustrated in Buddhist Statues of Tibet: The Complete Collection of Treasures of the Palace Museum, Hong Kong, 2003, p. 237, cat. no. 226. The same texture of naturalism is evident on the expressions of both faces, cast in similar expressions of serenity and ease, with the same treatment of their smoothly rounded chins, well-defined noses and gently curving brows. Like the current figure, the jewellery on the Palace Museum Shadaksari is intricately contained in elaborate floral settings. Other idiosyncratic features, such as the gentle folds of the robes below the knee, are present on both sculptures. The same style of bronze workmanship is also clearly visible on an unpublished gilt-bronze figure of Shakyamuni Buddha in the Weltmuseum, Vienna, dated 1681, where the cold gilding to the surface has rubbed off in places, revealing the rich red-lacquered layering on the metal, as visible on the arms of the current figure. Compare also the distinctive chignon, facial expression and similar pendulous ears on a gilt-bronze figure of Maitreya of similar size in the Yonghegong, Beijing  illustrated in Buddhist Statues in Yonghegong, Beijing, 2001, pl. 61, dated to the early Qing.

The distinctive Sino-Tibeto-Mongolian style of the current bronze sculpture can also be found on dry lacquer wood sculptures created for the temples for the Imperial Mountain Resort of Chengde. The facial features and jewellery settings can be seen on the monumental figure of Avalokiteshvara at Puning Temple, illustrated in Buddhist Art from Rehol. Tibetan Buddhist Images and Ritual Objects from the Qing Dynasty Summer Palace at Chengde, The Chang Foundation and Kaohsiung Museum of Fine Arts, Taipei and Kaohsiung, 1999, p. 28. The overall form and style of the current bronze Amitayus is also closely related to a gilt-lacquer wood figure of Amitayus in the Asian Art Museum of San Francisco (http://asianart.emuseum.com/view/objects/asitem/items$0040:11419), considered to have come from Chengde, illustrated by Terese Tse Bartholomew, ‘Sino-Tibetan Art of the Qianlong Period from the Asian Art Museum of San Francisco’, Orientations, vol. 22, no. 6, June 1991, fig. 5 (fig. 1). 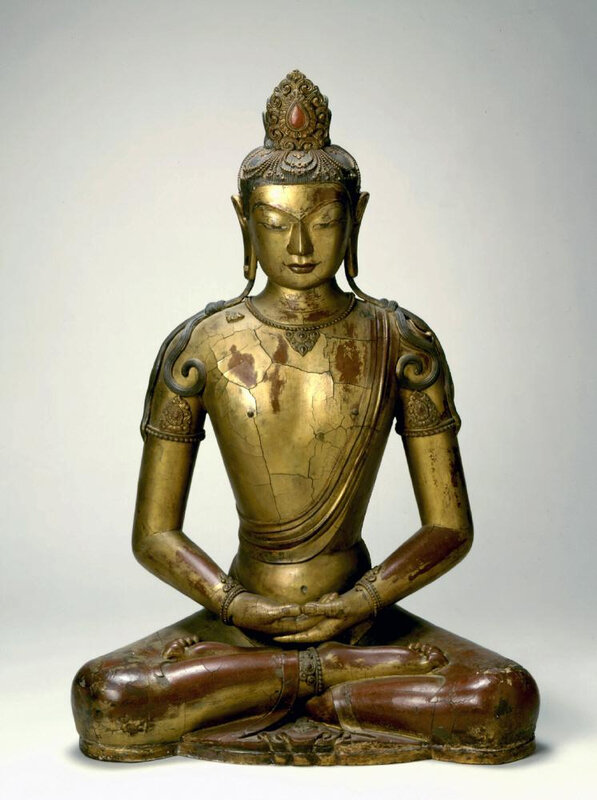 Compare also the distinctive stylistic elements on a life-size gilt dry-lacquer standing figure of a bodhisattva illustrated in Christopher Bruckner, Chinese Imperial Patronage: Treasures from Temples and Palaces, vol. II, London, 2005, cat. no. 47 (fig. 2), and now in the collection of the Capital Museum, Beijing. It shares identical treatment of a number of features, including the elaborate chignon, the elegance of the tresses of hair falling on each shoulder and the distinctive jewel settings.

Other Kangxi gilt-bronze figures sharing similar high quality bronze craftsmanship, but with more typical Chinese decorative style include a smaller gilt-bronze figure of four-armed Manjushri, also dated to the Kangxi reign and still at Chengde, illustrated in Buddhist Art from Rehol. Tibetan Buddhist Images and Ritual Objects from the Qing Dynasty Summer Palace at Chengde, Taipei, 1999, cat. no. 19. See also several examples from the large set of figures of Amitayus created in the Kangxi period, characterised by heavy high quality casting and rich fire-gilding. These include a figure sold in our London rooms, 10th July 1973, lot 100, and published in Ulrich von Schroeder, Indo-Tibetan Bronzes, Hong Kong, 1981, pl. 152b, where he suggests that these figures originally were part of one and the same group which may have comprised as many as 108 examples. Other examples from the set include one sold in our Paris rooms, 18th December 2012, lot 104, and another from the collection of Peggy and David Rockefeller, sold at Christie’s New York, 5th April 2018, lot 982. 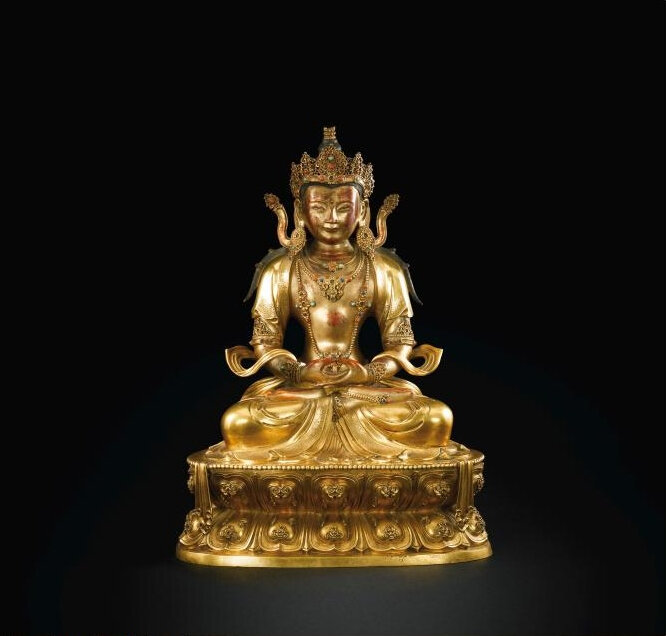