NEW YORK, NY.- Cooper Hewitt, Smithsonian Design Museum presents “Tablescapes: Designs for Dining,” an exhibition that offers a creative timeline of dining experiences through three distinct installations. At the center of the exhibition is Cooper Hewitt’s surtout de table, a magnificent, newly conserved treasure from the museum’s expansive collection of over 210,000 design objects that once ornamented the tables of French nobility at the turn of the 19th century. The exhibition also spotlights the work of the underrecognized but influential textile designer Marguerita Mergentime, active in the 1920s and ’30s, whose work has not received a dedicated museum presentation in 75 years. Pivoting to address 21st-century concerns, the exhibition debuts experimental and collaborative products commissioned from National Design Award-winning designers Joe Doucet and Mary Ping. “Tablescapes” is on view Oct. 5 through April 14, 2019.

“‘Tablescapes’ shows how taste and social values are expressed through style, materials and motifs,” said Caroline Baumann, director of the museum. “From awe-inspiring grandeur to vernacular wit to an emphasis on sustainability, the exhibition provokes a spirited conversation around design’s role in the evolution of a universal ritual.” 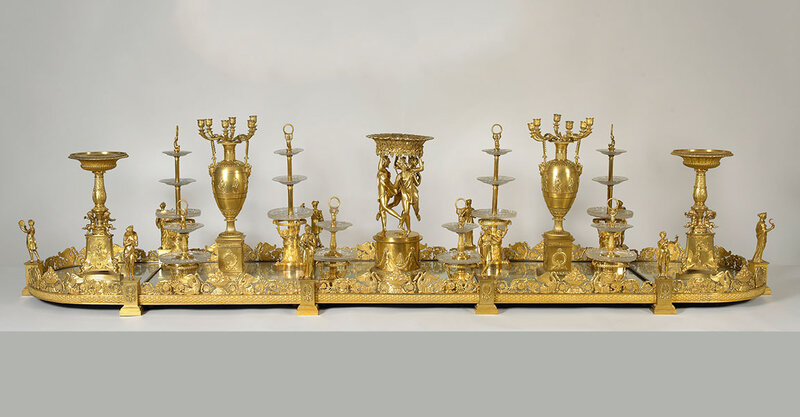 SURTOUT DE TABLE
On view for the first time in 30 years, Cooper Hewitt’s surtout de table was created in Paris around 1805 by Pierre-Philippe Thomire, a French sculptor renowned for creating gilt-bronze objects for the politically and socially powerful. It is believed that Napoleon gave this example as a wedding present to his stepson, Eugène de Beauharnais, whom he often designated to host diplomatic dinners in Paris and Italy.

To contextualize the surtout de table, it is presented with related objects, including a late 18th century Italian drawing for a surtout de table design inspired by the ruins of Pompeii and a fire-gilt and blackened bronze clock made by Antoine-Andre Ravrio (French, 1759–1814) with ornaments in the form of a woman playing piano, said to represent Empress Josephine, the mother of Eugène de Beauharnais, at her fashionable residence Malmaison. MARGUERITA MERGENTIME
Marguerita Mergentime (American, 1894-1941) began her design career in New York City in the 1920s, where she made dress fabrics and bath and beach accessories. She belonged to a circle of modernist designers that included Donald Deskey, Gilbert Rohde, Frederick Kiesler and Ilonka Karasz.

In 1934, Mergentime debuted her first designs for home linens at the Industrial Arts Exposition at Rockerfeller Center. She quickly gained recognition for her bright, modernist textile designs, which retailed at desirable department stores and were highlighted in popular magazines as essential accessories for the hostess seeking to vivify informal dining. Each of the eight napkins in the set Wish Fulfillment (1939) stimulated cocktail hour conversation with a depiction of a mystical or pseudoscientific conduit to the future—for instance, dream books or graphology—accompanied by predictions of wealth, success and happiness. Stylish and imbued with typographical interest, the tablecloth Food Quiz (1939) brought humorous, lighthearted debate to the table with conversation sparkers such as, “Do you dish the dirt before you dish the soup?”

Further illuminating Mergentime’s sensibility, the adjacent Spoon Family Gallery is dedicated to archival materials and the hanging Americana (1939), which entertained visitors at the Golden Gate International Exposition in San Francisco by uniting the names of 360 iconic American phrases, organizations, foods, points of interest and people. The Concentric and Decentric Tables and Seating, designed by Ping and the New York-based architectural firm Bureau V, can fold to seat a small group or expand to accomodate a gathering of up to nine people. Appropriately for a future of increasing material scarcity, its terrazzo-patterned surface is made not from stone, but from recyled food packaging.

Presented on the amoeba-shaped eating surfaces of Ping’s table, Doucet designed multifunctional servingware that can be used to cook, serve and store food and a set of cutlery designed for users who dine on a variety of international cuisines. Doucet fabricated the designs using 3D printing to allow for greater customization.