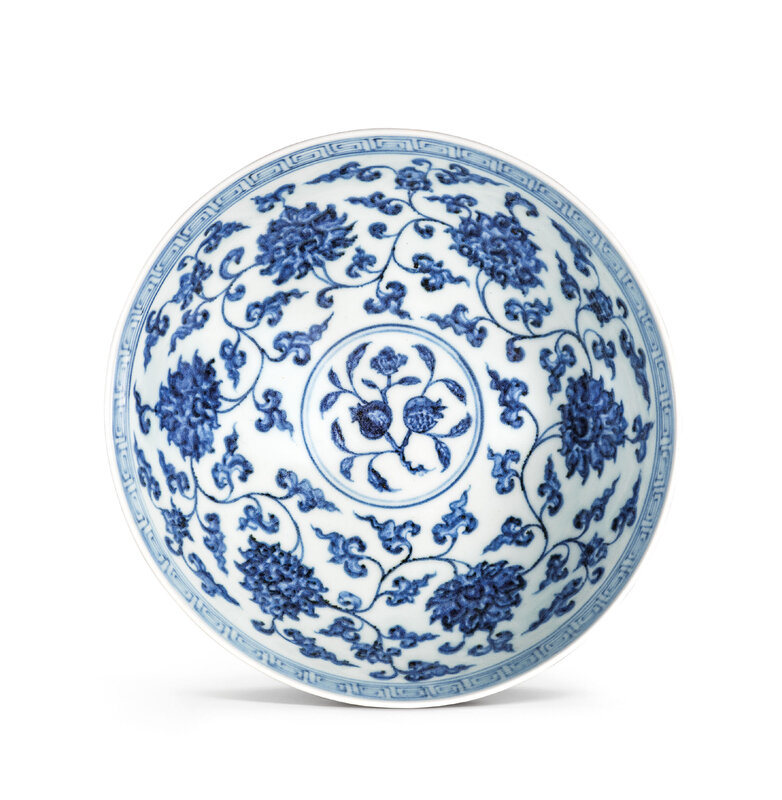 The bowl is delicately potted with deep rounded walls standing on a short foot. The bowl is decorated in a inky rich cobalt blue of varied tones. The interior with a central medallion enclosing a pomegranate spray encircled by a scrolling leafy stem bearing six stylised lotus blooms, all below a key-fret band to the rim. The exterior is decorated with two registers of slender upright petals beneath a band of tumultuous waves, wood box.

Note: The current bowl takes its name, lianzi wan (lotus bowl) from its resemblance to the form of a lotus pod. The form originated in the Yongle period, and retained its popularity through the reign of Xuande, as demonstrated by a group of Xuande-marked lianzi bowls in the National Palace Museum, Taipei, published in Catalogue of the Special Exhibition of Selected Hsüan-te Imperial Porcelains of the Ming Dynasty, Taipei, 1998, pp. 360-377, nos. 153-161.

The double-petal and wave band decoration on the exterior of this bowl is rarely seen. Compare two bowls held in the Palace Museum, Beijing, published respectively in The Complete Collection of Treasures of the Palace Museum. Blue and White Porcelain with Underglazed Red (I), Shanghai, 2000, pl. 154 and the Gugong Bowuyuan cang Ming chu qinghua ci, vol. 2, Beijing, 2002, pl. 150; one held in the British Museum bequested by Dr Stephen Wootton Bushell illustrated by J. Harrison-Hall, Ming Ceramics, London, 2000, p. 134, fig. 4:27; one in the Idemitsu Museum of Art, Tokyo, illustrated in Chinese Ceramics in the Idemitsu Collection, Tokyo, 1987, pl. 633, formerly in the collections of George Eumorfopoulos and that of Enid and Brodie Lodge; and finally one from the YC Chen Collection sold at Christie’s Hong Kong, 29 May 2013, lot 1931.