Carved in yoni form and raised above a short flat base, the rounded edge of the interior carved with a small figure of the deity Vishnu above a lotus-petal pedestal, surrounded by a mandorla, the exterior carved with a Nepalese inscription, the horn of dark-brown tone.

Note: The present bowl bears a rare documentary inscription which reads as follows:

Which may translated as:
'During the auspicious year of 798 (CE 1678), Śrīnivāsa Malla, the king of Patan (lalitapaṭṭana) and (his son) Jogalyanda Malla (commissioned this object).' 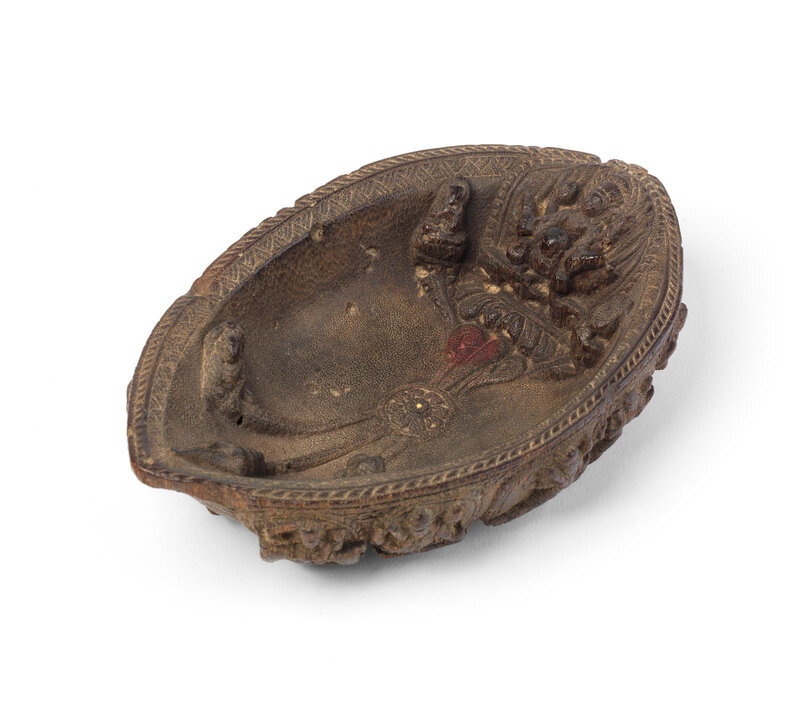 Of yoni form raised on a short shallow foot and plain flat base, finely carved in relief to the rounded end of the interior with Vishnu adorned in body ornaments and crown framed by a mandorla, flanked by another pair of deities on lotus pedestals all above a lotus blossom in the centre issuing stems with two further deities flanking a conch shell, the exterior with a row of cartouches enclosing Hindu deities, the horn of a reddish-brown tone.

Note: Vishnu, the 'All Pervader' personifying solar energy and described as encompassing the whole universe in three strides, is one of the most important Hindu deities, along with Shiva and Brahma. He sustains the universe and occasionally descends to earth assuming various forms to redress the balance between good and evil, thus he is also known as the Preserver. In time, Vishnu came to represent the traditional order of society, ever mindful of maintaining orthodox standards of behaviour, standing for law and order. Therefore, the kings of Nepal, where this bowl was made, were traditionally considered to be incarnations of Vishnu.

Vishnu's usual attributes can be seen on the present lot, including the conch shell (shanka), symbol of the five existential elements and the lotus (padma) symbol of the powers of illusion from which the universe originates and the impulse towards liberation. Beside Vishnu are probably Shridevi and Bhudevi, representing wealth and earth respectively.

See a similar Nepalese rhinoceros horn bowl, illustrated by J.Chapman, The Art of Rhinoceros Horn Carving in China, London, 1999, p.273, figs.393-394, which is offered in this catalogue Lot 84.

Compare with a related but slightly larger rhinoceros horn 'Vaishnava' bowl, Nepal, 17th/18th century, which was sold at Bonhams Hong Kong, 29 May 2018, lot 61. Of yoni form raised on a short shallow foot with plain flat base, finely carved in relief to the rounded end of the interior with Vishnu wearing crowns and framed by a mandorla, his left hand holding a club aloft with his right hand raised in reassurance, the exterior with a continuous row of cartouches each of which represent incarnations of Vishnu, the horn of a chocolate tone.

Note: J.Chapman notes with regard to the present lot that 'Whilst most of the figure carving in this group of bowls is extremely crude the carving of the decoration of the bowl shown is of a much higher standard than usual.'; see Ibid,.p.272.

The crispness and clarity of the carving around the exterior enables us to identify the different incarnations of Vishnu in order to restore universal harmony, including: a fish, a tortoise, a boar, a man-lion, a dwarf, Rama with an axe, Rama the hero of the Ramayana, Krishna's brother Balarama, the Buddha and Kalkin, who appears in a horse-headed form.

Almost all the recorded rhinoceros horn vessels from Nepal are dedicated to Vishnu, since Nepalese kings were traditionally considered to be incarnations of Vishnu. According to the sacred Vaishnava text, Vishnu Purana, a rhinoceros horn libation vessel can consume all sin. The yoni form represents the female generative organ, believed to be the seat of tejas, spiritual power and ardour. It is also worshipped as a symbol of fertility. Thus, this rare bowl would have been highly venerated for its symbolic powers as a ritual vessel.