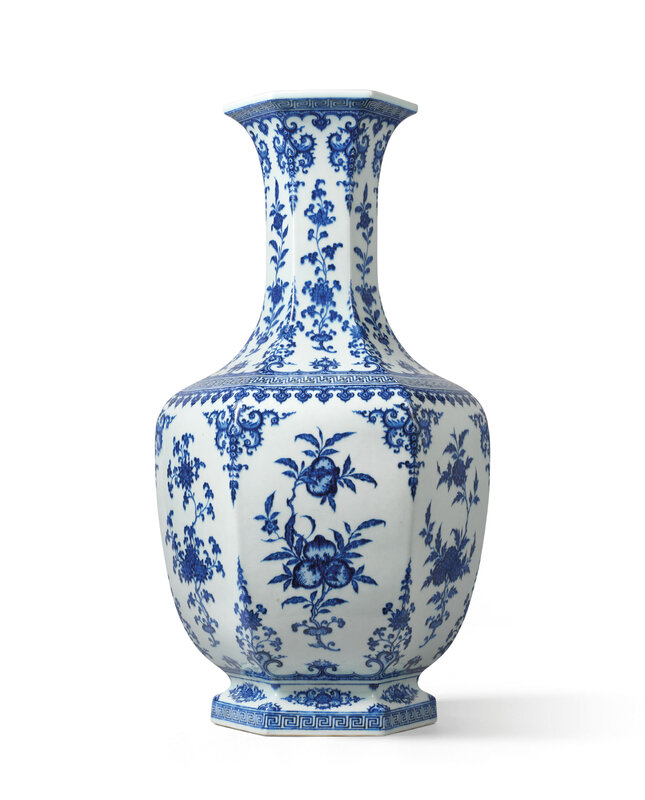 The vase is painted on the facetted sides of the body in delicate shades of blue with sprays of pomegranate, peach and persimmon alternating with branches of peony, chrysanthemum and lotus, all emerging from lingzhi fungi. The trumpet neck of conforming shape further is painted with six detached composite floral sprays, all bordered by bands of keyfret and trefoil.

Note: The current vase is particularly well painted and superbly potted amongst vases of this type. A comparable pair is displayed in the Chuxiu Gong, ‘Palace of Assembled Elegance’, in the Forbidden City, indicating that impressive and elegantly decorated vases of this type were made as display objects for the Imperial palace.

Vases of this shape and decoration were first made in the Yongzheng reign. Refer to a Yongzheng-marked example in the collection of Musée Guimet, Paris, illustrated in Sekai Toji Zenshu - Qing Dynasty, vol.15, Japan, 1983, p. 149, pl. 150. A Qianlong vase of this pattern is illustrated in Geng Baochang, Ming Qing ciqi jianding, Qingdai bufen, fig. 146. Another is included in Selected Masterpieces of the Matsuoka Museum of Art, 1975, no. 102.