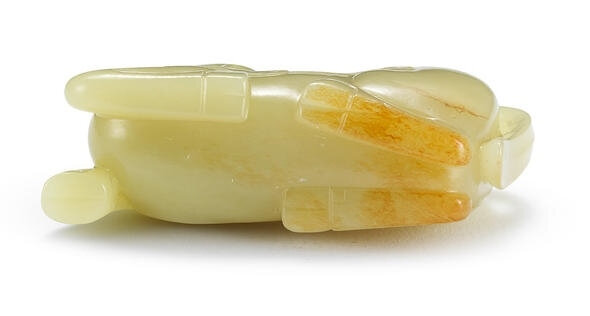 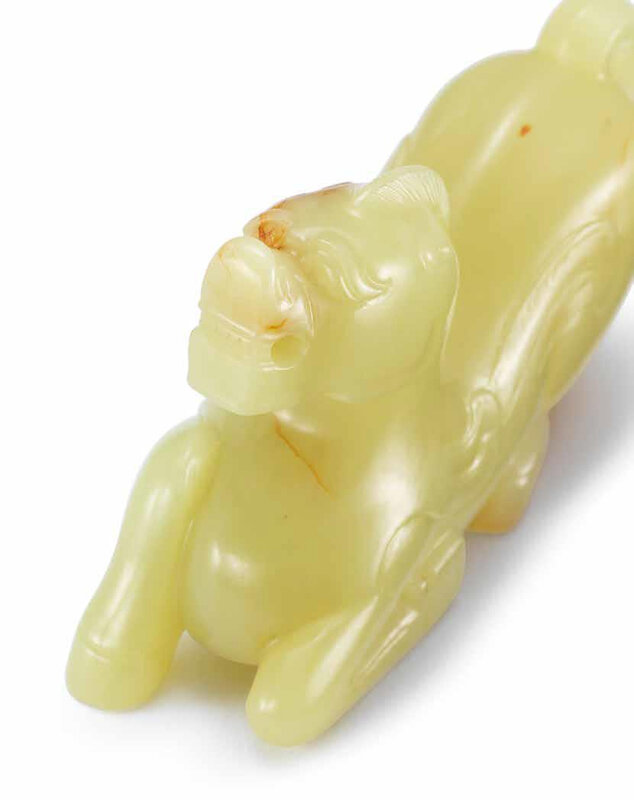 The mythical beast deftly carved as a recumbent horse with the right foreleg extended forward and the others tucked alongside with detailed hooves, its head raised in anticipation and the mouth open as if neighing, revealing the teeth, with short oval-shaped ears flanking the crested mane carved from the forehead and along its neck reaching the well-defined spine along the body raised at the back in readiness for movement, crowned with a long curved tail along the backside, the body flanked by finely incised double wing-scrolls, the stone of soft yellowish tone with russet inclusions to one side of the head and the rear legs, box.

Timothy A. Lewis, was born in Vancouver and lived with his wife Fran in Melplash Court, Dorset from 1984 to 2004, but also owned homes in London and Thailand. His father sold aircraft and held the first pilot's licence in China. Mr Lewis was born in 1937 and spent the war years as a child imprisoned in Hong Kong. After the war he was educated in America, Australia and Canada and was a talented athlete and exceptional oarsman. He supplied aircraft engines and helicopters to South East Asia.

: Lifelike sculptures of real animals and mythical beasts adorned the avenues leading to tombs and used as spiritual guardians embodying forces of the world, as can be seen in large stone statues on the tomb mound of the general Huo Qubing (d.117 BC) and in the tomb avenues of the Southern Dynasties. Large stone sculptures of winged horses were also positioned on the Spirit Road at Jianling, the tomb of the Tang emperor Suzong (d.762 AD). The interest in depicting powerful creatures in durable materials such as stone and jade, as the present lot, coincided with a growing interest in miraculous creatures as omens and portents and as links with the spiritual word; see J.Rawson, Chinese Jade: From the Neolithic to the Qing, London, 1995, pp.351-354, fig.4.

Jade carvings as the present lot, like its life-size stone counterparts, were not merely a sumptuous and highly prized display and handling objects, but were most likely perceived to have an important protective spiritual function in life and death.

The earliest example relating to the present lot is a white jade carving of an Immortal riding on a winged horse set on a rectangular base, Western Han dynasty, which was excavated at Weicheng District, Xianyong City, Shaanxi Provincen, and is now in the Xianyong History Museum, illustrated by Gu Fang, The Pictorial Handbook of Ancient Chinese Jades, Beijing, 2007, p.273. However, the present lot though sharing certain aspects, would appear to differ in the style of the horse's head. It is, however, nearer in style of carving to a related white jade carving of a heavenly horse, Wei and Jin dynasty, from the Qing Court Collection in the Palace Museum, Beijing, illustrated in the Compendium of Collections in the Palace Museum: Jade 4 Han, Wei, Jin, Southern and Northern Dynasties, Beijing, 2011, p.239, no.297. The Wei and Jin dynasty carving shares a similar posture, with the present lot depicted with a greater sense of movement, its back arched in readiness. Both carvings, in addition to the posture, share similarities in the manner of carving the tail, the eyes and eyebrows, the high crested mane and the finely incised lines on the mane and wings. See also a similar 'rectangular' mouth feature on a yellow jade winged mythical beast, Southern and Northern dynasties, from the Tianjin Museum, illustrated by Gu Fang, The Pictorial Handbook of Ancient Chinese Jades, Beijing, 2007, p.274.