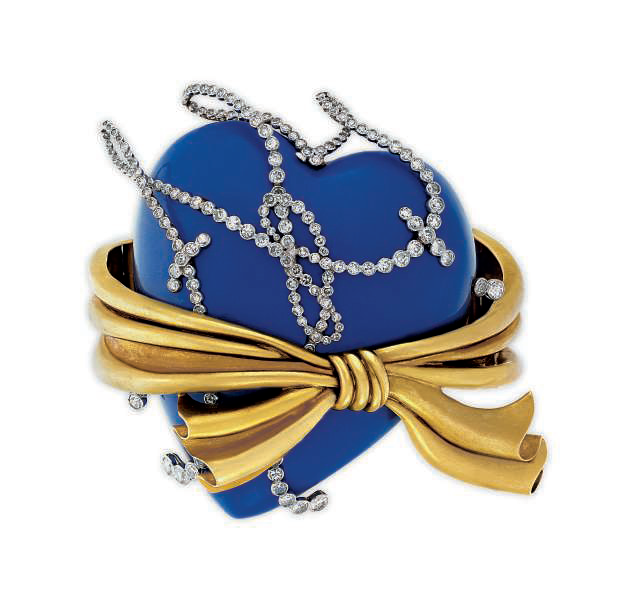 Note: Millicent Rogers was the heiress of Standard Oil and a well-known socialite in the 1930s and 1940s. As one of the most photographed women during this time, Roger’s elegance and sense of style routinely landed her on the International Best Dressed list.

Her distinctive taste was not only reflected in her fashion, but in her jewelry. She had many innovative and whimsical ideas that designers turned into striking pieces at her request. According to Elizabeth Irvine Bray in Paul Flato Jewelry to the Stars, Rogers was drawing hearts in Paul Flato’s New York office when the ‘fat hearts’ collection was born. Rogers worked with Paul Flato to commission a ruby heart brooch in the late 1930s. Complete with a yellow diamond arrow and a sapphire ribbon with the words, ‘Verbum Carro,’ Rogers was pictured wearing the brooch in Harper’s Bazaar (1938) and Vogue (1939). This whimsical Flato brooch was sold at Christie’s in April 2015 for $425,000.

The present lot, Lot 344, is an exceptionally rare enamel, gold and diamond bracelet by the house of Boivin. Ronald Balcom, Millicent Roger’s third husband, commissioned the bracelet in 1939. Of similar motif to Roger’s Flato brooch, Boivin’s bold blue enamel heart and heavy gold ribbon is reminiscent of the translucent gemstones used by Flato. Instead of the words ‘Verbum Carro,’ the diamond ribbon is a stylized monogram of the letters ‘M. R.’, a tribute to Balcom’s wife.

Millicent Rogers donated much of her fashion collection to the Brooklyn Museum, including dresses by Charles James, Mainbocher, Adrian and Elsa Schiaparelli. This Boivin bracelet remains an iconic piece of fashion and jewelry history so it is no surprise that Andy Warhol eventually acquired it for his personal collection. Warhol was not only a celebrated pop artist, but an avid collector of various categories, including jewelry. The act of collecting was an intrinsic part of the artist’s life; he would almost daily rummage through antique stores, local galleries, flea markets and auctions to find hidden treasures and bargains. Warhol was likely drawn to this ‘Beribboned Heart’ Boivin bracelet for both its whimsy and its provenance.

The distinct style of René Boivin is highly sought after by today’s collectors. Like many famous jewelry houses, the House of Boivin has its roots in the 19th Century. By the time René Boivin established his workshop in 1890, he was already known as one of the most talented young jewelers in Paris. From the beginning, he shunned the mainstream ideas of jewelry design in favor of a more eclectic vision. Exploring new motifs and materials, he created jewels with precious gemstones, but also enjoyed the freedom of color provided by semi-precious stones and enamel. It is this sense of adventure and creativity that established René Boivin as the jeweler of the intellectual elite. After his death in 1917, his wife, Jeanne Boivin, assumed control of the firm. She continued to share with the world René Boivin’s vision, joined by their daughter, Germaine, and designer Juliette Moutard.

When Juliette Moutard first started at Boivin, she was conscious of remaining true to the house’s style and history. A gifted designer and artist, she studied past drawings and worked in tandem with Madame Boivin and Germaine Boivin to ensure continuity. Like René Boivin, Moutard favored botany and naturalistic themes, however, she was equally skilled in abstract drawing. Germaine often indulged in surrealism and together they explored motifs of romanticism and fantasy.

Typical of the house of Boivin, the few existing examples of ‘beribboned heart’ jewels are sculptural and bold. Lot 344 is an exceptional example. With polished gold and opaque blue enamel, the design has strong emotional overtones and captures movement. The circular-cut diamond detail adds a pop of bright light and whimsy. It is a rare find with excellent provenance – undoubtedly the product of these three innovative women who kept the spirit of René Boivin alive through their jewels.