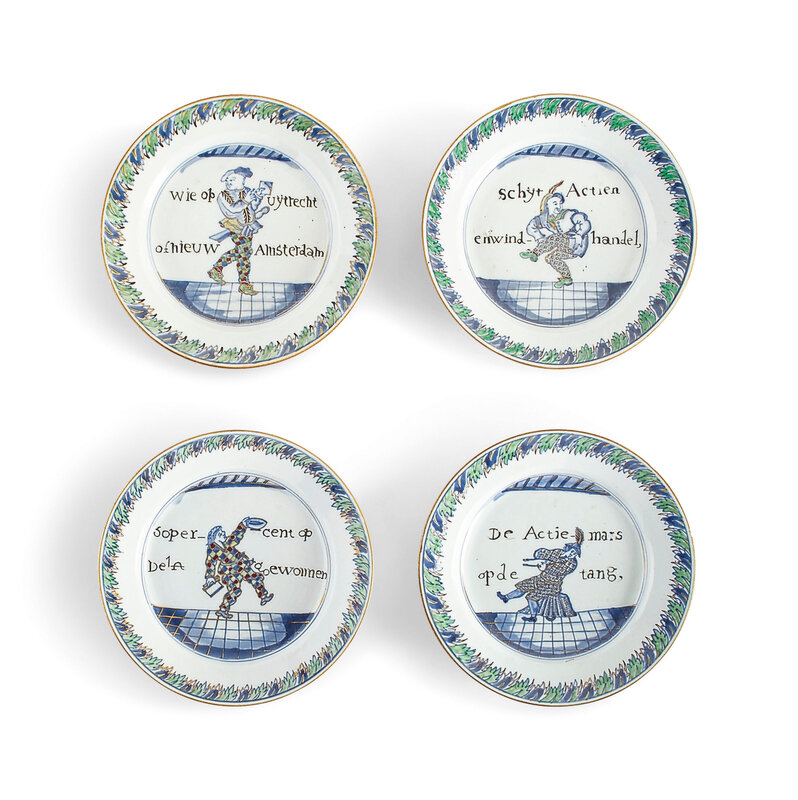 Each enameled with a Commedia dell'Arte figure wearing a chequered costume above a tiled floor, the border with a band of leaves in blue, green, iron-red and gilt.

Note: The 'South Sea Bubble' was a rampant, widespread 1720s financial speculation that led to financial ruin and even imprisonment in both Holland and England. Spoofs of the foolish and greedy investors were published in many media, often using the popular Commedia dell'Arte Harlequin to mock investor buffoonery. One influential satirical work published in Amsterdam in 1720 was titled This great Theatre of Folly, representing the origin, progress and downfall of the South Sea Bubble in France, England and Holland. Engravings of this type eventually made their way to China, to be copied onto porcelain.

This set of four is from the best-known series of export "Bubble" plates, with Commedia figures in doucai enamels alongside Dutch inscriptions lampooning both swindlers and speculators. This version, with its exaggerated poses of Harlequin, whose features have become almost Asian, was found in the Dreesman Collection, no. J-83, sold Christie's, Amsterdam, 16 April 2002, lot 1309 (a set of five plus one repeat).