A fine famille-rose 'boy and chicken' cup with imperial poem, fanggu mark and period of Qianlong, dated to bingshen year (1776)

A fine famille-rose 'boy and chicken' cup with imperial poem, fanggu mark and period of Qianlong, dated to bingshen year (1776) 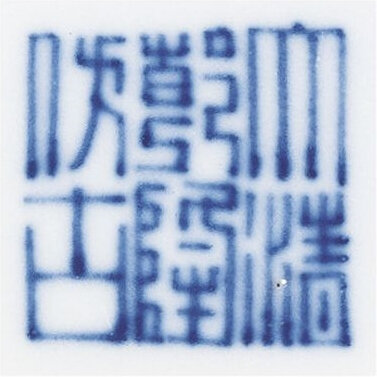 finely potted with steep rounded sides rising from a recessed base to a slightly everted rim, meticulously painted on the exterior with a boy approaching a rooster, a hen tending four small chicks behind the rocks, the scene further decorated with blooming peonies and roses, inscribed with an Imperial poem by the Qianlong Emperor, dated to the bingshen year of the Qianlong reign corresponding to 1776, the base bearing a six-character seal mark in underglaze blue.

Cups of this type derive from Chenghua doucai prototypes, and the poem here inscribed acknowledges that the design is an adaptation of the earlier chicken cups. For a translation of the poem and a description of the subject, see the exhibition catalogue, For the Imperial Court, op. cit., p. 98.