"Caravans of Gold, Fragments in Time: Art, Culture, and Exchange across Medieval Saharan Africa" at The Block Museum of Art

"Caravans of Gold, Fragments in Time: Art, Culture, and Exchange across Medieval Saharan Africa" at The Block Museum of Art

EVANSTON, Ill. - An ambitious new exhibition will showcase the splendor and power of the lost kingdoms and commercial centers of Africa, using centuries-old artifacts from sites around the Sahara Desert and artwork from West and North Africa, Europe and the Middle East that reveal the reach of Saharan networks, in a firstof-its-kind show that will open in January.

The Block Museum of Art at Northwestern University’s “Caravans of Gold, Fragments in Time: Art, Culture and Exchange Across Medieval Saharan Africa” is the first major exhibition to highlight West Africa’s global reach in the medieval period of the 8th to 16th centuries by looking directly at its material remains through loans from Mali, Morocco and Nigeria.

By exploring the global impact of Saharan trade routes on a medieval economy fueled by gold, the exhibition upends historical misconceptions and demonstrates Africa’s influence on medieval Europe, North Africa, the Middle East and beyond.

“Caravans of Gold” will debut at the Block Jan. 26 through July 21, 2019, before traveling to the Aga Khan Museum in Toronto (fall 2019) and the Smithsonian’s National Museum of African Art in Washington, D.C. (spring 2020). 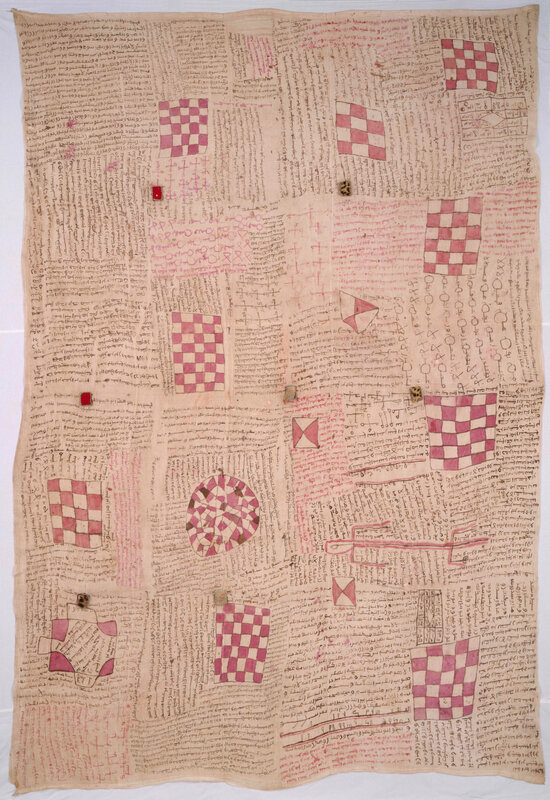 Presenting more than 250 artworks and fragments spanning five centuries and a vast geographic expanse, the exhibition features loans from partner museums and institutions in Mali, Morocco and Nigeria, including many items which have never been presented in the United States.

Manuscripts from Timbuktu, Mali, emphasize the role that the shared language and culture of Islam played in the expansion of African exchange networks while an extraordinary cast copper sculpture from Nigeria and a finely carved ivory sculpture from France raise questions about the interdependency of materials that are ubiquitous to the medieval period.

A companion book of essays, co-published by the Block Museum of Art and Princeton University Press, expands the focus of the project and is designed to serve as a significant new resource on the subject, based on the most up-to-date research across fields of study.

“Caravans of Gold” is curated by Kathleen Bickford Berzock, associate director of curatorial affairs at the Block, who has worked closely with an interdisciplinary advisory team of art history, archaeology, history and comparative literature specialists working in sub-Saharan Africa, North Africa and Europe. Berzock was curator of African art at the Art Institute of Chicago before coming to the Block. “The legacy of medieval trans-Saharan exchange has largely been omitted from Western historical narratives and art histories, and certainly from the way that Africa is presented in art museums,” Berzock said. “‘Caravans of Gold’ has been conceived to shine a light on Africa’s pivotal role in world history through the tangible materials that remain.”

Yusuf Usman, former director general of the National Commission for Museums and Monuments in Nigeria and a contributor to the “Caravans of Gold” publication, believes this collaboration is an essential opportunity for museum goers and exhibition partners.

“The richness of our collections has made us a very important resource for telling the story of Africa’s significant contribution toward civilization,” Usman said. “These ‘fragments in time’ are key to conjuring a new vision of the past,” Berzock said. “We have a unique opportunity to use art history to contextualize these fragments and to use the special context of the museum to make visible the story of the thriving African cities and empires that were foundational to the global medieval world."

“This exhibition is an act of retrieval, bringing together far-flung links to the past in order to correct and enlarge previous scholarly interpretations of medieval Africa,” said Lisa Corrin, the Block’s Ellen Philips Katz Director.

“Fragments, probably the hardest materials for a museum to make visual sense of, hold pride of place here,” Corrin said. “We are inviting visitors to ‘read’ fragments, as archeologists do, to imagine the past.” The wealthiest man in history

A key figure in the story of sub-Saharan trade is Mansa Musa, the 14th-century king of the Empire of Mali. His kingdom-controlled access to one of the most productive gold regions in the world, making Musa one of the wealthiest people in history. The exhibition conjures Musa’s pilgrimage to the Islamic holy city of Mecca through luxury objects that relate to descriptions of his stay with the sultan of Cairo, Egypt. During his travels his caravan reportedly carried 100 loads of gold, which he famously distributed along his route to the holy site and back.

Recently excavated fragments of fired clay molds, used to cast blank gold coins for trans-Saharan trade, also will be included in the exhibition, contextualized with new research by Northwestern materials science professor Marc Walton and postdoctoral fellow Gianluca Pastorelli, who worked in consultation with British archeologist Sam Nixon. These modest fragments disprove common assumptions that West Africa was merely a route for trade rather than a hub of great economic wealth, commerce, and production. The “Caravans of Gold” exhibition includes an unprecedented number of loans from the national collections of Mali, Morocco and Nigeria, never before seen in the United States, including from Mali irreplaceable terracotta sculptures, manuscripts and the delicate remains of woven indigo-dyed cloth from the medieval period that are among Africa’s oldest surviving textiles. From Nigeria come sculptures in bronze and terracotta, some dating as early as the 9th century. And from Morocco there are gold coins, glazed ceramics and carved stucco architectural embellishments.

Works that illuminate the play of borders and territories hold a central role in the exhibition. The terracotta figures from the Bankoni Region of Mali, on loan from the Art Institute of Chicago, are self-representations of people involved in trans-Saharan trade. A richly hued 14th-century Italian painting of the crucifixion covered with gold leaf, on loan from the Walters Art Museum in Baltimore, is one example of the many treasures on view from the Western canon. In the context of the exhibition, the work — embellished with gold that likely was transported along Saharan caravan routes — takes on an entirely new dimension. Central to “Caravans of Gold” is the innovative use of precious archeological fragments, some minute in size, in the form of broken pieces of glazed and unglazed pottery, colored shards of glass vessels, copper and iron work, glass and semi-precious stone beads, and extremely rare wisps of textiles, that together animate the imagination.

“The Block Museum of Art is committed to telling stories that expand and challenge mainstream art histories,” noted Lisa Corrin. “Caravans of Gold is an exhibition that exemplifies this commitment and celebrates Northwestern University’s unique strengths in championing innovative research, fostering interdisciplinary connections, and cultivating global perspective. A network of institutional and international partnership allows the museum to serve as the connecting hub for a project that spans continents and millennia." A selection of excavated finds from Essouk-Tadmekka, including fragments of glazed ceramics (among which is an oil lamp), stone beads and semi-precious stones, a cowrie shell, a fragment of silk textile, a carved stone torso, and vessel glass fragments. Institut des sciences humaines, Mali. Photograph by Clare Britt

Unlike the more traditional art museum focus on masterworks grouped within periods and geographical area, “Caravans of Gold” utilizes a cutting-edge curatorial approach, juxtaposing fragments with artworks from across regions and time frames, and drawing revelatory passages from medieval texts in Arabic that describe Saharan trade.

The many artworks on display help fill in the pieces of this puzzle. A thumbnail-sized fragment of Chinese porcelain, unearthed from the medieval trading center of Tadmekka, Mali, is displayed next to a complete 12th Atlas of Maritime Charts (The Catalan Atlas) [detail of Mansa Musa], Abraham Cresque (1325–1387), 1375,Mallorca.Parchment mounted on six wood panels, illuminated.Bibliothèque nationale de France. century Quingbai bowl from China, its exact match in color and material. Other groupings amplify meaning. A delicate 13th-century ivory figure of the seated Virgin Mary with Christ on her lap made in France, a treasure of the Metropolitan Museum of Art of New York, is placed nearby an equally masterful figure of a seated man cast in pure copper in the same century. Made at Ife, Nigeria, and found at Tada, a trading center on the Niger River, it is possible the figure was c ast from copper mined in Western Europe that was imported along the same Saharan routes that brought African ivory to Europe. The exhibition illuminates the global connections that link these objects. 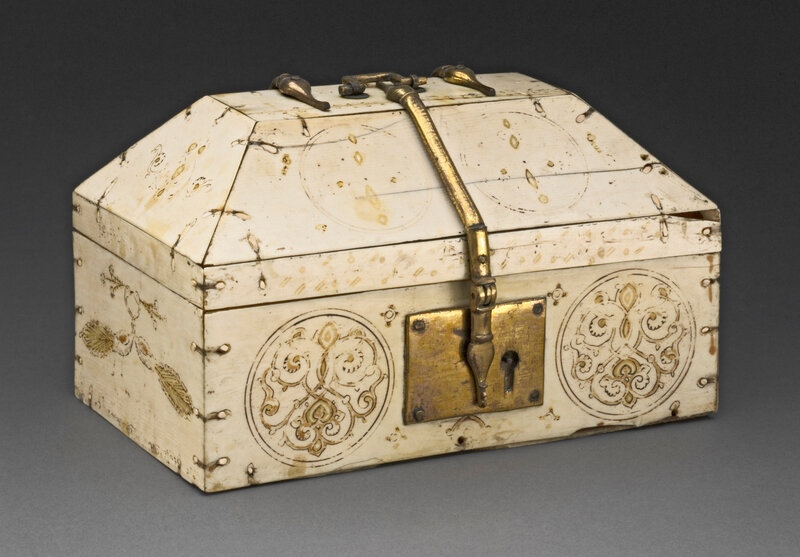 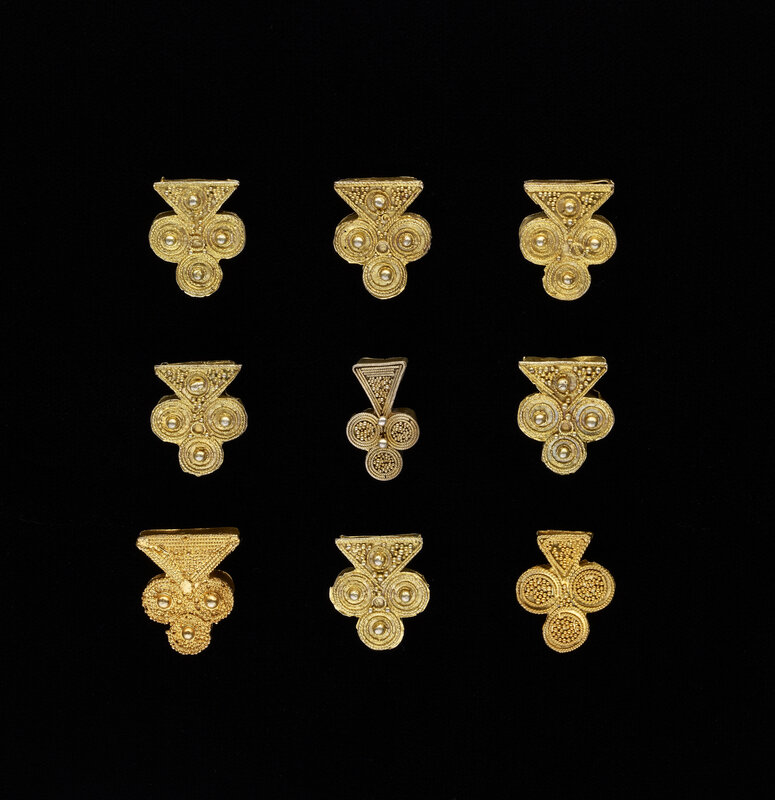 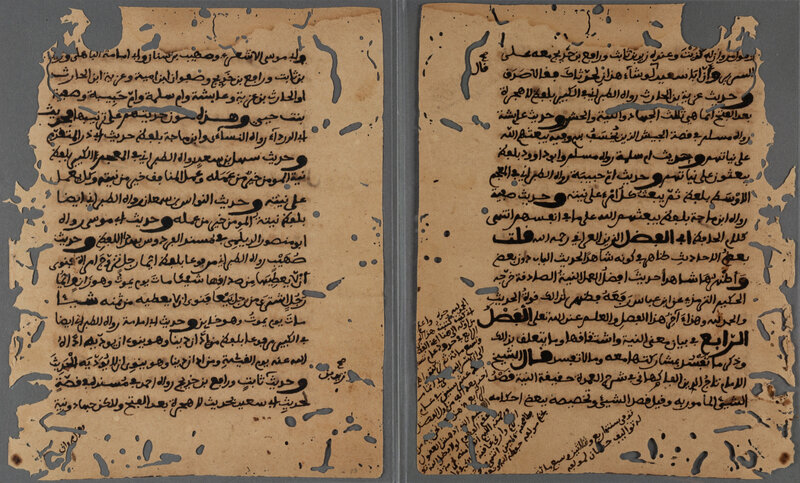 Commentaires sur "Caravans of Gold, Fragments in Time: Art, Culture, and Exchange across Medieval Saharan Africa" at The Block Museum of Art