FLORENCE - Cecilie Hollberg, Director of the Galleria dell'Accademia di Firenze, is delighted to open the rich programme of events devised by the museum for 2019 with an exhibition entitled New Acquisitions 2016–18.

The exhibition, which runs from 22 January to 5 May 2019, showcases a number of masterpieces that have joined the museum's permanent collections thanks to the commitment shown by several different organisations, skilfully coordinaed by the Director who has devised and curated the entire project.

The exhibition sets out to acquaint the general public with the tireless involvement of the Galleria dell'Accademia di Firenze, universally known for its superb collection, not only in conservation work but also in increasing its artistic heritage. New Acquisitionsallows the public to explore the ways in which this intense activity pans out on several fronts and in several different directions. Over the period under consideration the Galleria purchased four fragments of an altarpiece on the antique market; a sculpture by Lorenzo Bartolini entered the collection thanks to a generous donation; two panels were entrusted to the Galleria after being impounded by the Carabinieri Corps' Art Heritage Unit; and four paintings were allocated to the Galleria from a storage facility at the Certosa di Firenze.

This small but magnificent exhibition fills me with pride – said Director Cecilie Hollberg – because it allows me to present works of art that have been bought, restored, saved from certain dispersal and returned to form part of the country's heritage. Fragments of a number of works have entered the museum's collections shorn of their context, yet thanks to their entering the museum, we can now guarantee their conservation even if, sadly, we are not always in a position to rediscover all of the original parts. The exhibition sheds light primarily on the meticulous job required to bring these works into the Gallery. Also, I have decided not to publish an exhibition catalogue but to delay publication of the Third Volume of the Scientific Catalogue of the Museum's Collections (Late Gothic) in order to be able to include the works acquired over the past three years. I am delighted to announce that we have successfully implemented the policy formulated by the Ministry for Cultural Assets and Activities' Directorate General for Museums which encourages museums to expand their collections.

Two fragments of a side panel from an altarpiece by Mariotto di Nardo (Florence, c. 1365 – c. 1424) dismantled and dispersed in the 19th century, were identified at the 30th National Florence Biennale in 2017. By pure chance, shortly after the two panels were purchased, two half lunettes identified as the panels' cusps were tracked down on the premises of a Florence antique dealer. The Galleria dell'Accademia decided also to buy the two cusps, thus acquiring all four fragments, with extraordinary timing, for the overall sum of €470,000. This considerable investment, using the Galleria dell'Accademia's ordinary funds, has allowed the country's art heritage to recover parts of a very important Italian Late Gothic work. The two panels depict, respectively, St. John the Baptist with St. Nicholas of Bari and St. Anthony the Abbot with St. Julian, while the two half lunettes portray the Announcing Angel and the Virgin Annunciate. Four works, allocated to the museum in 2016, came from a storage facility at the Certosa di Firenze. They are a Coronation of the Virgin with Angels by Mariotto di Nardo, a Most Holy Trinity by the Master of 1419; a Madonna and Child Enthroned with Angels by the Master of 1416, and a Madonna and Child with Saints by Bicci di Lorenzo. Mariotto di Nardo's Coronation and the The Most Holy Trinity by the Master of 1419 were in relatively poor condition and so they were also meticulously restored, thus allowing them to recover their full artistic worth. Most Holy Trinity by the Master of 1419. © Galleria dell’Accademia di Firenze. Madonna and Child Enthroned with Angels by the Master of 1416. © Galleria dell’Accademia di Firenze. 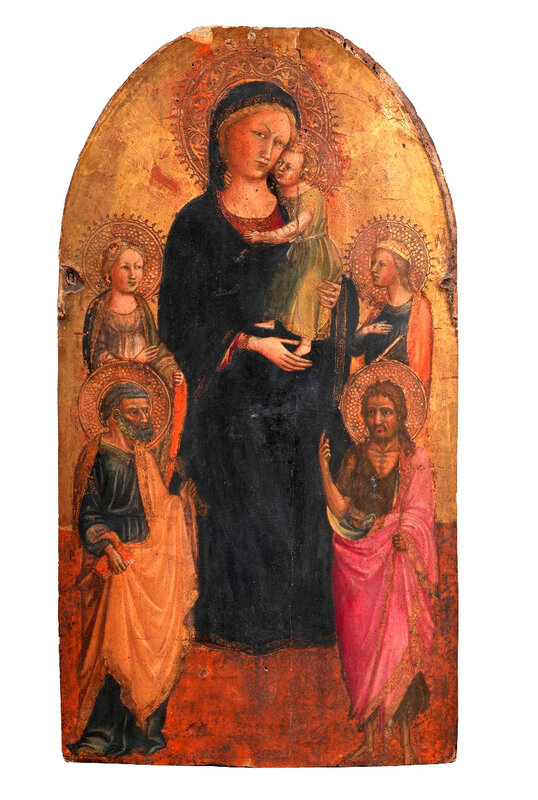 The superb gold ground works comprising Two Saints by Niccolò di Pietro Gerini and the Madonna of Heavenly Humility by the Master of the Bracciolini Chapel were entrusted to the Galleria after being impounded in the course of a brilliant operation by the Rome-based Operations Division of the Carabinieri Corps' Cultural Heritage Protection Unit. The two panels were still in Florence in 2003, at which time they were illegally exported to Switzerland. An investigation set in motion by the carabinieri under the coordination of the Rome Public Prosecutor's Office in 2006 led to the identification of a group of Italian professional people and a London antique dealer who specialised in the illegal export of cultural assets. Thanks to cooperation on the part of the Swiss judiciary authorities, the works of art were impounded and returned to Italy in 2009. With the successful conclusion of the procedure of incorporation into the country's heritage in 2018, the paintings were entrusted to the Galleria dell'Accademia di Firenze on the grounds that its collection of gold ground works is one of the most renowned and most important such collections in the world, particularly with regard to late 14th century and Late Gothic work. The first of the two paintings, depicting St Jerome and St. Julian, can be attributed to Niccolò di Pietro Gerini, a painter active in Florence at the turn of the 14th century, while the second, a panel painted for private devotion portraying the Madonna of Heavenly Humility (c. 1400), can unquestionably be attributed to the Master of the Bracciolini Chapel, an unknown painter who worked in Pistoia and its province from 1385–90 to c. 1420 and who is known to scholars for his cycle of frescoes with Stories from the Life of the Virgin in the Bracciolini Chapel in the church of San Francesco in Pistoia. Madonna of Heavenly Humility, c. 1400, by the Master of the Bracciolini Chapel (active in Pistoia and its province from 1385–90 to c. 1420). © Galleria dell’Accademia di Firenze.

This small yet dazzling exhibition winds up with a very fine bust of playwright Giovan Battista Niccolini (1782–1861) carved by Lorenzo Bartolini. The sculpture, shown at the most recent edition of the International Antiques Biennale in Florence, was generously purchased and donated to the museum by the Association of Friends of the Galleria dell'Accademia di Firenze shortly after the association was set up. The bust's history is shrouded in mystery, because it was not in the sculptor's workshop when an inventory was drafted on his death, yet it showed up in Florence a few years later at the Italian Agricultural, Industrial and Artistic Exhibition of 1861. Thought to have since been lost, the bust resurfaced on the antique market after over a century and a half and, thanks to this generous donation, it can now be displayed once and for all alongside its plaster model, which was already part of the museum's collection. The plaster model and the final version in marble, which differ only in size, portray Niccolini with an intense expression, his finely modelled hair flopping down over his forehead. The bust is likely to have been carved in 1827, the year in which the Pisan playwright brought his Antonio Foscarini to the stage at the Teatro del Cocomero (now the Teatro Niccolini) in Florence. 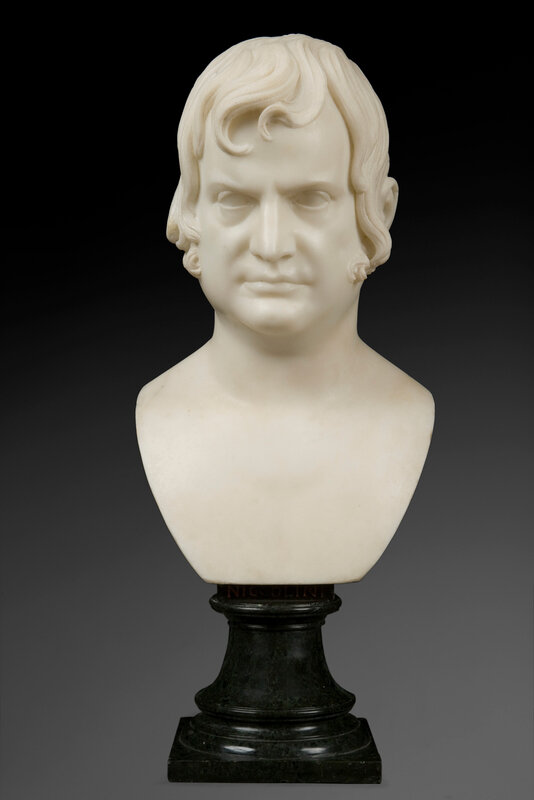 And finally, as of the start of 2019, Director Cecilie Hollberg has decided to lift the surcharge usually levied on the price of admission to the museum whenever a temporary exhibition is under way. Thus visitors will be able to inspect both the permanent collection and the temporary exhibition without any change in the regular price of admission to the museum.